The teens were arrested on Feb. 5, by the DPD homicide unit.

Allen was a musician best known for a longtime residency at Bill’s Hideaway Club and as a staple at Nordstrom’s, where he played piano for shoppers. In September, Allen survived a heart attack he suffered while driving, which resulted in a car crash. His fellow performer Denise Lee described the news of Allen's death in a Dec. 31 Observer story as “such a shock, and so hurtful.” Musician Bruce Richardson called Allen’s apparent homicide “senselessly tragic.”
click to enlarge 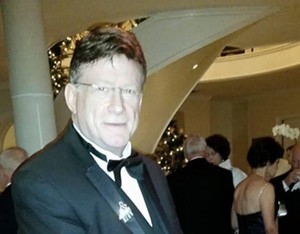 The music community mourns Paul Allen, who was found dead on Dec. 23 in an apparent homicide.
Kirk Knowles Entertainment


Howard and Curlin are charged with capital murder with bonds set at $500,000.

Dallas police said Allen was working as a delivery driver and was dropping off a delivery to someone at Lake West apartments in West Dallas when he was shot multiple times the night of Dec. 22. His body was found the next day by a passerby.

“He didn't have a real enemy,” singer Linda Petty, who knew Allen for 38 years, told us in December. “Paul was a kind man. He just simply was an all-around great guy.”
KEEP THE DALLAS OBSERVER FREE... Since we started the Dallas Observer, it has been defined as the free, independent voice of Dallas, and we'd like to keep it that way. With local media under siege, it's more important than ever for us to rally support behind funding our local journalism. You can help by participating in our "I Support" program, allowing us to keep offering readers access to our incisive coverage of local news, food and culture with no paywalls.
Make a one-time donation today for as little as $1.