The North Texas Artists to Watch in 2020 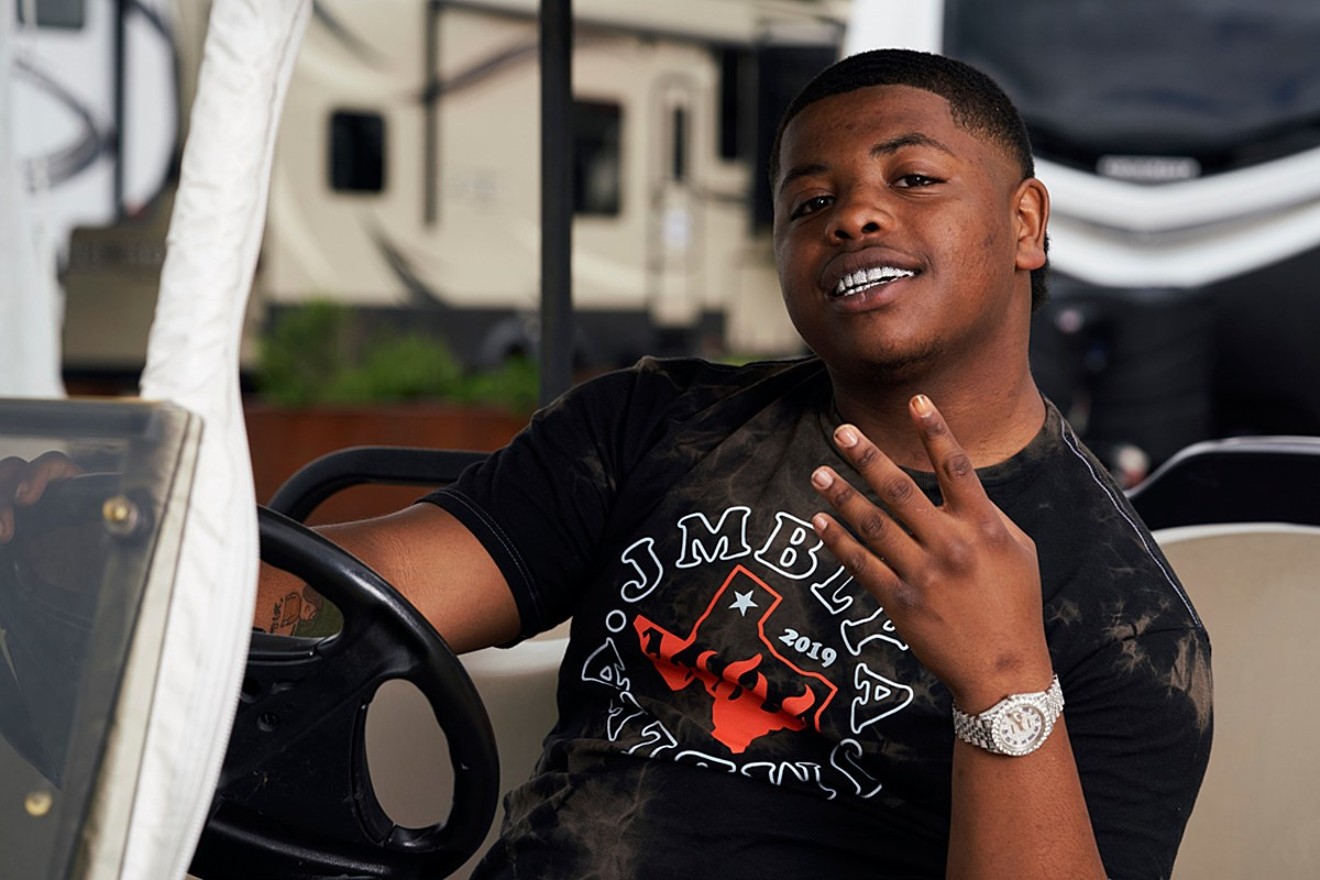 10K.Caash will be a huge hip-hop star in 2020. We're willing to bet more than 10k on it. Cooper Nelli/Getty Images

2019 was a particularly great year for the Dallas music scene. While the movers and shakers were making their mark on North Texas, these artists were laying the groundwork to make 2020 their year. As side projects come to life, new projects from old favorites emerge, and artists turn street cred into stream cred. Get ready, because here are the 10 artists we are most excited to hear from at the start of the new decade. 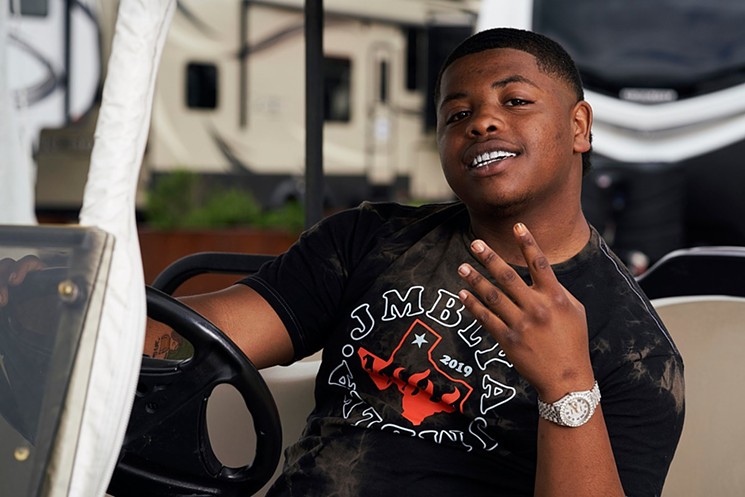 10K.Caash will be a huge hip-hop star in 2020. We're willing to bet more than 10k on it.
Cooper Nelli/Getty Images
10K.Caash
The rapper garnered over 762,000 monthly listeners on Spotify this month alone. 10K’s songwriting abilities have earned him radio success for himself and his collaborators. These accolades have built a heavy buzz for a star-studded debut album destined to come in 2020. 10K is highly publicized as one of Texas' best new artists, with rumors of upcoming collaborations with Chance the Rapper; Ski Mask the Slump God; and Billboard’s Woman of the Year, Billie Eilish. These rumors alone energized his latest hits, “Aloha” and “SwajjurKicks.” Ready for liftoff, mark our words, 10k.Caash will be an award-winning best new Hip Hop artist in 2020.
Deep Red
The side project from Rosegarden Funeral Party singer and guitarist Leah Lane and Duell guitarist Scott White released three singles in 2019, and they are set to release their first EP early in 2020. While Rosegarden and Duell have both carved out a place for themselves in the local music scene with deeply introspective takes on post-punk and metal, respectively, Deep Red allows Lane and White to have a more reactionary tone set to the tune of washed out indie rock.
Jui$e Leroy
2020 already belongs to the DFW rapper Jui$e Leroy. After putting in five years of shows and countless mixtapes, the artist born Quentin Smith has collected a legion of followers constantly fiending for his high-octane energy and uptempo music. Fortified with a strong foundation in the elite Dallas-based label, Legna Conneck Group, and by notable mentions by Curren$y, Big K.R.I.T. and the late Nipsey Hussle, Leroy’s relevant raps include a variety of rhyme styles that display impeccable talent. Jui$e Leroy’s next project, titled No White Rice, is coming in January.
Blot Out
After singer Zach Abrego returned home from a monthlong stay in a rehab facility, Dallas hardcore punk stalwarts Blot Out went right into the studio to begin working on their follow-up to 2018's Kill the CEO EP. Expected sometime in the new year, Blot Out's new release will pick up right where the band left off with a mix of scathing lyrics ranting against the powers that be and anthemic singalongs to get the pit swirling. 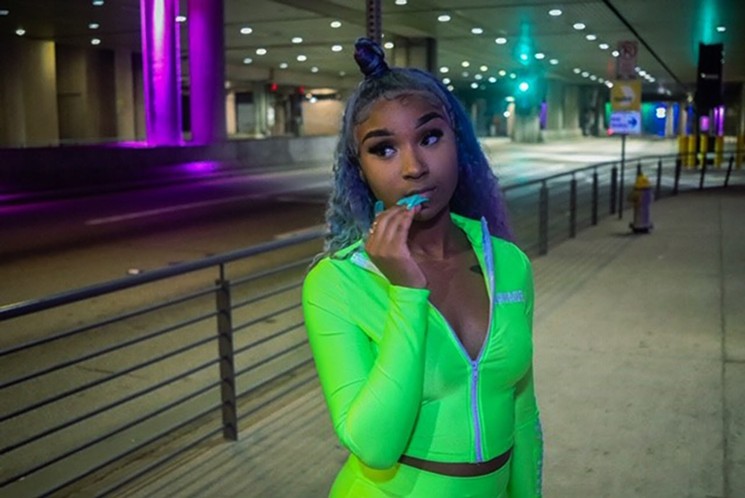 Erica Banks is a star.Periodt.
Laron McCann
Erica Banks
The self-proclaimed title “The Hardest Female Rapper in Dallas” surely comes with a lot of pressure. In 2019, Erica Banks arrived with a statement to make, and snatched the moniker with rowdy street lyrics. Her March effort, Art of the Hustle, took the triple D by surprise with blitzing trash talk, street stories from a female perspective and explosive wordplay on breakout tracks like “Talk My Shit” and “No Hook.” Aggressive, sexy, impactful, this year saw the 20-year-old bombshell receive certification through her work ethic. For 2020, the battle-tested Banks has this to say about all those who want smoke, “...Runnin' my city and can't nobody tell me different, periodt.”
Steve Gnash
Fort Worth power pop artist Steve Gnash quietly released his Las Colinas EP last year along with a signature cologne fragrance. Since then, Gnash has been hard at work getting ready for a new record and a new way of presenting his material onstage. Gnash has remained tight-lipped on what exactly he has in store for us in the new year, but he has teased that whatever it is, it is sure to be fresh and exciting.
Mo3
While plagued with charges, investigations and various other legal issues all of 2019, North Dallas rapper Mo3 magnetically became one of the city’s biggest names.  Negative publicity aside, he kept an unwavering cult-like following, Heavily praised for his catalog of glorified hood tales, Mo3's projects have drawn millions on both YouTube and streaming services. 2020 will finally be Mo3’s moment. Now the people’s champion, his impact is undeniable and it shows in his steadily growing average of 250,000 streams.
Hen and the Cocks
Denton garage rock quartet Hen and the Cocks have been making a name for themselves around DFW with their infectious high-energy performances that crowds can't resist. Led by the Patti Smith-like voice of frontwoman JoAnn Henkel and backed with hard-driving rhythms, the band has become a much sought after supporting act, opening for groups like the Koffin Kats and Svetlanas. With a release scheduled for late next year, they are sure to be headlining a show near you soon.
Angel White
Just like Kash Doll, Cardi B and Renni Rucci, it seems like exotic-entertainer-turned-hugely-successful-recording-artist is becoming the norm. That lane is left wide open for more similar transitional acts, like the buzzing Albino entertainer Angel White, who went viral with numerous raps over radio smash productions. Mixing in with her unique appeal and hybrid vocal abilities as singer-rapper, White plays into the stripper lifestyle brilliantly as she brings the culture to the forefront, simultaneously impressing audiences with in-your-face style and blunt presentation. 2020 promises an anticipated album, more freestyles and show-stealing antics that will keep making White irresistible. 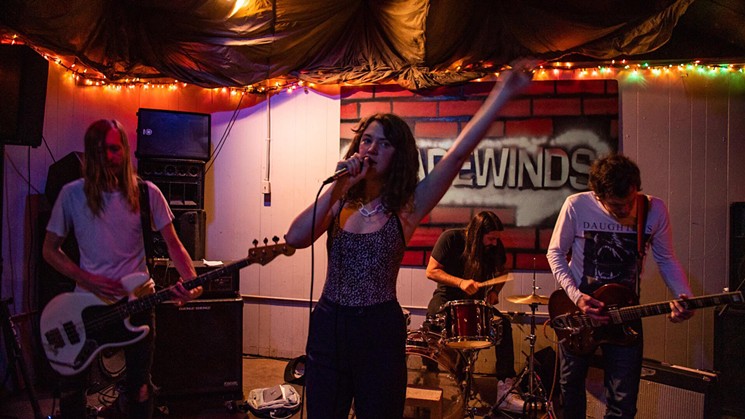 Zach Felder
Powder Room
We'd like to give you a recording or a video for Dallas art-rockers Powder Room, but there simply aren't any outside of the brief clips on the band's Instagram page (@powderroomwtf). So, you're just going to have to take our word for it right now. Drummer Billy Kuykendall has confirmed the band has been in the studio recently and expect to release their first recordings soon, but right now, the band formed in the wake of Dallas' most wildly fun band Party Static exists primarily in a live format. What we can say is that Powder Room puts on a show that is as intense as it is theatrical and should not be missed.
KEEP THE DALLAS OBSERVER FREE... Since we started the Dallas Observer, it has been defined as the free, independent voice of Dallas, and we'd like to keep it that way. With local media under siege, it's more important than ever for us to rally support behind funding our local journalism. You can help by participating in our "I Support" program, allowing us to keep offering readers access to our incisive coverage of local news, food and culture with no paywalls.
Make a one-time donation today for as little as $1.