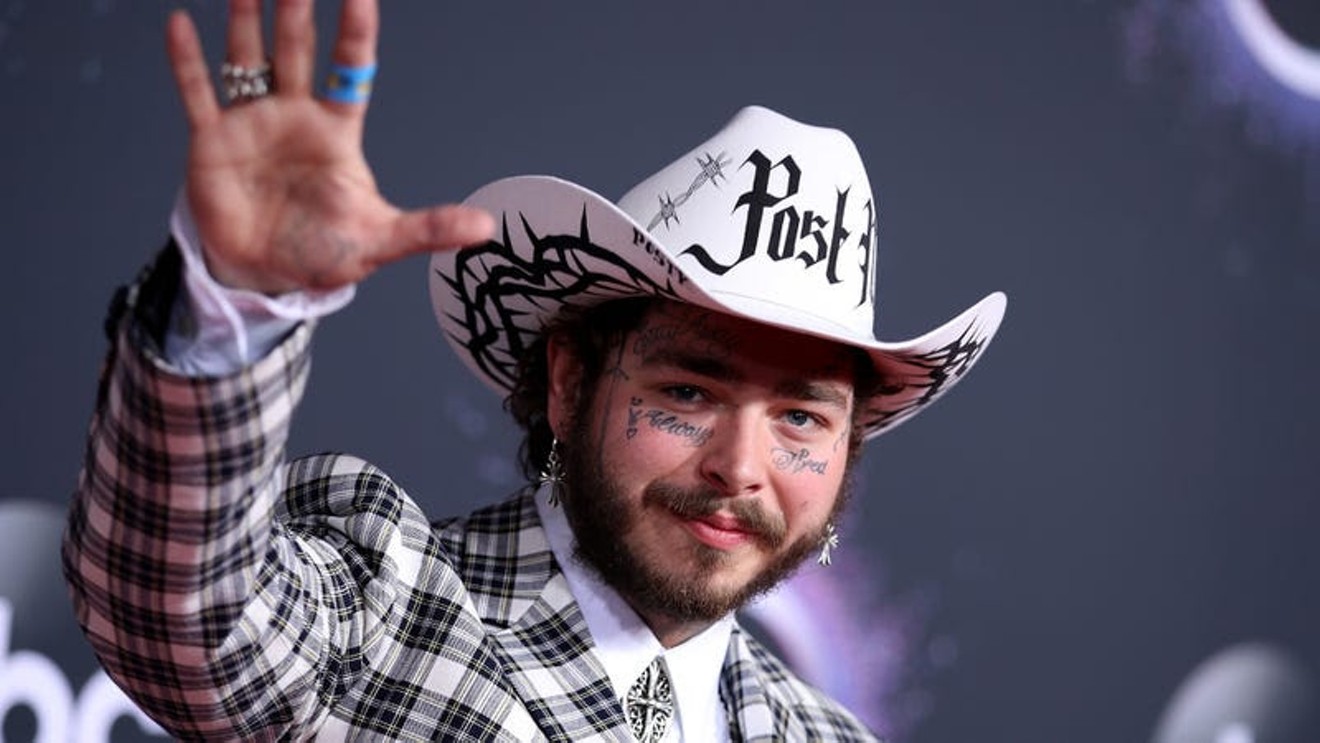 Only Post Malone can pair fine wine with Crocs, and we're buying all of it. Matt Winkelmeyer/Getty
North Texas native Post Malone is one of the most popular artists of the past decade, but he clearly doesn’t want to be defined solely by his award-winning, record-shattering music career. The rapper is heavily involved in other pursuits, including lucrative brand deals and investing in startups to the tune of an estimated net worth of $50 million. Before he carves out time in his busy schedule to play Dallas and Fort Worth back to back later this month (because he can get away with that sort of thing), here’s a breakdown of some of his side hustles that make us say, “Yeah, that tracks.”

1. Post Malone’s Celebrity World Pong League
Malone has spent much of his time in the spotlight defying expectations and raising questions such as, “Do artists have to be defined by a single genre?” and “Did he just get bangs?” With his short-lived Facebook original, the musician challenged the notion that beer pong isn’t a sport. (We tried to find out whether or not he succeeded, but Facebook Watch seems to have either deleted it or it's just a bad product that is hard to use.)

2. Gaming
As the official artist of choice for guys who think making you watch them play Call of Duty counts as a date, it would make sense for Malone to include gaming in his portfolio. In addition to releasing his own line of headsets with HyperX in 2018, Malone is also a partial owner of the Dallas-based esports organization Envy Gaming. This fits perfectly with his previously established brand of advocating for things he likes counting as sports, presumably hoping to add “athlete” to his multi-hyphenate.

3. PostyFest
This music festival may not have had the longevity Malone wanted, but it does have the distinction of being the most fondly remembered musical festival with a mixed lineup to ever happen at Arlington’s AT&T Stadium exactly once. That counts for something.

4. Weed, etc.
In 2019, Malone introduced his legal cannabis brand Shaboink, which includes pre-rolls, vape pens and his personal strain, the aptly named “Posty OG.” For those not in the know, this move makes sense for him because of everything about him and also his whole deal.

5. Rosé
In 2019, Malone’s Maison No. 9 Rosé introduced a more sophisticated side to his portfolio. The wine’s official website quotes Malone as saying, “Rosé is for when you want to get a little fancy,” and describes him as having a “love of the Mediterranean lifestyle.” The man is an enigma, and we will never truly know him.

6. Crocs
It’s a rite of passage for artists to get involved with fashion, but few have done it with such flawless brand synchronicity as Post Malone’s collaboration with Crocs. The shoe has previously been maligned in the past for being ugly, but equipped with a co-sign with Malone, consumers nationwide still think so, only they don’t care anymore because the kicks are comfy as hell.

7. Bud Light
Malone’s partnership with Bud Light is the closest a corporate brand deal has ever come to a passion project. The rapper has incorporated his choice beer into his lyrics, his merch and his aforementioned music festival, temporarily breaking AT&T Stadium’s 30-year exclusivity deal with Miller Lite, the official beer of the Dallas Cowboys. The Bud Light partnership has proven lucrative for Malone, but at this point we suspect he’d plug them for free.

8. Doritos
In 2020, Malone appeared in a Doritos commercial where he was given a makeover inspired by the chip, including a triangle face tattoo and a lavish branded outfit. By the end, he looks not that different than he normally does.

Honorable Mention: Rockstar Energy Drinks
This isn’t one of Posty's deals, but it should be.
KEEP THE DALLAS OBSERVER FREE... Since we started the Dallas Observer, it has been defined as the free, independent voice of Dallas, and we'd like to keep it that way. With local media under siege, it's more important than ever for us to rally support behind funding our local journalism. You can help by participating in our "I Support" program, allowing us to keep offering readers access to our incisive coverage of local news, food and culture with no paywalls.
Make a one-time donation today for as little as $1.