The Weeknd Is Too Good Not to Be a Star 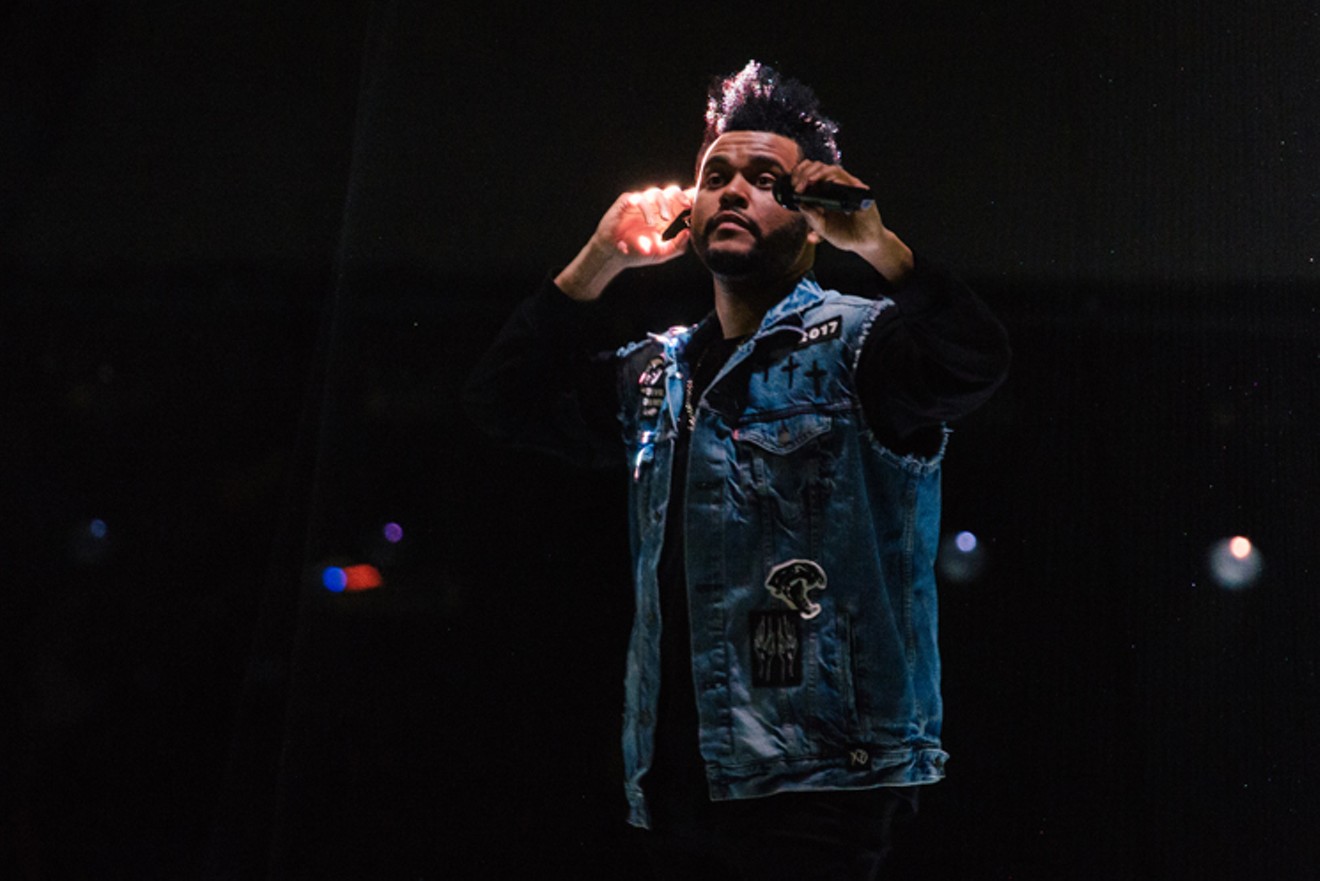 The Weeknd's voice was so good Thursday night, we thought he was using a backing track. But he wasn't. Mikel Galicia
The Weeknd
With Rae Sremmurd, Belly and 6LACK
American Airlines Center, Dallas
Thursday, May 4, 2017

The Weeknd doesn't seem like he should be a massive pop star. Sometimes, anyway. The Canadian R&B singer is a man of split personalities, an artist intent on presenting himself in an unedited fashion, a fact that can often make him seem too weird for mainstream appeal. But when he visited American Airlines Center for the latest stop of his Starboy Tour on Thursday night, one thing was clear: He's just too good not to be a star.

Last night's show marked the Weeknd's first in Dallas in three and a half years, and a lot has changed since then for the man otherwise known as Abel Tesfaye. At the time, he'd just released Kiss Land, his first full length and major label debut, after a trio of self-released mixtapes. Then came Beauty Behind the Madness in 2015, which once and for all showcased the pop hooks that had lingered just below the surface of his early work's murky emotional waters — and went to No. 1.

The current tour is the namesake of Beauty's followup, which came out last fall, and the Starboy material made up a good portion of the opening run of songs in the setlist — which, if anything, put that weird side of the Weeknd back on display. Weird in a good way, mind you: A song like "Party Monster," which came second in the night after the title track to the new album, didn't give the high-energy release that a club banger normally should. Louche and decadent, it smoldered more than it burned, stuttering and skittering along on a truncated beat.

Throughout that early run of songs, it was hard not to be reminded of Kanye West's recent Saint Pablo Tour, both in tone and presentation. Yeezy's groundbreaking arrangement, with a stage suspended from the ceiling that floated over the heads of the audience, had a clear influence on the giant platforms that hung over the Weeknd's runway, which put him out in the middle of the crowd for the majority of the night. Both shows managed to make the AAC feel more like an oversized warehouse party than a cavernous arena, which is no mean feat.

There was a telling difference, however: While West's was a stark, post-apocalyptic dance party, the Weeknd's was trimmed out in neon and punctuated by smoke machines, the chic, sleek bottle service equivalent. Even if the fans scream-sang along to his every word, there was no throng of bodies rushing back and forth following his every move. Instead they watched him with a languid detachment that matched the music, their swaying and occasional full-on dancing freeze framed in surreal fashion by the flashing strobe lights. 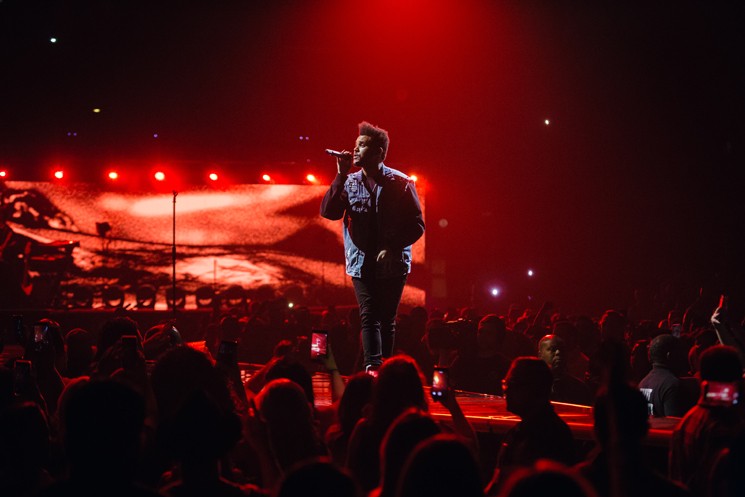 Mikel Galicia
If that all made for a show that belied stadium expectations, the Weeknd himself was another thing altogether. Running, skipping, and jumping up and down the runway, he was a flurry of energy, turning his head from side to side and gesturing to his fans with every other step. His presence had sheer star quality — not least because of his terrific vocals. While the sound at AAC was predictably lousy (the bass, in particular, was muffled and overpowering, which spoiled the early songs more than most), the Weeknd's voice was almost suspiciously clear, as though he must've been relying heavily on backing tracks. Except he wasn't: Each time he turned his head away from the mic, there was no track there to fill in the gaps.

That voice got placed front and center through the middle, and best, portion of the set, which saw the three-piece backing band take a back seat for "Tell Your Friends," "True Colors," and a song off his first mixtape, "Wicked Games." This was the Weeknd at his most fundamental, accompanied only by a minimal, pulsing beat that was there mostly for mood while his vocal modulations provided the emotional depth. He's capable of carrying the whole show on his back, and that's what he did. Even here, these weren't traditional R&B ballads; these were twisted, cerebral, and insular, his warm falsetto notes drifting through the room like Michael Jackson in a heroin stupor.

This was bracing stuff, but from there came the payoff in the third and final portion of the set, which drew prominently from Beauty's hits. The Weeknd brought out openers Rae Sremmurd for a late rendition of their song "Black Beatles" (all three of the openers got a turn to come perform one of their songs with him, which was a nice touch), and for that closing run of songs that included "In the Night" and "Can't Feel My Face" it was all big, bright hooks that turned the room into an '80s synth pop party. The bass returned for the encore of "The Hills," and it was so big and pervasive that those earlier sound issues were all but forgotten.

But that payoff didn't come easily; it came on the Weeknd's terms, only after he'd explored and displayed all those different sides of himself. That may at times have made him look like an anti-star, someone too committed to an off-center vision to ever be a household name. But there's more to him than that.