Shan and her family first moved to the United States when she was 2 years old. When she was old enough to understand the concept of ethnicity, she embraced the vast dimensions of both her Indian and American identities.

"I’ve always kind of questioned ‘Where exactly am I from? Am I American or Indian?’” Shan says. “And as I grew up, and as I've gotten older, I've realized that I'm actually both, and it's really that sense of self-identity, and where I belong, that have come to fruition.”

Shan’s favorite part about her Indian heritage is the food, and she learned how to cook with her mother.

“There’s a story behind each dish,” Shan says. Cooking traditional Indian dishes allows her to feel connected with her family in her home country. One of her specialties is also the pandemic-favorite banana bread.

Shan's father worked in information technology, which required her family to move frequently so he could meet with international clients. At age 9, when Shan and her family lived in Australia, she began taking voice lessons, training in opera and classical. Her trained vocals were accompanied by a new sound in her voice, as Shan recalls that she “even picked up the Australian accent at some point.”

Shan’s family briefly lived in India again before they moved back to the States when she was 13. Over the past five years, she’s been learning how to play piano and is teaching herself how to play the guitar and the drums.

“I'm not the best at drumming,” Shan says, “but they've definitely helped me hammer out my feelings whenever I'm feeling a little angry at something.” The passion Shan channels while playing the drums is equally present in her songwriting.

On her new track, “Lonely,” she seeks to empower women while calling men out on entitlement and toxic masculinity.
click to enlarge 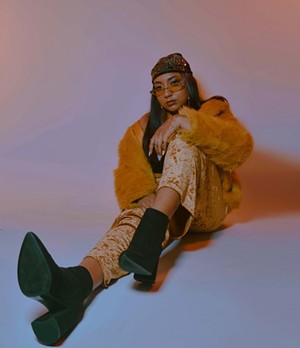 Vanalika Shan has an anthem for every social cause.
Maia Art Media
Musically, “Lonely” sounds like an amalgamation of Dua Lipa’s “Levitating” and Harry Styles’ “Watermelon Sugar,” but lyrically, the song is an anti-patriarchal anthem in which Shan shuts down a man’s advances and forces him to take a step back and examine his behavior. She was inspired to write “Lonely” after reading an article about a sexual assault victim who did not receive justice.

“Her case was just brushed off,” Shan says. "I think it was almost like a lightbulb moment in a sad way because this is more common than anybody could even realize. It happens every day, where women are put in tough situations, and they're overlooked. And that's really where ‘Lonely’ began. It’s almost like my aggressive, angry chants to the world asking why things like this happen. And then as I proceeded with the songwriting, I started approaching this from a perspective of confidence.”

As an outspoken feminist, Shan wants her music to inspire women to stand on their own and not accommodate men who feel entitled to their time. While Shan wants to bring attention to universal issues such as misogyny and sexism, she also wants to highlight places and issues that don’t get as much coverage.

As the United States seems to be slowly returning to normal, with vaccines widely available and businesses operating as they would pre-pandemic, in Shan’s home country, COVID cases are still rapidly rising. India has had over 26 million COVID cases and over 300,000 reported deaths. This crisis prompted Shan to write a song called “O2,” which is set for release later this summer.

“It's gotten so upsetting,” Shan says. “Nurses and doctors are having to pick who receives oxygen, because there is such a limited supply. ‘O2’ is really more of a cry for help from someone who's on the outside looking in at their home country to say ‘Please help in whatever way you can.’”

Shan still believes in a good future for the world. Her first name, which means “sunflower,” is one of the biggest inspirations for her songwriting. While she may touch on heavy topics in her songs, Shan wants her music to spread hope for positive change.

“I think all music should really send forward positivity and encourage people to listen to make themselves feel better,” Shan says. “That's all music is. I want to brighten the world one sunflower at a time. As cheesy as that sounds.”
KEEP THE DALLAS OBSERVER FREE... Since we started the Dallas Observer, it has been defined as the free, independent voice of Dallas, and we'd like to keep it that way. With local media under siege, it's more important than ever for us to rally support behind funding our local journalism. You can help by participating in our "I Support" program, allowing us to keep offering readers access to our incisive coverage of local news, food and culture with no paywalls.
Make a one-time donation today for as little as $1.