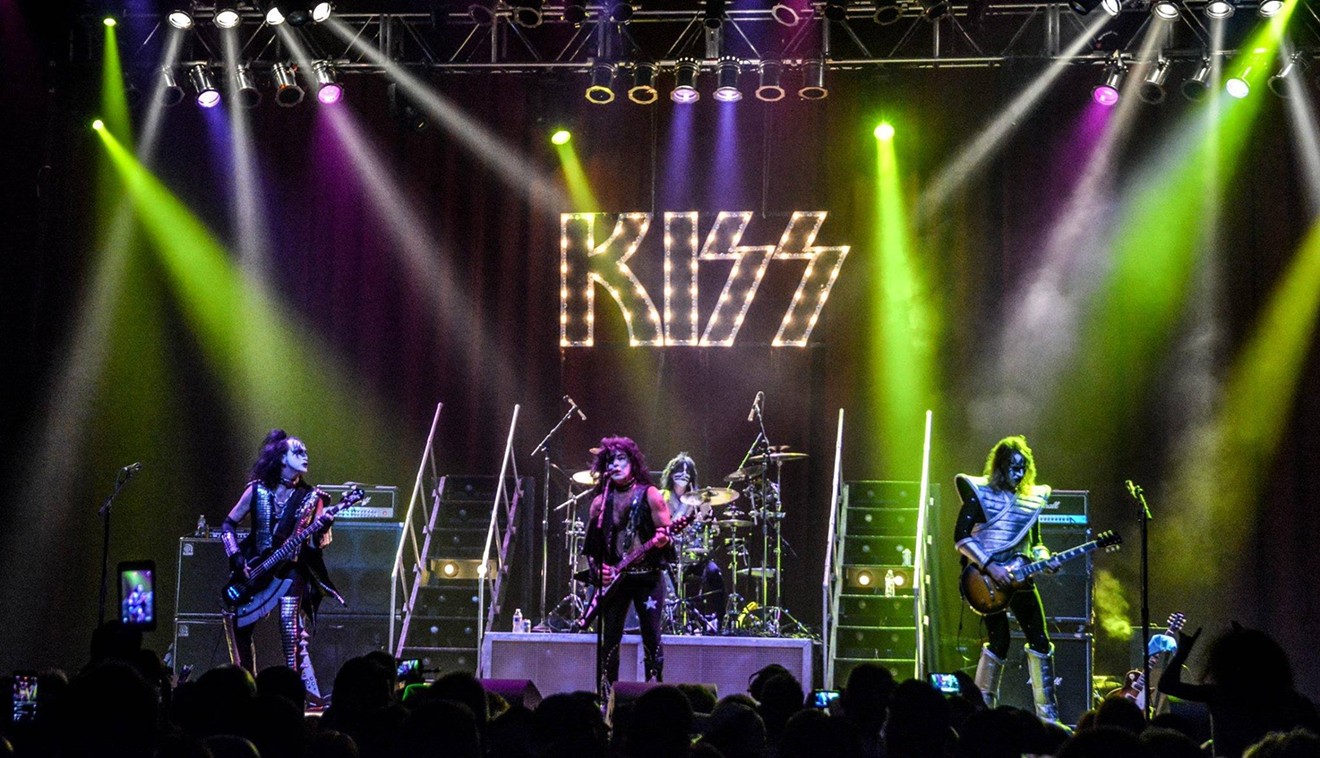 They just weren't expecting the fire to literally ignite their bassist during Saturday's Blizzfest when, during the song "Firehouse," Cleere blew a mouthful of Rum 151 at a torch he held in his right hand. As he lifted the torch in the air, he went a little higher than the 45 degree angle he normally aims for and blew. Then a gust of wind hit as a cloud of fire ignited in front of him.

The flames exploded on Cleere's right shoulder when he dropped the torch to hit the next note on his bass. It spread like wildfire over his chest and toward his black-and-white painted face and and black wig.

"I have caught my hand on fire a number of times," he says. "But it was the first time that it got on my chest and hair."

After he put the flames out, Cleere told the crowd, “That's my first time ever to catch on fire in 14 years.”

“He wasn't burned,” Thomas says, “but we could smell burning hair for a couple of songs.”

Thomas says their fan base has been waiting for something like this to happen. It's happened to Simmons on several occasions over the years. The first time occurred on Dec. 31, 1973, when he debuted his fire-breathing antics. A roadie with a wet towel saved him.


Cleere has been blowing fire onstage since the tribute band first formed in the early 2000s. According to Cleere, when the band got together its members, who are now in their 40s, were lifelong Kiss fans who simply wanted to recreate some of the Kiss magic onstage. He figured playing what he calls "Champagne gigs" would be a way to earn more money.

To accomplish this ballbusting miracle, they use the same white and black makeup as Kiss — first, Stein's clown makeup and now Mehron — to create the signature face designs, wear costumes handmade to withstand the heat onstage and set up the same large production stage show, including the massive, light-up Kiss logo backdrop.

They also channel the same passion and use the same props and gags that fuel the original band's mind-blowing performance onstage, including Frehley's smoking guitar and Simmons' blood dripping and fire breathing.

Cleere says Kiss fans are aware of what he calls "the religious videos," commonly known as the Kiss Alive concert videos, from the '70s. He says that his band learned Kiss' choreography, and he began researching Simmons' fire-breathing trick.

"The cardinal rule is never do it more than once," he says.

He decided to use Rum 151 instead of kerosene to help protect his gums and teeth. It also ignites quickly and goes out quickly, but it doesn't feel much better than kerosene when you hold it in your mouth for the right moment in the song to breath the fire.

"It already feels like your mouth is a scoured out with a Brillo pad," Cleere says, adding that the rum "feels like it is eating away your gum lining and in your teeth. It's like being out in the middle of summer with nothing to drink."

Cleere first started practicing the fire-breathing trick in 2004. He was afraid of the flame at first, so stood about 2 feet away and spit at the torch, but it wouldn't light well.

"You just have to pop it," he says. "It's like doing the whale spray in the pool with your kid."

Thomas says it's all about the pressure and keeping the rum in your mouth long enough to spray it out like a mist cloud.

“If you don't get the proper pressure out of it, it's going to go off like a napalm bomb,” he says.

Thomas says the fire-breathing trick usually takes place in the first five or six songs of the set when the band plays “Firehouse.” Not all of the venues are cool with the trick, but the group has played at Lola's in the past and never had any incident.

"A lot of times when I spray it, the rum will get on hand, so I'll swat my hand my against body to put it out," Cleere says. "It doesn’t last long. That is why rum is perfect to use."

Thomas' wife, Jenny, is the “fire girl.” She usually stands by the stage with a wet towel in case Cleere catches fire, but she wasn't able to make it to the show Saturday night.

“She's like, 'Well, that's what you get for doing it when I'm not there,'” Thomas says.

At the outdoor benefit show at Lola's, Thomas says, the band members had been watching the weather for most of the day because they heard a storm was supposed to hit. But as their set approached, it was still hot, humid and dry.

It all seemed to be going according to plan until the wind gust hit as Cleere blew the rum at the torch.

“When you play in 7-inch heels, anything can happen,” Thomas says.