Lizzo's twerk fest reminded us that we, too, can be that bitch. Rachel Parker
In North Texas, a prime central touring spot, we get our abundant share of big-name visitors. This past year was no exception, with stops by Donald Trump and Beto O'Rourke (on the same day), and by icons like Sir Paul McCartney, Cher and Billy Joel. Some stood out for their lavish productions and performers' showmanship (or not). As we begin the new year, let us look back on the best concerts that we were blessed to witness in 2019.

Beck and Cage the Elephant, Dos Equis Pavilion
With a catalog as diverse as Beck’s, with its broad range of emotions from manic to maudlin, it was hard to predict what set Dallas would receive this past July. With tour mates Cage the Elephant and special guests Wild Belle and Spoon attached to the bill, however, there were all the signs that this would be a night of high energy and hot, sweaty dancing bodies. Performing all of their hits, Cage the Elephant was threatening to upstage the show’s headliner. But, Cage the Elephant is not Beck. If the goal is to get people out of their seats and on their feet, one must come out hard. Beck didn’t waste any time getting to what is arguably his most well-known song, “Loser,” from his 1994 breakthrough album Mellow Gold. Clearly, Beck was there to have a good time, and he brought the funk-soaked rock rhythms, acid kool-aid visuals, laser lights and humorous onstage banter to back it up. David Fletcher

Erykah Badu and the Dallas Symphony Orchestra
Erykah Badu stood, clad in what seemed like a Day-Glo bodysuit adorned with a tangle of various accouterments, with her back to the audience. Above her, multicolored lights pulsed, and a projection screen displayed a riot of eye-popping images, cycling and spinning and melting into one another. Before her, seven backing musicians situated behind microphones, keyboards, drums, bass and a laptop, and beyond those bodies sat the Dallas Symphony Orchestra. The music being made, rich with tension between earthiness and sophistication, swelled and shifted and rumbled, blossomed and soared inside the gorgeous Morton H. Meyerson Symphony Center. Preston Jones

Lizzo, South Side Ballroom
Supposing God is a woman and descended to Earth in corporeal form, she would probably look and perform like Lizzo. Equal parts fed-up and friendly, eager to scold fuckboys but yearning to celebrate among her fellow women and all people, Lizzo descended upon South Side Ballroom to a rapturous reception from a flock of frenzied fans. An altar embossed with the word “Lizzo” shone a bright, beckoning white, and moments later, as the audience’s euphoria neared levels of uncontrollable glee, She emerged. “If you feel like a girl, bitch, be a boy. If you feel like a boy, bitch, be a boy. If you feel like neither, bitch, do you.” Such is the gospel of Lizzo, a body positive, self-care-preaching goddess who wants you to be yourself no matter what anyone says or thinks. Tyler Hicks 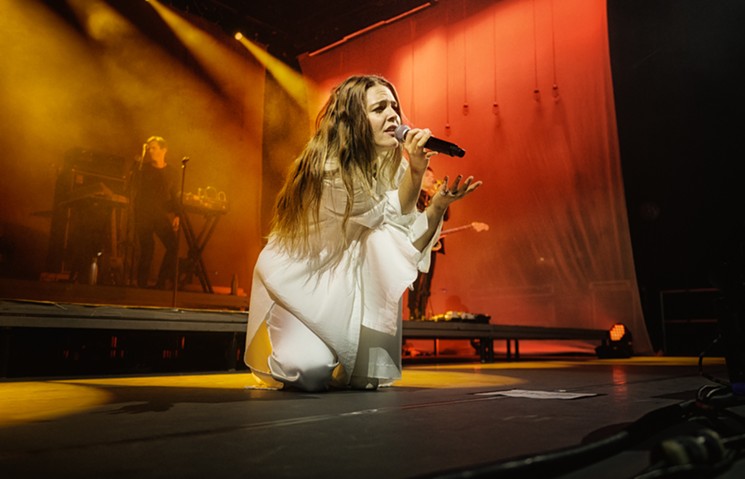 Maggie Rogers was on her knees asking audience members to REGISTER TO VOTE.
Mike Brooks
Maggie Rogers, Bomb Factory
From the moment that tasty beat from “Fallingwater” hit and the sheet came down, the show became a party. As Rogers performed tracks like “Burning,” “Say It” and “The Knife,” the audience couldn’t stop dancing. And that’s the kind of spirit Rogers brings out in people. Her joyful presence, the way she embodies her live music with such carefree movement, is a breath of fresh air in a world of calculated, polished pop-star personas. Rogers' endless energy filled up the stage. Then, it was only Maggie Rogers, her guitar and the song that left Pharrell Williams speechless three years ago — the song that led to her leaving her house in Brooklyn to depart on tour in a van with eight people. It’s meant to be upbeat and danceable, but she played it slow. It was haunting. And we loved it. Isabel Arcellana

Paul McCartney, Globe Life Park
The night was filled with inevitable emotion: To begin with, a widespread communion in a stadium bubbling under the warm night's stars, with the reverence to those passed serving as a grim reminder that a too-soon future will take the remaining half of the greatest songwriting team of all time. McCartney's older fans have had a half-century of opportunities to see him live, and they may already have, but for whatever reason, the audience seemed to be of a combined average of 40 years old. Friday's crowd was made up primarily of families with young children and grandparents. A reminder that, like no other, McCartney, with the Beatles, has united generations and disparate cultures through music. Eva Raggio

Sam Feldt, Stereolab
Both veteran and new fans were surely blown away by Sam Feldt’s Stereo Live performance in June. The electric vibes were the epitome of what is hoped and expected for an EDM show. Beyond all, the visual setup exceeded expectations, with high-quality digital imagery comparable to Kygo, or even the likes of Tipper, whose collaboration with graphic artists set the standard for modern graphic design for DJs. Alongside Feldt’s modern mixes and wildly uptempo beats, not a foot in the room was able to stand still. Ryann Gordon

Slayer, Toyota Music Factory
When they announced their farewell tour about a year ago, tributes began pouring in. It has been a helluva ride for the guys: 12 studio albums, two live albums, four gold records, two Grammy Awards and five nominations. They weathered the loss of founding member Jeff Hanneman and faced down religious groups that disapproved of their satanic lyrics. They fought the Kardashians and won. At the May show in Irving, Slayer fans seemed muzzled and only unleashed in the mosh pit that spun like a black hole in front of the stage. It may have been because the police lurked in the shadows, though their presence didn’t stop the marijuana fog from lingering over section 300, where this reporter entered the fifth dimension for 3 hours, 33 minutes. Christian McPhate 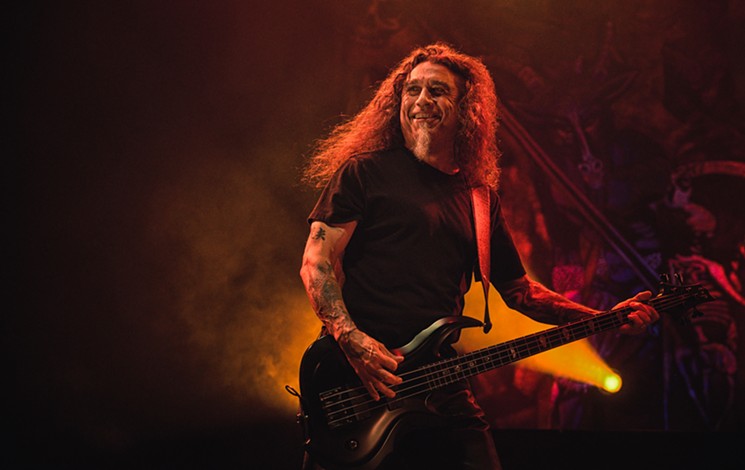 Lead singer Tom Araya swears this was Slayer's last Dallas show.
Mike Brooks
Tripping Daisy, Homegrown Festival
Tim DeLaughter, whose reunited Tripping Daisy played the festival for the second time in three years, told the audience that the park had been covered in a foot of water on Saturday. Though the ground remained a little damp, Sunday brought the sunshine. The set began with a walk through the audience by a man painted all in red in the style of the man featured on the cover of Tripping Daisy’s breakthrough album, I Am an Elastic Firecracker. DeLaughter said the man was the long-lost brother of Guglielmo Achille Cavellini, the Italian artist featured on the album cover, who had flown in from Italy to be a part of the show. The rest of the set was a career-spanning performance filled with stories of past times playing with the Toadies at the Agora Ballroom and Artists Square, news that Jesus Hits Like the Atom Bomb is set to be remastered on vinyl, and a touching memorial to DeLaughter’s grandmother and former bandmates Wes Berggren and Ben Curtis. David Fletcher

Tyler, the Creator, The Theatre at Grand Prairie
While the brooding sonics of “Igor’s Theme” fill the theater, Tyler slowly comes to life, lifting the mic to sing the occasional note. Finally, he erupts with groovy dance moves that are a mix of Pharrell and Matt Schultz. In fact, Tyler doesn’t so much dance as lurch around the stage with emotive jumps and steps that match his bass-heavy opener’s fervor. For much of the night, he is content to saunter — smoothly or sporadically — while his fans sing Igor hooks with all their might. Tyler is a master showman, but he doesn’t appear to enjoy this show. One by one, the canvas backdrops behind the artist slip away until Tyler is alone onstage. He takes a seat at a pink piano and plays a beautifully heartbreaking keys-driven version of “Earfquake.” The crowd trembles with excitement, but Tyler doesn’t return it; his back is to his fans, and he is lost in the world of a love story turned sour. Tyler Hicks

Vampire Weekend, Toyota Music Factory
There was no finer example of Vampire Weekend’s ability to walk a tightrope mood between pensive and propulsive than during its performance of hit single “This Life” on Sunday night. In just a shade over a decade (a period during which, it should be noted, the band didn’t release an album for six years), frontman Ezra Koenig and Vampire Weekend have practically lived an entire artistic life, moving from Next Big Thing to indie rock elder statesmen, this despite still being on a major label. The audience, split between a sizable pit, seats and the lawn, merrily sang along, bodies bouncing to the galloping beat, as the glittering guitar lines filled the air with major-chord melodies. Hearing a few thousand people exult in such sentiments — albeit against a gorgeously rendered sonic backdrop — is something to behold. Preston Jones
KEEP THE DALLAS OBSERVER FREE... Since we started the Dallas Observer, it has been defined as the free, independent voice of Dallas, and we'd like to keep it that way. With local media under siege, it's more important than ever for us to rally support behind funding our local journalism. You can help by participating in our "I Support" program, allowing us to keep offering readers access to our incisive coverage of local news, food and culture with no paywalls.
Make a one-time donation today for as little as $1.
Dallas Observer Staff