Tyler, the Creator’s Show Was an Exhibition of Angst and Loneliness 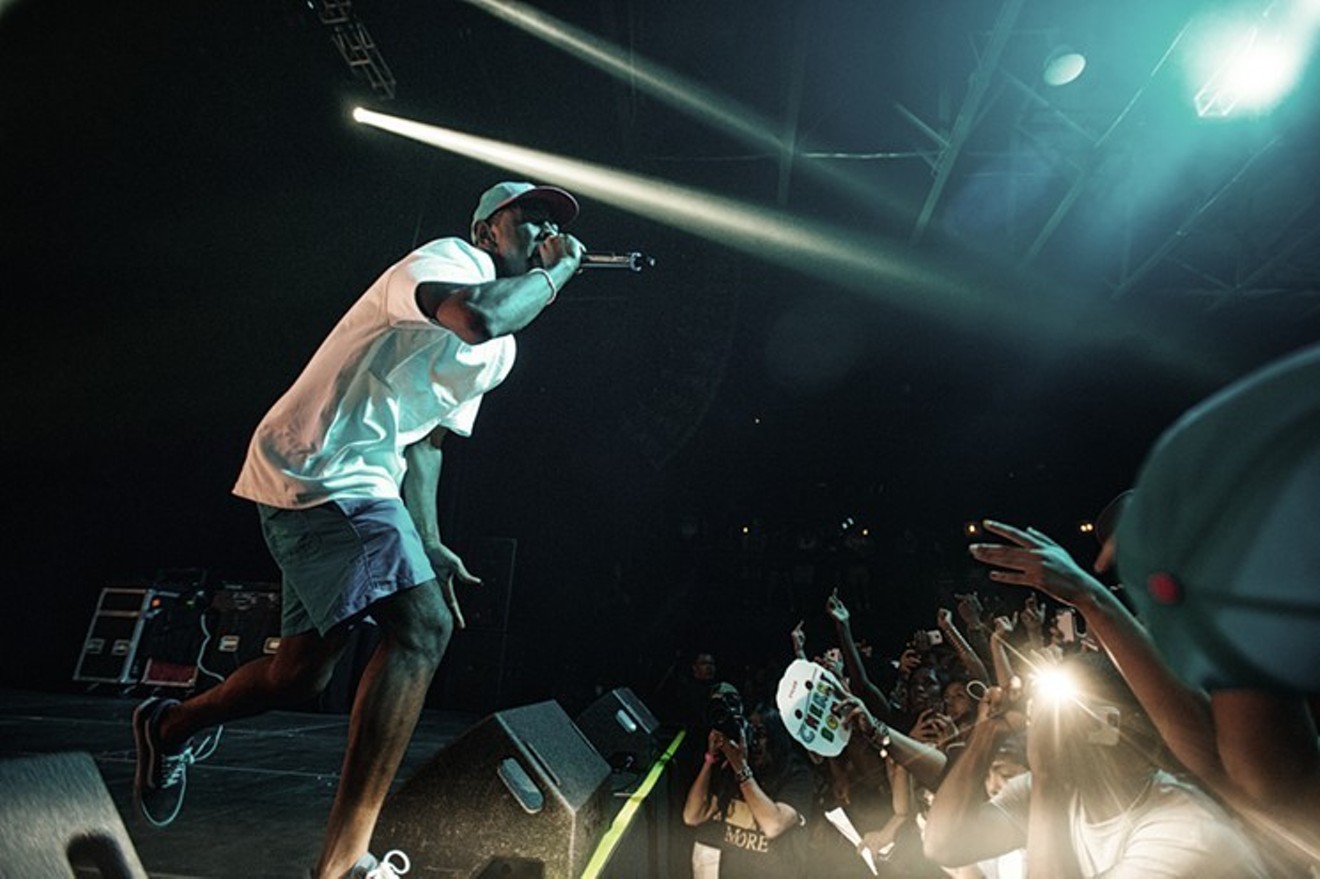 Tyler, the Creator Mike Brooks
Tyler, the Creator is late. The clock turns to 9:06, past the five-minute grace period, and the legions of fans, mostly young, begin to get anxious. This wait gives a pair of teenagers in front of me enough time to discuss the merits of Igor, Tyler’s latest album, versus Flower Boy, his much lauded 2017 release.

“The new stuff is just, wow,” Teen One says.

They’re not wrong. Igor, a 12-song record released as summer 2019 was just beginning, does represent a next level for Tyler. It’s the latest evolution for an artist who has made it his mandate to constantly evolve. To that end, Igor is less a rap album than a series of angsty ballads infused with pop and hip-hop flourishes.

Like countless other fans in the increasingly antsy crowd, both teens wore white wigs, the same kind Tyler sports in the video for “Earfquake,” Igor’s single. As the clock hits 9:15, spliffs are lit and hit, nails are bit and chants of “I-GOR,” “I-GOR” fill The Theatre at Grand Prairie.

This venue is the perfect space for a Tyler show rife with angst and redolent with weed smoke. Like the show Tyler is about to perform, the theater is a bit off the beaten path, a bit lonesome. There’s just one problem: Tyler is very late, and the audience’s only entertainment is a Tyler lookalike who rocks a blue suit and one of the white wigs. But all is forgiven when the real deal shows up at 9:22.

While the teens scream with delight, a downtrodden Tyler skulks onstage wearing a green suit and, of course, the wig. Tyler takes center stage and stands still, illuminated by a single spotlight. The screaming continues. It’s a solemn, almost haunting beginning to a show that will capture the lonely, lonesome nature of Igor, an album about a romance gone awry and the darkness that emerges from unrequited love.

While the brooding Sonics of “Igor’s Theme” fill the theater, Tyler slowly comes to life, lifting the mic to sing the occasional note. Finally, he erupts with groovy dance moves that are a mix of Pharrell and Matt Schultz. In fact, Tyler doesn’t so much dance as lurch around the stage with emotive jumps and steps that match his bass-heavy opener’s fervor. For much of the night, he is content to saunter — smoothly or sporadically — while his fans sing Igor hooks with all their might. Tyler is a master showman, but he doesn’t appear to enjoy this show.

It has its high moments, such as “I Think,” an upbeat track that sings hopefully, “I think I’m falling in love / This time I think it’s for real.” Tyler’s steps become a bit more bouncy, a bit happier, and, to the audience’s delight, he even moonwalks. Yet the happiness is short-lived, and Tyler’s dancing gives way to a creepy embodiment of a marionette for the song “Puppet.”

As he gives in to the unseen force controlling his body, Tyler croons “I’m your puppet, you control me / I’m your puppet, I don’t know me,” a chilling reminder of Igor’s central theme: losing yourself — possibly forever — to the push and pull of love.

Igor tells the story of a love triangle in which Tyler is slowly losing the person he loves to their ex. He invests so much of himself in this romance that he begins to lose who he is, prompting his alter ego, Igor, to emerge.

During Tyler’s show, Igor’s arrival is preceded by increasingly ominous behavior. One by one, the canvas backdrops behind the artist slip away until Tyler is alone onstage. He takes a seat at a pink piano and plays a beautifully heartbreaking keys-driven version of “Earfquake.” The crowd trembles with excitement, but Tyler doesn’t return it; his back his to his fans, and he is lost in the world of a love story turned sour.

When he does finally face the crowd and sing, he launches into the “Earfquake” that fans know well. But this version is bereft of its bounce, as is Tyler. He closes the song a capella, wandering aimlessly around the stage and mumbling the chorus to his hit album’s single. In this moment, he looks more like a sullen Charlie Brown than a world-famous musician.

The rest of the show includes some Tyler staples (“Yonkers,” “Who Dat Boy”) and some Flower Boy faves (“See You Again”), but they are all imbued with the melancholy mood of a man turned cold by love. As Tyler ends the set with a heartrending rendition of Igor’s closing track “Are We Still Friends?” the story comes full circle. Tyler’s lover has moved on to greener pastures, leaving the heartbroken artist to clean up his mess and leaving the fans with a burning question: Is this Tyler singing, or Igor?
KEEP THE DALLAS OBSERVER FREE... Since we started the Dallas Observer, it has been defined as the free, independent voice of Dallas, and we'd like to keep it that way. With local media under siege, it's more important than ever for us to rally support behind funding our local journalism. You can help by participating in our "I Support" program, allowing us to keep offering readers access to our incisive coverage of local news, food and culture with no paywalls.
Make a one-time donation today for as little as $1.