The Slow Death of the Electric Guitar May Be Exaggerated 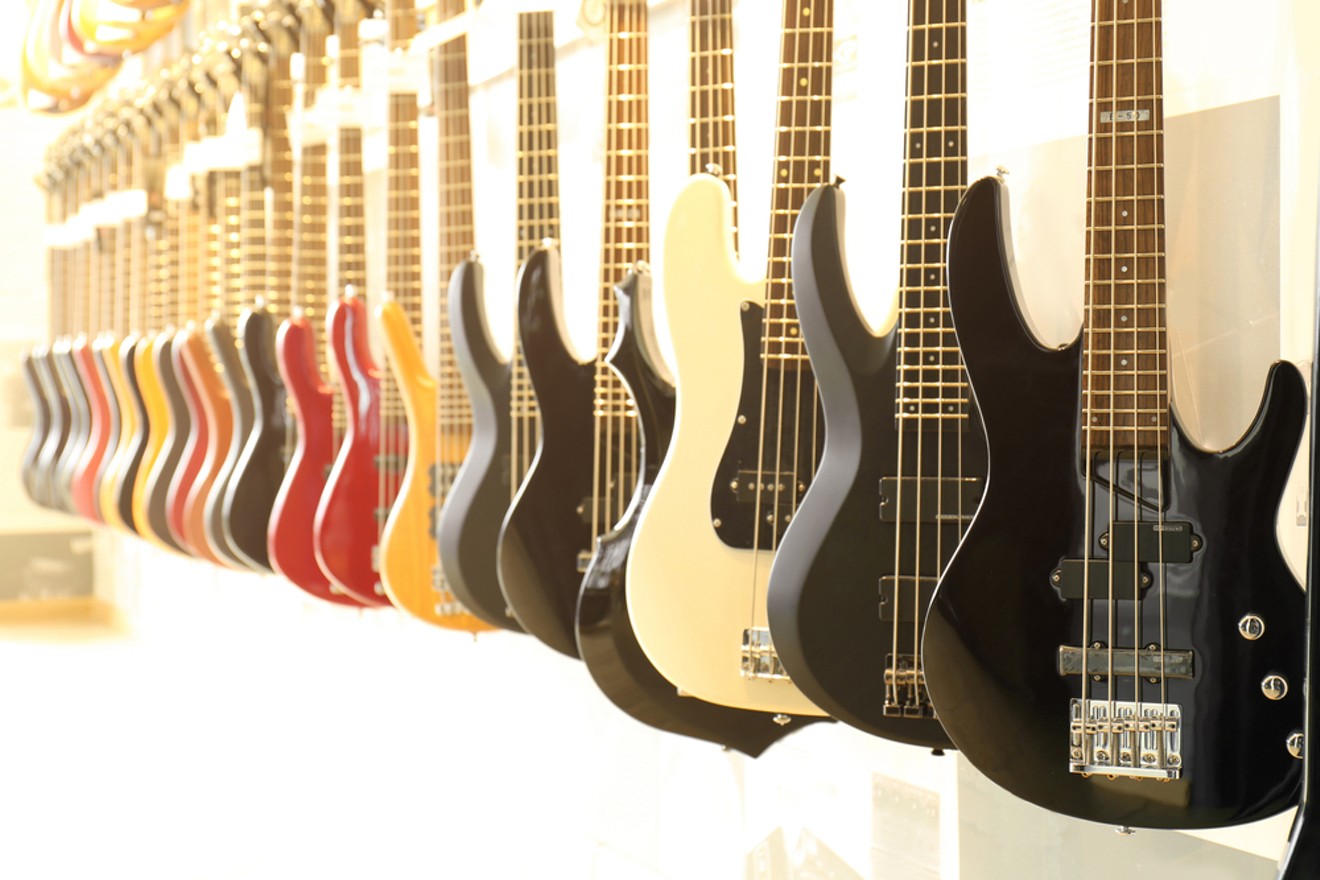 Is oversaturation hurting the electric guitar? Shutterstock/Africa Studio
The Washington Post called it the “slow death of the electric guitar” in its June 22 doomsday article, “Why My Guitar Gently Weeps.” The story opened with one of Eric Clapton’s old guitar dealers from Nashville, George Gruhn, who indicated that guitar makers were oversaturating a stagnant market before providing an age-old argument repeated by a lot of old-timers: Kids today just aren’t interested in guitar-driven music. They want electronic beats.

Former Beatle Sir Paul McCartney also reiterated this claim. “Now it’s more electronic music, and kids listen differently,” he told an interviewer. “They don’t have guitar heroes like you and I did.”

The Observer reached out to music industry locals to get their takes.

The Post’s article claims that oversaturation has caused a drop in annual guitar sales from 1.5 million to “just over a million” and paints a bleak picture of the instrument's future. Big guitar makers Fender and Gibson are in debt, and PRS Guitars is laying people off, it points out. Even Guitar Center is hurting and "fearful of publicity," with a $1.6 billion debt.


"My personal opinion is that live rock 'n' roll is going the way of jazz and blues. You can see it in the decline of attendance for original music." – metal guitarist Jim Crye

Sam Ash music store executive Richard Ash told the Post that that its customer base is aging. The Post ties this to the decline in Gibson’s sales, which it said was the result of oversaturation.

But the crux of the argument that the electric guitar is slowly dying is found in the statements by McCartney and Gruhn: the lack of new guitar gods to replace the old ones who are now showing their mortality as they approach their 60s, 70s and 80s. “What we need is guitar heroes,” Gruhn told the Post.

After the article was published, Gruhn told a Nashville TV station that he was surprised by the Post’s take. New and used guitars are both available in abundance, which wasn't the case a couple of decades ago, he said.

“I would say that the guitar market is under stress from oversaturation. But by no means is the market for the guitar simply dying,” he said.

Is electronic music really supplanting guitars? Or is oversaturation to blame? And where are all of the guitar heroes?

Some local music lovers argue that they can still be found filling arenas like American Airlines Center, playing in the low light of Poor David’s Pub or driving loved ones crazy while perfecting their guitar craft in garages or at music schools like the School of Rock, a music education program with 140 locations in eight countries.

Blues guitarist Lance Lopez disagrees with the Post’s article, he says, because he knows firsthand that people are willing to pay $250 for a ticket and fill 3,000- to 5,000-seat theaters to see guitar heroes like Joe Bonamassa or John Mayer slay the guitar. Lopez, 39, has also filled venues as part of the Supersonic Blues Machine, a supergroup that includes guitar hero collaborators like Billy Gibbons, Walter Trout, Warren Hayes, Robben Ford, Eric Gales and Chris Duarte.

“There are guitar heroes out there, but whether that crosses over to a mainstream audience is another matter,” he says.

Some of those heroes include young blues guitarists like 21-year-old Marcus King from The Marcus King Band. He ignites his guitar with a fiery brand of American roots music that he calls “soul-influenced psychedelic Southern rock.” King is the son of bluesman Marvin King, and The Philadelphia Inquirer said he was poised to become a “guitar superstar.”

Then there is Christone “Kingfish” Ingram, an 18-year-old guitar slinger from Mississippi whom Lopez says is “leading the way with the blues.” He’s been playing guitar since he was a child and found inspiration in the Delta blues of Robert Johnson, Elmore James, Muddy Waters and Lightnin’ Hopkins, as well as the electric blues of B.B. King, Albert King, Big Jack Johnson and Lucky Peterson — who, at 52 years old, is still slaying the stage.


And we can't mention Ingram without paying homage to 28-year-old guitarist Samantha Fish, who's shared the stage a time or two with him and racks up views in the triple and quadruple digits on YouTube. She's dropped four studio albums since hitting the scene in 2011, including her latest release, Chills & Fever.

Of course, blues isn’t the only genre with talented young guitarists paying homage to the legends. Dallas-based guitarist Kelley Juett is inspiring a new generation with his classic rock inspirations as part of the band Mothership. He’s touring in Europe and recently unveiled The Kelley Juett Galaxy guitar collection from Boult Guitars.

Lopez, who’s represented Gibson Custom at music trade shows like the National Association of Music Merchants, agrees that the electric guitar market is oversaturated but says the problem has more to do with guitar prices. Fender and a lot of big companies offer good guitars at prices that an average working musician simply can’t afford.

“The guys who can pay the money are either established musicians or doctors and lawyers who play them just for a hobby,” he says. “We need to have good guitars at a cheaper price for real musicians.”

The quality of a guitar also affects its lifespan. In his interview with WTVF-TV in Nashville, Gruhn said that a Fender or a Gibson can last several lifetimes. “With proper care, these things can outlast the great grandkids of the original purchasers,” he said.


"There are not many current bands that have a recognizable guitar hero, and a lot of guitar players don't have that recognizable fingerprint. When you heard Van Halen, you immediately knew it was them." – guitar teacher Jimmy Adcock

One difficulty in identifying up-and-coming guitar talent is that it's not always obvious where to look, other than YouTube. In the past, fans read guitar magazines or attended shows in their towns, but these days, older guitarists tend to hog the covers. North Texas musicians are also finding that attendance is down for rock bands that play original music, particularly in the metal genre, compared with what it was in the '80s and '90s.

“My personal opinion is that live rock ‘n’ roll is going the way of jazz and blues,” says local metal guitarist Jim Crye, formerly of Volume Dealer. “You can see it in the decline in attendance [for original music].”

Crye spends his days as a high school teacher and his nights and weekends as a guitar slinger for hire. He’s been playing in the local metal scene since the late ’80s and considers himself part of the last big wave of metal bands to hit the area after Pantera and Rigor Mortis signed record label deals.

In recent years, he’s been playing with tribute bands, which he says draw bigger crowds. A recent show he played at House of Blues with the Ozzy Osbourne tribute band Blizzard of Ozz had 685 attendees. He typically observes a few dozen people at shows for local bands writing their own tunes.

“It has been musically rewarding [to play in a tribute band], but it sucks because you have to sell your soul to play DIO, Randy Rhodes and Pantera because you’re regurgitating the stuff,” Crye says. “Guys like me, our dream isn’t to get signed as an original musician but as a hired gun who can play your band’s stuff."

“But we do need a new guitar hero to spark the electric guitar sales,” he adds.

Jimmy Adcock has been teaching guitar at Arlington School of Music since 2001, and he’s noticed that a lot of his young guitar students mention Eddie Van Halen, Randy Rhoads and Zakk Wylde as their inspirations — but no one from this decade or the last. The rest of his students, he says, are inspired by songs rather than a desire to emulate one person.

“There are not many current bands that have a recognizable guitar hero,” he says, “and lot of guitar players don’t have that recognizable fingerprint. When you heard Van Halen, you immediately knew it was them. They are missing that signature sound ... but I think the electric guitar is still a popular instrument."