Yungblud Nearly Gets Arrested After Promotion Stunt in SMU's Library 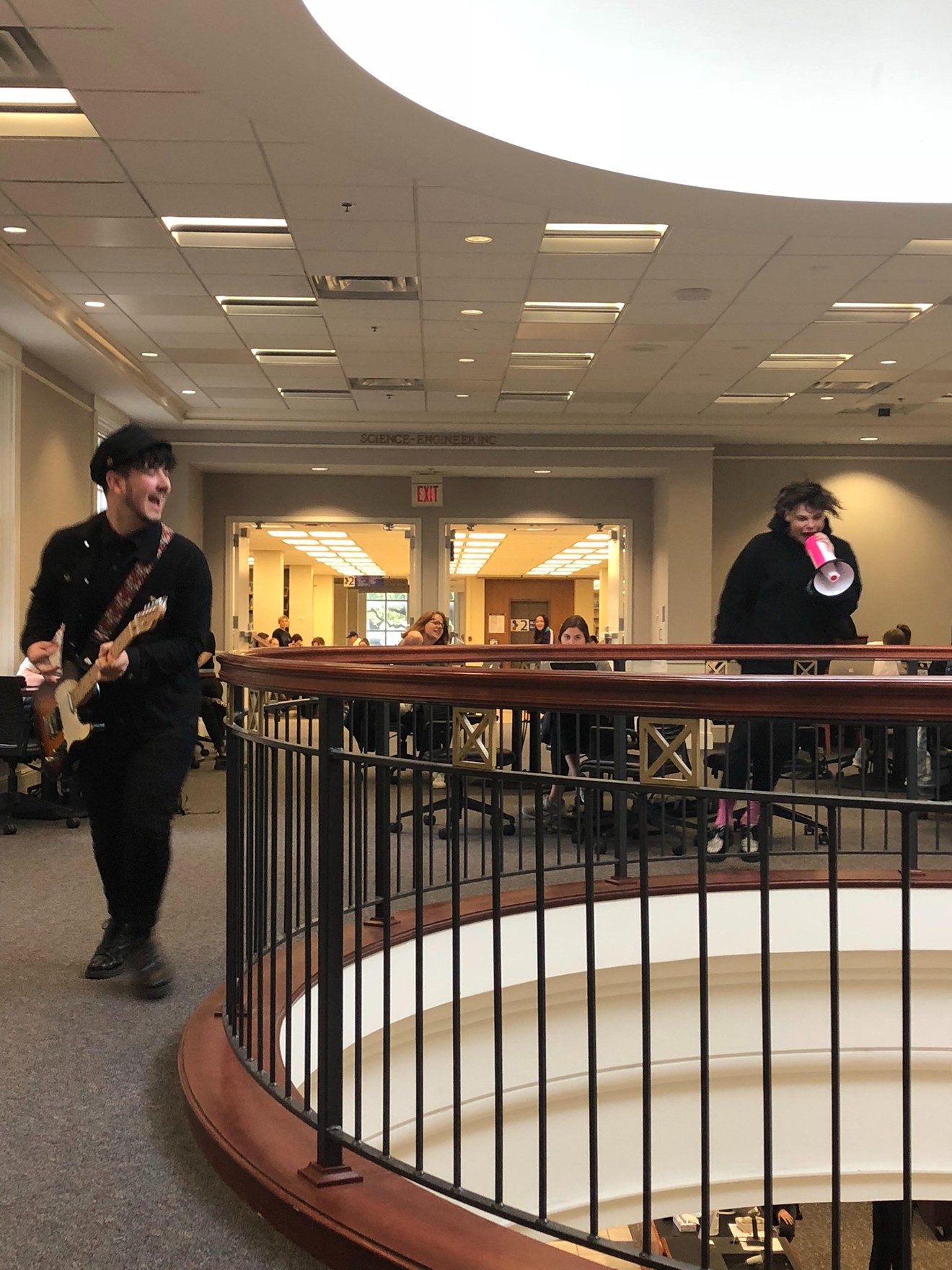 Yungblud annoying everyone. Jacob Vaughn
Southern Methodist University's Fondren Library was moderately quiet Wednesday afternoon as students mingled and worked on group projects near the building's Starbucks. Further inside, the atmosphere was what one might expect in a library — silent. Then Dominic Harrison, aka Yungblud, crashed students' study space with his three-piece band.

Around 2:20 p.m. Yungblud, his band and a cameraman walked into the library wearing all black clothes, as if they were ready to pull off a heist.

“Just keep walking,” Harrison said as the group passed by tables of students.

Josie Goson, Dallas college and lifestyle marketing representative for Universal Music Group, thought this not-so-punk publicity stunt would be a good way to promote the artist’s 8:30 p.m. show at the Granada Theater that night. But some students, library staff and campus police weren’t as enthusiastic about the idea.

The performance included one snare drum and an electric guitar hooked up to a mini-amp and a megaphone. Once the group made its way deeper into the library, Harrison stood on top of a desk, and the band started playing "I Love You, Will You Marry Me" while apparently trying to be as obnoxious as possible. The most audible noises were Harrison’s vocals, the pounding of the snare drum and the simultaneous siren sound-effect that Harrison switched on and off throughout the performance.

As the performance came to a close, one student told his friend that it was the worst thing he had ever heard. The idea behind this cry for attention was to see how long the band could play before getting kicked out of the building. But once the band was done with the song, it packed up and left.

“Follow me on Instagram,” Harrison said. “Rock 'n' roll’s not dead,” he yelled as they left the building.

The group began running to its black van parked near the corner of University Drive and Robert S. Hyer Lane. But librarians followed the musicians outside to point campus police in the direction of their escape car.

“They’re over there,” a librarian yelled.

By the time they all piled into the van, cops had rounded the corner, flipped on their lights and sirens, and stopped the band from driving away. Two cops approached the vehicle and began questioning the group.

“So, what’s going on, gentlemen?” one officer asked.

Harrison told the officer they were doing promo for their show that night and even offered him some tickets. Eventually, the officers asked everyone to step out of the van. The three performers, the cameraman, Goson and the driver got out of the vehicle and gave their identification to the officers.

“First of all, I love the [pink] socks,” an officer said as Harrison exited the van.

Did Yungblud's pink socks save him from an arrest?
Jacob Vaughn
Everyone in the van was told to sit on the curb as the officers ran their information. One the group that he could have cited everyone for disturbing the peace and potentially evading arrest.

The band admitted to the officer that what it had done was stupid. By this time, a handful of people who witnessed the performance were standing by, filming the interaction. The band got off with no citations and even received some free promotion from campus police.

“Their show’s at 8:30 [p.m.] at the Granada Theater tonight, in case anyone was wondering,” the officer yelled to bystanders before the van drove away.

While this stunt garnered the group some attention at SMU and on social media, it begs the question: Is this what bands have to do to gain musical success? Instead of spending the time putting up fliers, the musicians played a subpar performance in a college library, risking citations or arrests.