Ben Sandifer often takes trips to the Great Trinity Forest in South Dallas, where ash trees are plentiful. Jacob Vaughn
Until the early 2000s, Americans largely didn’t have to worry about the emerald ash borer, a destructive non-native wood-boring pest that seeks out ash trees. But the beetle, native to Asia, showed up in southeast Michigan in 2002.

Left alone, the beetle can devastate populations of ash trees within a three-year period. Now, the city says its forestry task force has learned the beetle may be in Dallas County. It’ll take up to two weeks to confirm with the Texas A&M Forest Service, but Dallas is working to finish an emerald ash borer action plan “to address and mitigate any impact” the beetle could cause if it's found in the city limits.

Since it may be in the county, city staff members are monitoring traps in the area. “Ash trees with low population densities of [emerald ash borer] often have few or no external symptoms of infestation,” according to the city’s proposed action plan. “[Emerald ash borer] is a significant threat to urban, suburban, and rural forests as it kills both stressed and healthy ash trees.” 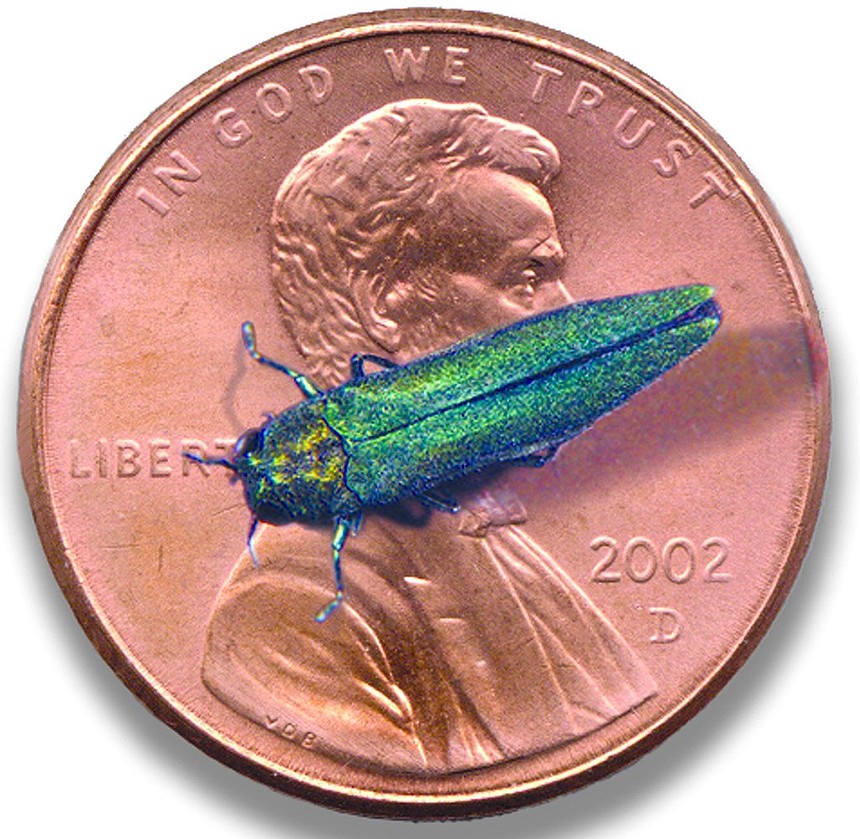 The emerald ash borer is small but lethal to ash trees.
Howard Russell, Michigan State University, Bugwood.org, CC BY 3.0 US, via Wikimedia Commons
One of the action plan's goals is to decrease the beetle’s effects on the overall forest canopy in Dallas by increasing the populations of other native trees and reducing the number of ash trees. Meanwhile, the city says it wants to preserve as many of the ash trees as it can. This is because they can benefit people, wildlife and the environment. For example, the ash tree acts as a habitat for bats, woodpeckers, owls with nesting holes and several other nesting birds, and supplies seeds for a multitude of other species.

Their shed leaves retain more nutrients and recycle more rapidly than most other tree species.

“Complete removal or loss of the ash tree population has the potential for an extinction cascade,” the city’s action plan adds. “Studies indicate that there are 98 species of ash-dependent specialist invertebrate herbivores, including nine species of hawk moth.”

“It will be devastating when it gets to Dallas." – Ben Sandifer, environmentalist

Part of the conservation effort could involve treatments for certain trees.

Texas has been on the lookout for the emerald ash borer since it cropped up in Arkansas and Louisiana in 2014 and 2015 respectively. Then, it was found in a single trap near Caddo Lake in Harrison County in 2016, according to the Texas chapter of the International Society of Arboriculture.

A couple of years later, infested ash trees were found in Tarrant County. This led the state of Texas to impose a quarantine on all brush and firewood in the county. Residents could either leave the brush and firewood on their porch to be picked up by crews in the county or take it to a place where they could dispose of it for a fee. The city’s action plan says a similar quarantine could go into effect if the beetle is found in Dallas, and state authorities say it’s necessary.

The beetle’s arrival within county or city limits seems inevitable. But as talks of an action plan for when that day comes started heating up last year, some worried the response may be too hasty. According to a 2015 report by the Texas Trees Foundation, 13.1 percent of all trees in the city are ash, an estimated population of nearly 2 million ash trees.

“It will be devastating when it gets to Dallas,” Ben Sandifer, a Dallas resident, told the Observer. “The ash borer will not only kill off nearly all of our ash trees. It will likely wipe out many insect species as a host for eggs and larva. The Great Trinity Forest has many ash trees. Their loss will impact it quite a bit.”

Sandifer, who's known as a watchdog of the Great Trinity Forest, said while the beetle could decimate the local tree population, he worries removing the trees without a solid plan could have an even greater negative effect on other wildlife.

Over the last couple of years, Sandifer said, there have been various discussions about how to address the emerald ash borer when it inevitably lands in Dallas. “Some have floated the idea about logging the Great Trinity Forest for ash trees, essentially clear-cutting large sections of public land and building a sawmill on site,” Sandifer said. “Another plan was to clear ash trees and replant other species.” Another idea was just to let nature take its course, besides in areas where the public would be affected.

“I am against logging in the Great Trinity Forest,” Sandifer said. “It will do more harm than good.”

Sandifer says Dallas needs to do an inventory of ash trees on city property and prioritize mitigating in areas where there’s the most public threat. For example, areas where there’s a lot of foot traffic, like parks, playgrounds and areas around libraries, should be a priority.

“So many neighborhoods, especially areas in Dallas north of Love Field, are predominately ash trees,” Sandifer said. “There needs to be an aggressive public awareness campaign that targets these areas.
KEEP THE DALLAS OBSERVER FREE... Since we started the Dallas Observer, it has been defined as the free, independent voice of Dallas, and we'd like to keep it that way. With local media under siege, it's more important than ever for us to rally support behind funding our local journalism. You can help by participating in our "I Support" program, allowing us to keep offering readers access to our incisive coverage of local news, food and culture with no paywalls.
Make a one-time donation today for as little as $1.