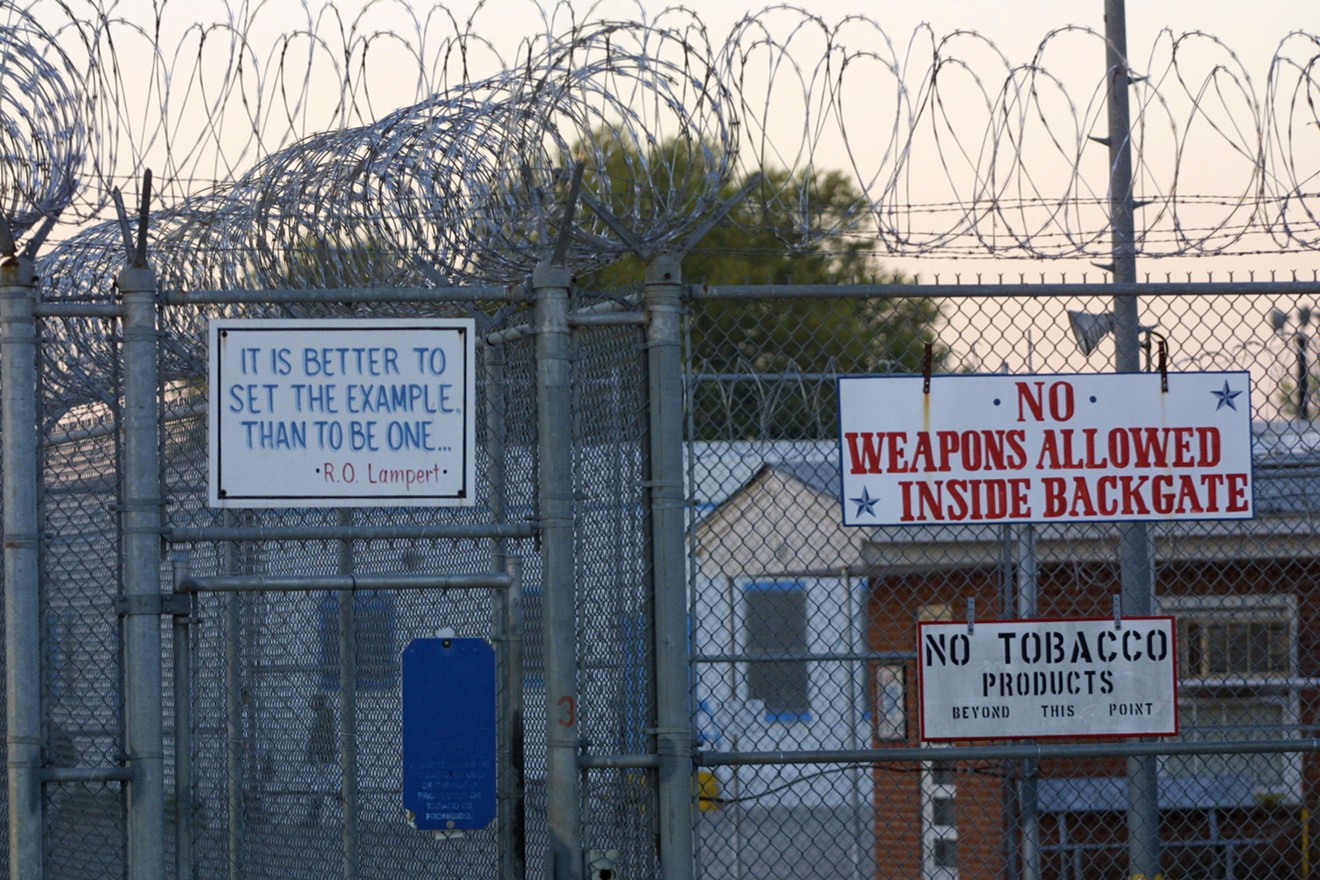 The vast majority of Texas prisons do not have air conditioning, making summer heat even tougher to endure for many inmates. Pictured is the minimum-security Carol Vance Unit near Houston. Joe Raedle/Newsmakers (Getty)
UPDATE, Dec. 16: A spokesman for the Texas Department of Criminal Justice responded to our request for comment for this story. Those comments have been included in the article.

All too often, Dr. Amite Dominick receives letters containing some variation of the sentence, “I don’t think I’m going to make it.”

Dominick, the founder and director of Texas Prisons Community Advocates, is in frequent contact with incarcerated people, their families and beleaguered corrections officers. Each of these groups has its distinct sources of despair, but there is one topic that frequently bubbles to the top of the list of grievances, particularly in the summer months: the heat.

Only 28 of the 107 prisons in Texas are fully air conditioned. Despite years-long attempts from advocates like Dominick, incarcerated people still endure scorching summers in units that regularly reach 110 degrees and, in at least one case, topped 149 degrees. The Texas House recently passed a measure to install air conditioning in all its prisons by 2029, but lawmakers didn’t provide the money, and the Senate never voted on the bill.

“The letters I get are full of so much pain,” Dominick says, “because they were written by people who were literally being baked alive.”

Now, a new research study adds clarity and specifics to that pain.

The study — a joint effort by Boston University, Brown University, Harvard University and Dominick’s organization — combined federal data on prison mortality in Texas with temperature data from NASA. It also focused on state prisons that do not have air conditioning. Heat mitigation practices differ by facility, but in most cases, incarcerated people must try to cool off with damp towels, “bird baths” in lukewarm sink water and a series of fans stationed throughout the unit. If they have the means to do so, some may buy a handheld fan.

Researchers determined that approximately 13% of mortality in warm months between 2001 and 2019 may be attributable to extreme heat. In other words, the potent combo of soaring temps and no air conditioning may have led to 271 deaths in Texas prisons. For comparison, around 0.4% of deaths in the non-incarcerated population are heat-related.

Notably, the study did not include this past summer (one of the hottest on record), nor did it include three summers in which COVID-19 has ravaged prisons.

“I’m really concerned if we were to run that study again this past year, that those numbers would dramatically increase,” Dominick told the Observer. “In July alone, we had 51 deaths associated with cardiac symptoms, and I strongly suspect heat was a factor.”


“The letters I get are full of so much pain because they were written by people who were literally being baked alive.” – Amite Dominick, Texas Prisons Community Advocates

Dominick also says the Texas Department of Criminal Justice has historically downplayed the impact of heat in its facilities and the number of deaths associated with high temps. In fact, at a July hearing before the Texas House of Representatives’ Appropriations Committee, the department’s executive director claimed that there have been no heat-related deaths since 2012. (In 2018, a coroner ruled an incarcerated man had died by heat stroke, but Texas prison officials contest that finding.)

In response to questions from the Observer, the department said, in part, "The agency recognizes that some inmates are potentially at a heightened risk of heat-related illnesses because of their age, health conditions, or medications. These individuals are identified through an automated heat sensitivity score that uses information from the inmate’s electronic health record. Individuals who have a heat sensitivity score receive priority placement in a housing area that is air-conditioned."

A spokesperson also pointed to an ongoing initiative to add "cooled beds" to their facility, and they said there were "13 inmates who required medical care beyond first aid for heat-related injuries" in 2022, but none were fatal.

However, the department appears to spend more resources combatting lawsuits than it does pursuing the installation of AC. In one infamous case, officials spent multiple years and $7 million fighting legal efforts to cool the Wallace Pack Unit, which houses elderly people. According to the Texas Tribune, the unit’s new air conditioning cost the state about $4 million.

The constant haggling over finances is a particular source of irritation for Ella (not her real name), whose husband has been incarcerated in a series of Texas prisons going on five years. The Observer spoke to her and her son, and because of the stigma attached to incarceration, the two asked the paper to use pseudonyms.

“The good people of Texas don’t give a rat’s behind,” Ella says. “Even friends of mine, they don’t care. They’re good Christian people. They’re in church every Sunday; some of them are pastors. In this situation, mercy is lost on them.”

But it’s not lost on the researchers behind this new study.

Julianne Skarha, an environmental health scholar at Brown, was still mulling the exact topic of her dissertation when she visited a prison in Cranston, Rhode Island, roughly five years ago. She was initially planning to investigate the effects of air pollution in prisons; then she visited the part of the facility where incarcerated people make license plates.

“I couldn’t get over how hot it was,” she says. “I talked to some of the guys, and they said, ‘Oh it gets way worse in summer.’”

Skarha was also disturbed by the plight of men enduring solitary confinement.

“It’s awful to comprehend, yet people are living with that reality every day,” she says. "They’re dealing with high suicide rates and horrid conditions, and on top of all that, you have the heat."

Skarha and Dominick, who collaborated on the study, are hoping the research will create more awareness of the severe temperatures harming the state’s prison population and staff. At the same time, Dominick has plenty of reasons to be discouraged.

The advocate says she discussed the matter with Texas lawmakers at a committee hearing this past summer, and while some appeared moved by the stories Dominick shared, none expressed an immediate desire to address the problem. It’s simply a matter of political will, she noted, and for those incarcerated in the state, there is often none.

For example, experts say the number of extremely hot days will increase exponentially by the middle of the century. In Texas, that could mean as many as 50 consecutive days where the heat index surpasses 105 degrees Fahrenheit.

For people like Ella’s son Alan, who has already watched his father experience five blistering summers behind bars, that means more worries, more uncertainty and more painful letters to people like Dominick. When faced with inaction from the state, Alan says, his dad has no option but to tough out the heat each year.

“Imagine you’re in a hot sauna, and someone locks the door on you,” Alan says. “What would you do?”
KEEP THE DALLAS OBSERVER FREE... Since we started the Dallas Observer, it has been defined as the free, independent voice of Dallas, and we'd like to keep it that way. With local media under siege, it's more important than ever for us to rally support behind funding our local journalism. You can help by participating in our "I Support" program, allowing us to keep offering readers access to our incisive coverage of local news, food and culture with no paywalls.
Make a one-time donation today for as little as $1.