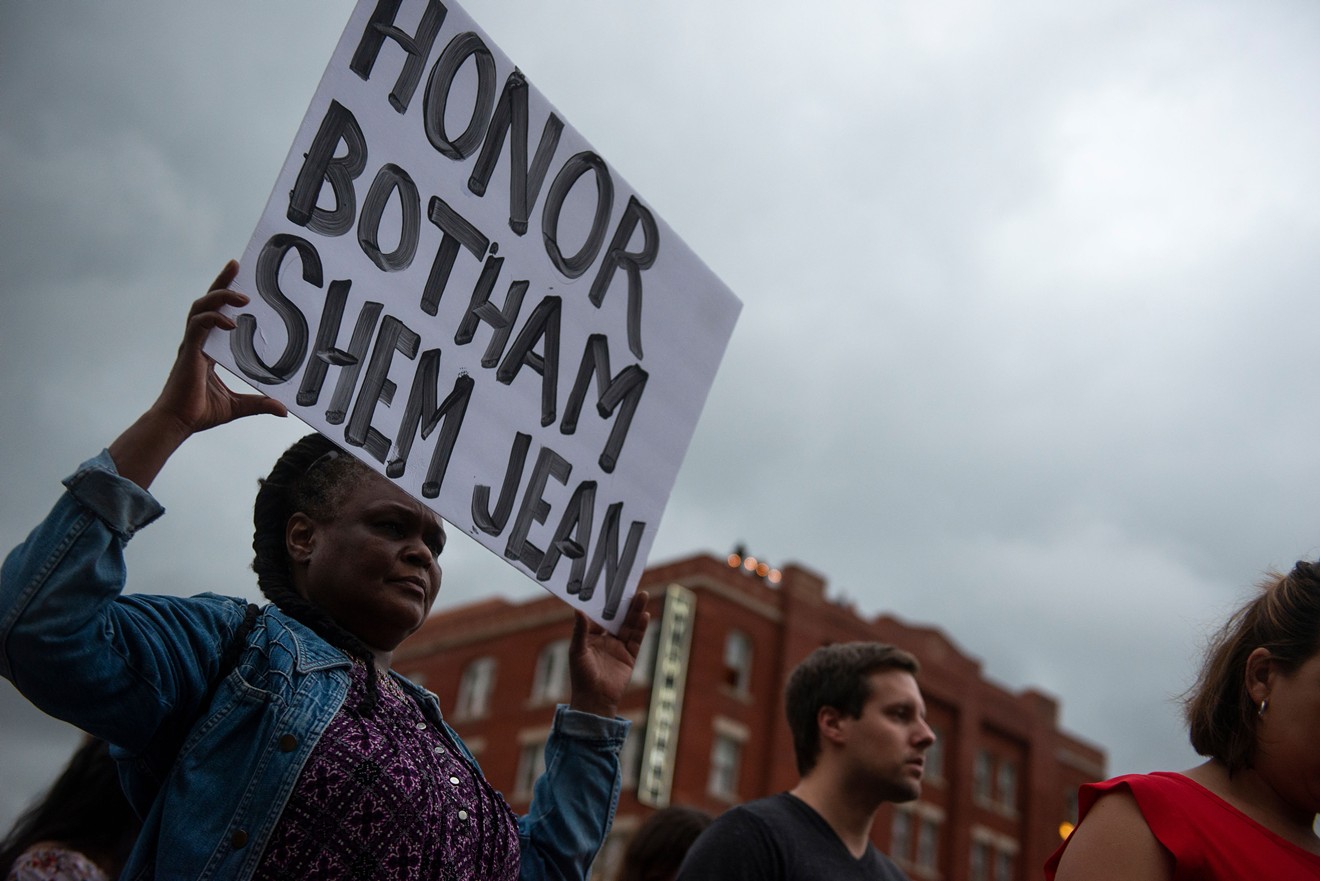 At a lunchtime press conference, organizers demanded that the city beef up its review board following the death of Botham Jean, the man shot and killed by an off-duty Dallas Police Department officer last Thursday night. The time has come, they said, for public policy rather than the words and condolences offered by city leaders in the week that has followed Jean's death. Dallas' current police review board has no real power, serving only in an advisory capacity to the police department and Dallas City Council.

"It's been almost half-a-century since an officer in the city of Dallas was convicted of the brutalization and murder of a Dallas citizen," the Rev. Michael Waters said, referencing the death of Santos Rodriguez in 1973. "I know that during the course of more than 50 years, we cannot say certainly that, in each one of these cases, the officer was not guilty of the crime. It is time. It is important for this review board to be put in place, not just for today, but for the promise of tomorrow."

"There is this aura or this feeling that indicates that we like protesting, that we like having to drive the community to the streets, that we like constantly having to do this, over and over and over again," Suleiman said. "Had there been transparency and an effective mechanism of accountability, then, as community leaders, we would be able to face the community and say that we were working on something, but every single time this happens, we're locked out. We're left with a whole lot of ambiguity, which only increases our mistrust in a system that continues to yield dead black men, women and children in our streets and, now, in our homes."

"You continue to make development in these neighborhoods and you say that it doesn't matter," Alexander said. "Those people that are in those neighborhoods, when they get into an encounter with policing, we don't want them to be the next hashtag."

After each of Alexander's mini-speeches, he got a round of applause from the audience. After the second ovation, Dallas Mayor Mike Rawlings, who'd warned the crowd once about council rules, recessed the meeting.

Chants of "no justice, no peace" serenaded the mayor as he walked out of the council chambers. Several members of the council — Mark Clayton, Jennifer Gates, Rickey Callahan, Scott Griggs, Adam Medrano, Sandy Greyson, Philip Kingston, Adam McGough, Tennell Atkins and Omar Narvaez — remained in the chamber to listen to protesters speak. Waters reiterated his call for a review board and fiercely denounced the city's still having failed to remove the Confederate memorial that stands between Dallas City Hall and the convention center.


"I appeal to each and every one of you council persons today: Do not delay justice!" — Michael Waters

"I appeal to each and every one of you council persons today: Do not delay justice!" Waters said. "Do what is right for the city of Dallas. Bring down the Confederate monuments, approve the citizens' review board and make sure that every person in the city of Dallas has a means of work, a means of education, a means of thriving and a means of living."

About 40 minutes after recessing the meeting, the mayor returned to council chambers to call it back to order. Shortly afterward, he handed over running the meeting to Mayor Pro Tem Casey Thomas to meet with Alexander one-on-one.
After the meeting, Alexander spoke with the council again and demanded that it be accountable to the Dallas residents, rather than the longstanding Dallas Citizens Council. The Citizens Council is often seen as a gatekeeper for city politics, contributing campaign cash and business muscle to its preferred candidates.

"We're tired of coming here. That's why the anger is here. We need for you guys to stand up," he told the council. "I am tired of the Dallas Citizens Council controlling this council. I am tired of their voices being louder than ours."
KEEP THE DALLAS OBSERVER FREE... Since we started the Dallas Observer, it has been defined as the free, independent voice of Dallas, and we'd like to keep it that way. With local media under siege, it's more important than ever for us to rally support behind funding our local journalism. You can help by participating in our "I Support" program, allowing us to keep offering readers access to our incisive coverage of local news, food and culture with no paywalls.
Make a one-time donation today for as little as $1.