After Deadly Crane Crash, Apartment Residents Pick Up the Pieces A crane collapsed and landed on the Elan City Lights apartment complex east of downtown Dallas on Sunday afternoon, killing one woman and injuring at least a half-dozen more people. Silas Allen
Residents of a Bryan Place apartment complex where a crane fell over the weekend were able to return to their homes to gather a few things before heading back to the hotel rooms where they're likely to be living for at least a few weeks.

Shortly before 2 p.m. Sunday, a strong thunderstorm toppled the crane, which was set up at a nearby construction site, into a wall at the Elan City Lights apartment complex at the corner of Live Oak Street and North Good-Latimer Expressway. The crash left a 29-year-old woman dead and sent five more to the hospital, according to Dallas Fire-Rescue.

Kiersten Symone Smith, 29, was taken to a hospital after the crash, where she was pronounced dead at 2:37 p.m., according to the Dallas County Medical Examiner's Office.

The fire department is working with the Occupational Safety and Health Administration and Biggie Crane Co. to determine how to remove the crane. Once removal work begins, the process is expected to take about two days, Evans said.

In a Facebook post, Dallas photographer Alec Corona, a resident of the apartment complex, said he saw a couple stranded on their balcony and a bloodied girl screaming out of a window in the moments after the accident.

Although the crash damaged only a few units, the five-story apartment complex's management, Greystar Properties, shut down the entire facility, moved residents into hotels and gave them a per diem allowance for food.

On Monday, staffers from the property management company met with residents at the nearby Latino Cultural Center to schedule times for residents to go back into their apartments, escorted by police and firefighters, and gather some belongings. 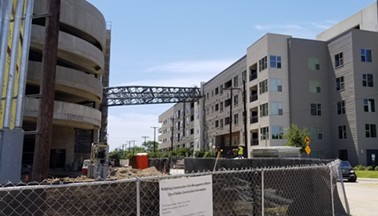 Sunday's crane accident at Elan City Lights apartments also caused extensive damage to the parking garage and many of the residents' vehicles. The five-story complex has been vacated indefinitely for repairs.
Silas Allen
Shortly after noon Monday, Kasia Uwnal, 31, was leaving the cultural center after meeting with Greystar staff. She hadn't been allowed back into her apartment since the crash but said her unit wasn't one of the ones the crane smashed into. Still, the crash was close enough that her apartment may have sustained structural damage, she said.

On Monday, Uwnal got more information about the hotel where she'll be living until the apartment complex reopens. But Greystar staff couldn't give her an estimate of how long she'll be displaced, and some of the information they did give her was conflicting, she said. Some staffers told her to take only a few small personal items from her apartment. Others told her to get as much as she could carry.

Uwnal said she had lived in the apartment for a couple of weeks before the crash. A native of Poland, she moved down from Oklahoma City and into Elan City Lights in late May.

"Lucky me," she said.
KEEP THE DALLAS OBSERVER FREE... Since we started the Dallas Observer, it has been defined as the free, independent voice of Dallas, and we'd like to keep it that way. With local media under siege, it's more important than ever for us to rally support behind funding our local journalism. You can help by participating in our "I Support" program, allowing us to keep offering readers access to our incisive coverage of local news, food and culture with no paywalls.
Make a one-time donation today for as little as $1.