NFL's New Anthem Rules Don't Change Anything for the Cowboys 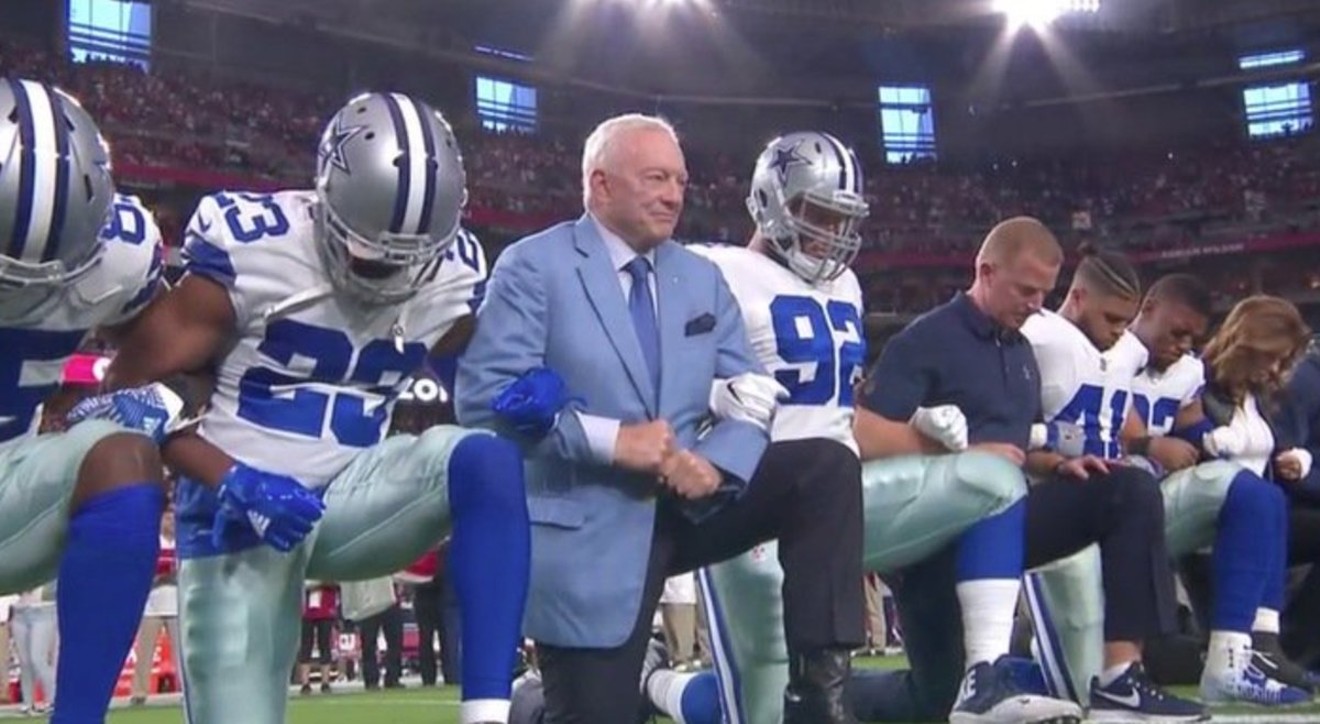 Jerry Jones knelt with his players before the Dallas Cowboys game against the Arizona Cardinals in September. Dallas Cowboys via Twitter
The Cowboys' tumultuous 2017 season had a little of everything.

It had two three-game winning streaks and one season-killing, three game losing streak. It had defensive end DeMarcus Lawrence becoming the All-Pro his backers always thought he could be and wide receiver Dez Bryant taking the fall off the performance cliff his critics said was inevitable. It had star running back Ezekiel Elliott fighting a high-profile legal battle with the league, seeking to dodge a suspension based on domestic violence allegations, and star quarterback Dak Prescott trying to prove to everyone that he wasn't just a one-season wonder.

The one thing the 2017 Cowboys campaign didn't have, remarkably, was a major controversy over player protests of the national anthem. The NFL's ownership cabal did its best Wednesday to make sure neither the Cowboys nor any another team will have to deal with one in 2018.

League owners agreed Wednesday that all team personnel on the field when the national anthem is played will stand for the song. Any player wishing not to participate — or coach, but who are we kidding, NFL coaches are some of the most authority-loving galoots on Earth —  can hang out in the locker room. If a player protests during the anthem on the field, his team will get fined. The team will then have the option to fine the protesting employee.

Cowboys players, in Frisco on Wednesday for an off-season organized team activity, brushed off the new restrictions on their ability to express themselves in the workplace.

"I'm glad they came to an agreement in some form or another," Prescott said, according to reporters at The Star. "I'll be out there standing."

The quarterback said he couldn't speak for his teammates about whether anyone would remain in the locker room but made it pretty clear what direction he thought things would go.

"I'm pretty sure we all know kind of what Jerry said, his statement last year," Prescott said. "I don't see that changing, so who knows?"

Last year, when Cowboys defensive linemen David Irving and Damontre Moore raised their fists after the national anthem played before the Cowboys' 35-31 loss to the Packers in Arlington, Jones became the first NFL owner to speak out on the anthem controversy, making it clear that any Cowboys player choosing to protest would not be allowed to play.

Cowboys players took Jones' message to heart. No player sat or kneeled for the anthem during the entirety of the 2017 season.


"It's still a business at the end of the day, so it is what it is." — DeMarcus Lawrence

Jones, who joined his players to take a knee a couple of seconds after the national anthem finished before the Cowboys' week three game in Arizona, threaded the needle. He looked, in that moment, like he was with his players, but he also made it clear that standing for the anthem was a business decision, something Lawrence echoed Wednesday.

"I feel like I'm not an owner yet, so I can't make none of those rules. You've just got to abide by them. It's still a business at the end of the day, so it is what it is," he said.
KEEP THE DALLAS OBSERVER FREE... Since we started the Dallas Observer, it has been defined as the free, independent voice of Dallas, and we'd like to keep it that way. With local media under siege, it's more important than ever for us to rally support behind funding our local journalism. You can help by participating in our "I Support" program, allowing us to keep offering readers access to our incisive coverage of local news, food and culture with no paywalls.
Make a one-time donation today for as little as $1.