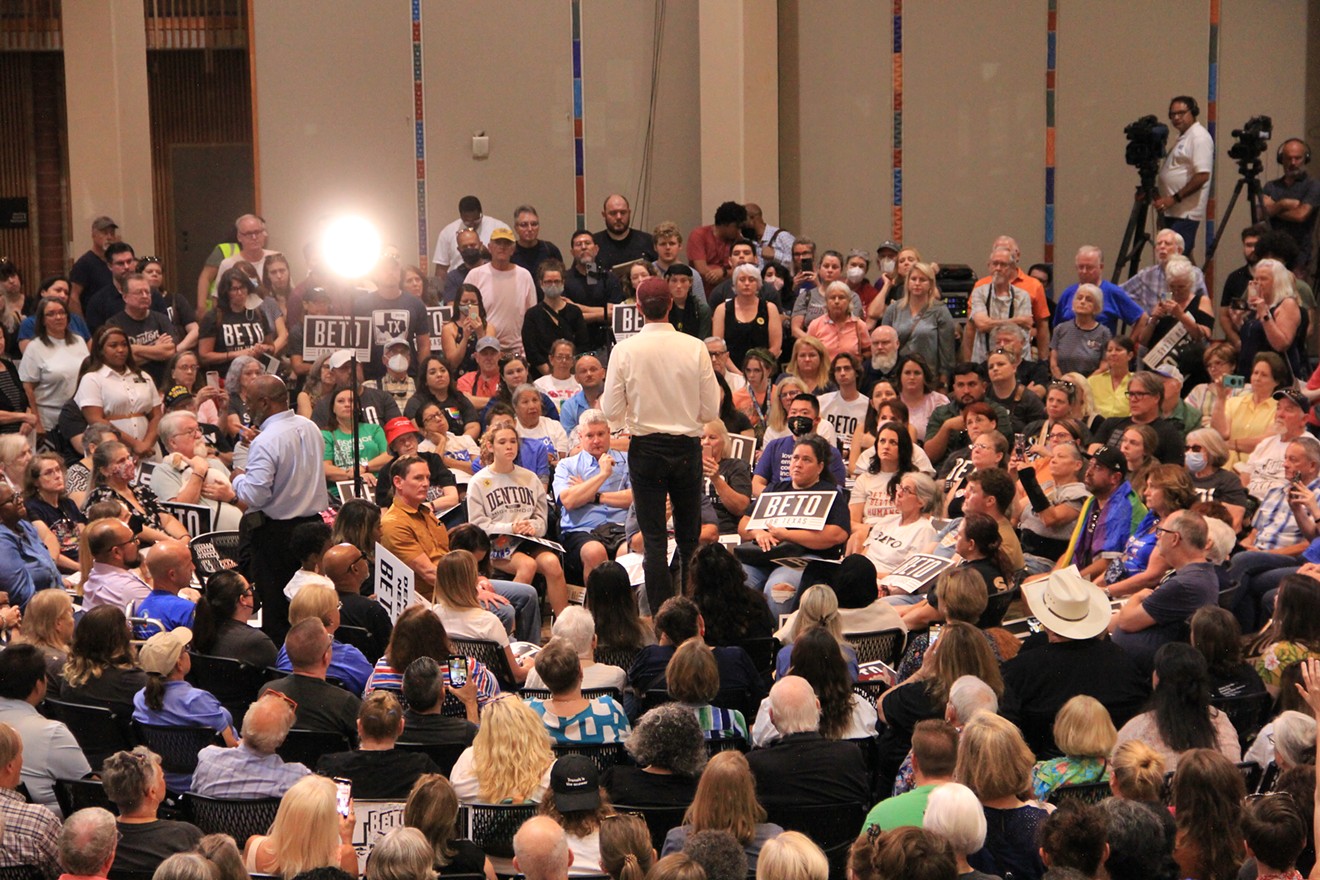 On Wednesday, Beto O'Rourke held a campaign event in Denton. Kate Pezzulli
When Beto O'Rourke came to Denton last year, a so-called Trump train rolled through and tried to crash the rally. But when the Democratic gubernatorial challenger returned to town Wednesday, the crowd that filled the Denton Civic Center was all supporters.

The Denton town hall came on the final week of O'Rourke's 49-day statewide tour, which includes more than 70 stops across Texas.

Addressing the crowd, O'Rourke took aim at Gov. Greg Abbott over Texas' recently enacted abortion ban, the state power grid's failure during the deadly February 2021 freeze and the governor's busing of migrants to cities around the country.

"If you want to come to this country, you must follow our laws," O'Rourke said of migrants, adding that he would implement laws that help facilitate "a safe, legal, orderly path" to coming to the U.S.

O'Rourke also blasted Abbott over Texas Republicans' laws to restrict voting and the governor's response to the mass shooting in Uvalde that killed 21 people, including 19 children, in late May.

"It has been one day and 15 weeks since 19 children and their two teachers were slaughtered in the very classrooms that they attended day in, day out," O'Rourke said.

The rally comes as Democrats and Republicans ramp up media pushes and attack ads.

On Monday, Abbott released a 30-second ad accusing O'Rourke of wanting to defund the police, a charge O'Rourke has denied. "Beto O'Rourke's answer is to defund and dismantle the police," the governor said in the ad. "He wants to punish the police, not the criminals."

But in Denton Wednesday, O'Rourke painted a different picture. "When it comes to law and order, when it comes to fully funding law enforcement, when it comes to preventing crimes, Greg Abbott has failed the people of Texas and he's killing the women among us right now," he told the crowd, referring in part to the state's abortion ban.

Among those who came out to show their support for O'Rourke, several said they were motivated by the Uvalde shooting, reproductive rights and political accountability, among other reasons.

O'Rourke drew a large crowd in Denton Wednesday.
Kate Pezzulli
Dee Fox said that the state needs a tremendous change from a governor who really only cares about power. “When you send people off in a bus for a political statement … I just can’t handle it,” Fox said of Abbott's migrant buses. “I just think that this is really a time of looking at morality, integrity and it’s not in Greg Abbott.”

Another attendee, Richard Bulaoro, said that restoring abortion access and fixing the power grid are both important.

Sara Beth Hooper, who volunteered at the O'Rourke event Wednesday, said that the campaign still needs block walkers and people to host events in Denton. “We need more young people like students, that kind of thing, coming up,” said Hooper. “They can sign up to do a block walk or to even host one.”

She also mentioned an app called the REACH app, which allows a person to connect with others in a campaign. She said that with the Reach app and through the Two Million Texans Project, a person can import their contacts to connect with people they already know.

"So there’s … a push to try to get people to sign up for the app and import their contacts so that we can all be reaching out and just reminding our people to vote, since so many didn’t," Hooper said. "That’s the hard thing."

In late August, The Dallas Morning News and the University of Texas at Tyler published a poll that found Abbott still maintained a seven-point lead over O'Rourke.

Last month, Abbott appeared at the King's Academy in Dallas for an education roundtable, where he defended measures implemented in the wake of Uvalde. “Schools are stepping up and doing those school checks," he said. "We know that schools and administrators and teachers want to keep their children safe."

At the Denton rally, O'Rourke also criticized Abbott over the August 2019 mass shooting at an El Paso Walmart, which left 23 people dead. The Democrat pointed out that Abbott has increasingly described the border crisis as an "invasion," language similar to that used by the El Paso shooter in his manifesto.

O'Rourke described the governor as a "demagogue" whose rhetoric on migration amounted to "fearmongering" and "vilifying and demonizing immigrants at our border."
KEEP THE DALLAS OBSERVER FREE... Since we started the Dallas Observer, it has been defined as the free, independent voice of Dallas, and we'd like to keep it that way. With local media under siege, it's more important than ever for us to rally support behind funding our local journalism. You can help by participating in our "I Support" program, allowing us to keep offering readers access to our incisive coverage of local news, food and culture with no paywalls.
Make a one-time donation today for as little as $1.