Stephanie Wade and her daughter, Keeley, broke down as they recounted the shooting at Timberview High Schooll Jacob Vaughn
Early Wednesday afternoon, buses carried students down Debbie Lane toward the Mansfield ISD Performing Arts Center in Arlington. Parents rushed to pick up their children, who had just been evacuated from Timberview High School following a shooting that injured at least four people.

Standing alongside her mother, Stephanie, ninth-grader Keeley Wade recounted the chaos. As the shooting took place, she said, she kept telling herself, "God's with us, and he's here to protect us."

Breaking down in tears, Keeley hugged her mother. Reporters crowded around them, holding up microphones and jostling for a spot.

When the news broke that a shooter was inside her daughter's school, Stephanie left work and sped to the performing arts center.


“It was just really scary because my husband works there too," Stephanie said. "I wasn’t sure if they were going to come home. Those parents whose kids didn’t come home, I’m so sorry. I don’t know why this happened, but I’m praying for them.”

She added, “You never know when it’s going to be your last day, so I’m very thankful to have my daughter with me and my husband.”

Around 1:15 p.m., the Arlington Police Department said, officers captured a suspect, 18-year-old Timothy George Simpkins. On Facebook, the police department said Simpkins had been charged with three counts of aggravated assault with a gun.

"I wasn’t sure if they were going to come home." - Stephanie Wade, mother

Arlington PD has not released the names of the victims: a 15-year-old boy reportedly in critical condition; a 25-year-old man; a teenage girl who had sustained minor injuries; and another adult who declined treatment.

At least two of the victims had been shot.

Authorities believe the shooting took place during a fight between students. An alleged video of the brawl quickly circulated on social media.


This is how the Shooting started, a fight broke out and Timothy George Simpkins Started shooting. He is currently missing, Arlington Police say he may be driving a 2018 Silver Dodge Charger LP: PYF6260 pic.twitter.com/p9lvR8tJo6

Simpkins was tracked down and located outside his home Harris Ridge Drive in Arlington, not far from the school.

Timberview High School was on lockdown, with police cordons blocking the roads leading to the building.

Local law enforcement was searching the school along with the FBI and the Bureau of Alcohol, Tobacco, Firearms and Explosives, or ATF.

"We're on the scene here and we'll be handling the evidence processing inside the school," Katherine Chaumont, a spokesperson for the FBI field office in Dallas, told the Observer by telephone.

At a press conference earlier in the day, Arlington police Assistant Chief Kevin Kolbye said the shooting was "not a random act of violence" and that "this is not somebody attacking our schools." 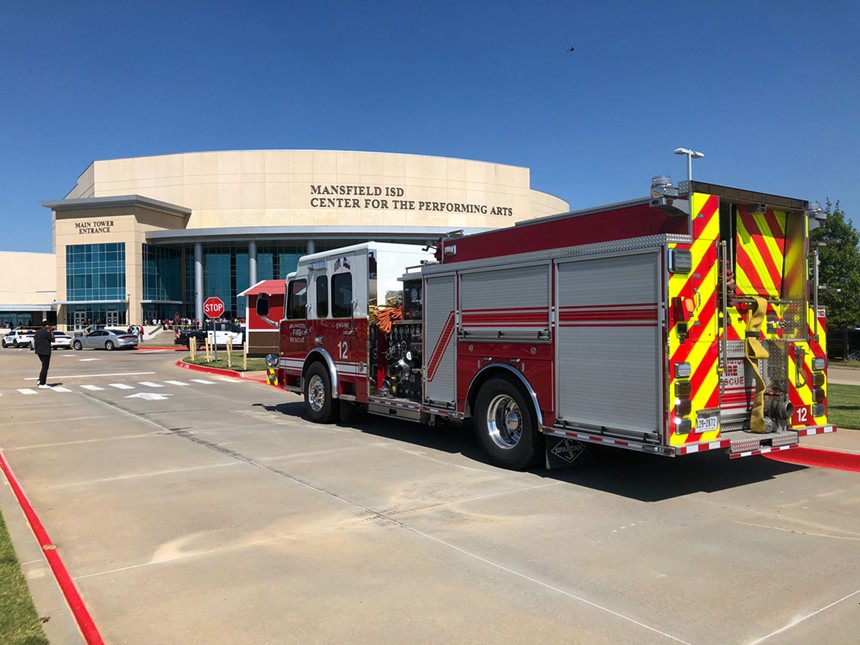 Students were evacuated to the Mansfield Performing Arts Center after the shooting Wednesday morning
Jacob Vaughn
In 2020, the Gun Violence Archive, a nonprofit watchdog, documented 611 mass shootings around the country. So far this year, the group has tallied at least 532 mass shootings nationwide.

Timberview High School, which is part of Mansfield Independent School District, has around 1,900 students.

On Wednesday afternoon, Texas Gov. Greg Abbott released a statement expressing condolences for "the victims of this senseless act of violence."

"Thank you to the law enforcement officers and first responders who arrived on the scene to help the victims and prevent further violence," Abbott said.

"I have spoken with the Mayor of Arlington and offered any assistance the state can provide, and I have directed the Texas Department of Public Safety to make state resources available to help bring the criminal to justice," the statement added.

Texas Democratic Party Chair Gilberto Hinojosa also released a statement on Wednesday afternoon. "I’m heartbroken to hear of the shooting at Timberview High School today," the statement said. "My thoughts are with those injured, their loved ones, and everyone affected by these events."

Meanwhile, back at the performing arts center, parent Christal Britton said she hadn’t heard from her son James since he went to school Wednesday morning. It wasn’t until around 2 p.m. that she learned the boy was safe.

"I’ve been crying, just worried, trying to get ahold of [my son]." - Christal Bitton, parent

Christal and her daughter Quiana said the morning started just like any other. Then, Quiana received a text from her cousin, who also attends the school, saying that a shooting had happened on campus.

"I was asking her what’s going on and she sent me a video of two boys fighting — the shooter and the one that got shot," she said. "After that, for a while she was quiet.”

Quiana said they got an email that said the WiFi was down for Timberview and other schools in the area. Her brother’s phone works operates on WiFi, which might explain why they had weren't able to reach him. It wasn’t until her cousin spotted Quiana's brother in a crowd of students at the performing arts center that they knew he was all right.

The whole day, Christal said, “I’ve been crying, just worried, trying to get ahold of him.”

Christal said she’s not sure she can trust her children will always be safe in school.

“It’s like you can’t trust your kid to go to school no more,” Christal said. “Are they going to get shot? It’s scary, just scary.”

With additional reporting by Patrick Strickland
KEEP THE DALLAS OBSERVER FREE... Since we started the Dallas Observer, it has been defined as the free, independent voice of Dallas, and we'd like to keep it that way. With local media under siege, it's more important than ever for us to rally support behind funding our local journalism. You can help by participating in our "I Support" program, allowing us to keep offering readers access to our incisive coverage of local news, food and culture with no paywalls.
Make a one-time donation today for as little as $1.