Seeking Justice for Protesters Injured by Dallas PD, Attorneys Say Civil Suits May Be Only Hope

An after-action report on three tense days of Dallas protests last summer found some errors by cops, but laid a lot of blame on "rioters." Melissa Hennings
When Dallas Police Chief Eddie Garcia came to North Texas, he showed up with lofty goals. In June, not long after he took over the role, he said he wanted to keep bad apples from ever making it onto the force and ensure the good apples turned in the bad ones.

Daryl Washington and Michelle Simpson Tuegel, two of several attorneys who together represent several protesters injured during Black Lives Matter protests in summer 2020, have been hopeful for more transparency and a culture shift among Dallas police. Still, they say, the jury is still out on whether Garcia will make good on these promises.

In pursuing the protesters’ cases, Washington said, the city and the police department seem dead set on protecting the bad apples. “We’ve had to fight so hard just to get the identity of the officers who are involved in this case,” he said. “What’s sad is that we have been getting so much resistance from the city attorney’s office.”

One of his clients is 27-year-old Brandon Saenz. He was shot in the eye with a foam bullet that shattered bones, robbed him of sight in his left eye and knocked out seven teeth.


“When you have something that’s so egregious, as this is, I’m not even sure why you would have so much resistance from the city attorneys, from the Dallas Police Department,” Washington said. “Their job is to protect the citizens of Dallas and not try to cover up for bad police officers who have harmed individuals.”

The two attorneys said it was upsetting to hear recently that a DPD investigation concluded Sgt. Roger Rudloff hadn't done anything wrong during the protests, which broke out in the wake of George Floyd's killing in Minneapolis last May.

During one rally, Jantzen Verastique was near the entrance ramp to Interstate 35 at Commerce Street when she saw a group of officers rushing protesters nearby. She yelled at officers to stop. Rudloff fired a pepper ball launcher and struck her in the chest from only a few feet away. Police investigators told her to file a complaint, but no one ever updated her with the outcome.

As it turns out, DPD found no evidence that Rudloff committed a crime, a police spokesperson told The Dallas Morning News.

Rudloff’s attorney, Robert Rogers, insists his client used the pepper ball launcher appropriately and in accordance with DPD guidelines and best practices. “It is common practice for the Dallas County [District Attorney] to present use of force cases to a Grand Jury, regardless of whether probable cause exists,” Rogers said. “I fully expect a Dallas County Grand Jury to have access to the entire investigation and to fairly apply Texas law in clearing Sgt. Rudloff.”

[The city] should want to get rid of bad police officers just as bad as the public does.” – Daryl Washington, attorney

Pepper ball launchers are meant to be fired at the ground to help disperse crowds, but DPD policy allows officers to shoot people with them if they pose a serious physical threat.

Lawsuits have been filed against the city, the department and its officers, and they're working through the courts, Washington and Tuegel said. Tuegel said they’d prefer if they didn’t have to pursue civil suits, but cases like Rudloff's suggest civil suits may be the only means of getting justice for their clients.

She explained that civil lawsuits "are sadly becoming even more important," citing a lack of results from law enforcement's reviews and adding that civil suits allow them "to dig into all of the truth and facts" of DPD's actions during the protests. 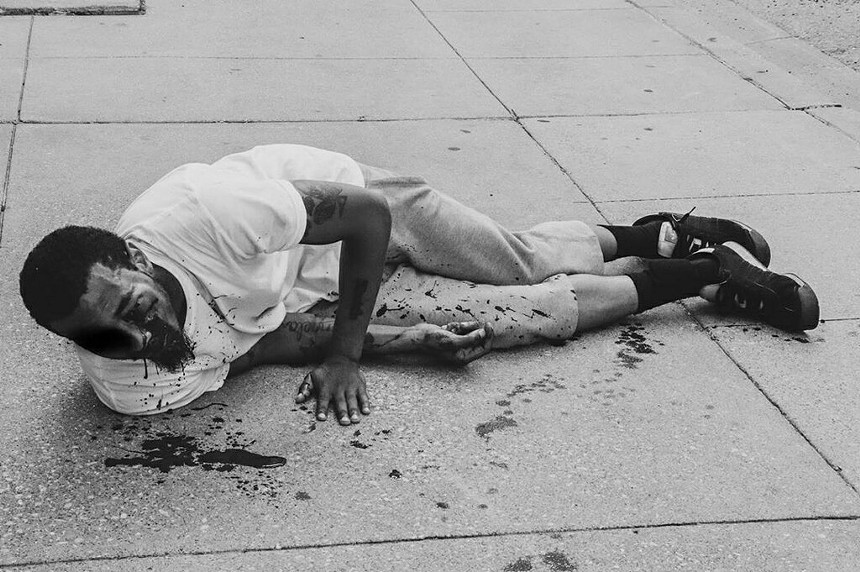 Brandon Saenz lies on a sidewalk bleeding from his eye after a Dallas police officer shot him in the face with "less-than-lethal" ammunition.
Photo provided by attorney Daryl Washington
Tuegel blames the department and the city for the situation. “I think in the background and in the backdrop of some of these issues, we can’t exclude the current and former police chief in turning the tide," she said. "I think the future will tell what this new police chief is really about and whether this is really a different culture."

But Mike Mata, president of the Dallas Police Association, said the chief’s hands are somewhat tied when his own public integrity unit finds no offense occurred. Mata points out, though, the county can still pursue the case further. The Dallas County Courthouse, Mata said, has an investigation. "So if Dallas County feels that it needs to go further, they’ve got every right to push that further," he explained. "That’s the process that is in place."

Still, Mata defended Rudloff, arguing that the officer didn’t have any other choice. He said Verastique was trying to prevent a lawful arrest. “She’s attempting to prevent him from making a lawful arrest, so she’s committing an offense. What are his options?” Mata asked.

“Does he go hands-on? In other words, he’s wrestling her and wrestling her. Is that going to look good on TV? Is that going to look good in the picture? No,” Mata said. “Does he tase her? You can’t. She’s too close. It’s completely ineffective. Does he hit her with a baton? No because that is a hard, empty-impact weapon. Can’t do that. So, he used a crowd control, non-deadly force option, and that’s hitting her with a pepper ball.”

Mata’s rationale for Rudloff’s actions is similar to Garcia’s rationale for using tear gas on protesters.
“The irony is the use of a chemical agent is probably the least amount of physical force you’d have to use,” Garcia told the Observer earlier this year. “Although, it doesn’t look good in American cities to use that, and I understand that … so you have to be judicious when you use it.”

Mata said if investigators and prosecutors look at the intent behind officers’ actions during the protests last summer, they’ll be exonerated. “I think that’s what people are missing,” he said. “Was there malice? Was the officer, without cause or justification, attempting to injure somebody?”

Over a year ago, the DA asked for the public's help gathering information about police misconduct during the protests last summer.
Jacob Vaughn

Dallas County District Attorney John Creuzot told the Morning News last month, “I can assure you that those cases have not been resolved, finished and closed out of this office."

On the Rudloff investigations, Washington said, “I guarantee you, if it was a law enforcement officer who was injured by somebody, it wouldn’t be dropped. It’s just a double standard that we see.”

For Tuegel and Washington, the process has been slow and tedious, partially owing to the pandemic and partially because they’re receiving resistance from the city and police department. Tuegel also said they are concerned about and looking into whether the city’s recent data loss will affect their cases.

In the meantime, the lawyers plan to keep trying to push the case forward.

“We’re going to work to try to make sure that things start to pick up a little bit, but as long as we continue to get this resistance from individuals who have access to this information, it makes it absolutely tough,” Washington said.

“At the end of the day," he added, "the question needs to be answered: Why is there such a push by the city to protect bad officers? Is it because of financial incentives? Is it because of embarrassment? What is it? They should want to get rid of bad police officers just as bad as the public does.”
KEEP THE DALLAS OBSERVER FREE... Since we started the Dallas Observer, it has been defined as the free, independent voice of Dallas, and we'd like to keep it that way. With local media under siege, it's more important than ever for us to rally support behind funding our local journalism. You can help by participating in our "I Support" program, allowing us to keep offering readers access to our incisive coverage of local news, food and culture with no paywalls.
Make a one-time donation today for as little as $1.