National Transportation Safety Board investigators examine the failed Southwest jet engine Tuesday night. National Transportation Safety Board
Late Tuesday afternoon, Southwest Airlines CEO Gary Kelly refused to guess at what caused an engine on one of his airline's jets to explode Tuesday morning, shattering one of a Dallas-bound plane's windows and killing an Albuquerque woman. Jennifer Riordan, a 52-year-old bank vice president, is the first passenger to die in Southwest's 50-year history.

"It's premature to link it to other engine failures that have occurred," Kelly said. "Only a handful of similar incidents have happened."

Data from Flight Aware, a flight-tracking website, shows the aborted route taken by the plane, which left New York's LaGuardia Airport three minutes early at 10:27 a.m.. As it headed southwest toward Dallas, Southwest Flight 1380 turned abruptly east toward Philadelphia after losing the engine.
click to enlarge 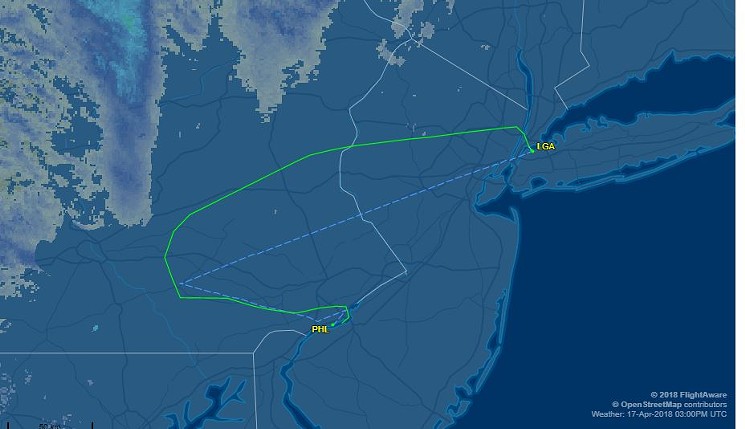 FlightAware XML
As the plane changed its route, it descending quickly, going from an altitude of 32,500 feet to landing in Philadelphia in less than 20 minutes.

As the plane descended, passengers on board, having just seen Riordan nearly sucked out of the broken window, believed they were going to die.

"I literally bought WiFi as the plane was going down because I wanted to be able to reach the people I loved ... thinking these were my final moments on earth," Marty Martinez, the CEO of Dallas marketing firm Social Revolt posted on Facebook Tuesday evening. "And put in a position to have to prioritize the people I loved to send them my final words was an absolutely gut wrenching feeling. So I thought to Facebook LIVE my experience, thinking this would be my last communication with the people I loved and my team back home."

Martinez's live videos of the flight were shared around the world.

The plane used for the flight was a Boeing 737. It made its first flight for the airline in 2000, Kelly said, and had been overhauled 10,000 cycles ago (a takeoff and landing are one cycle). Southwest overhauls its engines every 30,000 cycles, according to Kelly.

Kelly praised the flight's five-member crew for landing the plane with only one of flight's 144 passengers seriously injured.

"The aircraft was at altitude," Kelly said. "This was a very serious event, and I'm obviously very grateful there were no other injuries other than the one fatality."

In late 2015, Southwest settled, without admitting liability, a $12.5 million Federal Aviation Administration claim over allegations that a contractor improperly installed fasteners and sealant on 44 planes' fuselages between 2006 and 2009.

"We are pleased to have reached a comprehensive settlement with the U.S. government over matters that are now fully resolved and far behind us," Southwest said at the time. "The safety of our aircraft remains our top priority, and to that end, we remain committed to meeting or exceeding all applicable FAA safety regulations."

National Transportation Safety Board Chairman Robert Sumwalt said late Tuesday night that Flight 1380 was routine for 20 minutes. At that point the engine failed, possibly because of a missing fan blade. According to Sumwalt, one of the engine's fan blades snapped off due to metal fatigue.

"It was broken right at the hub [of the engine]," Sumwalt said. "Our preliminary examination of this was that there was evidence of metal fatigue where the blade separated [from the engine]."

Sumwalt said that Southwest will conduct an enhanced inspection of its entirely fleet in response to the incident. NTSB inspectors will also be coming to Dallas to inspect Southwest's maintenance records.