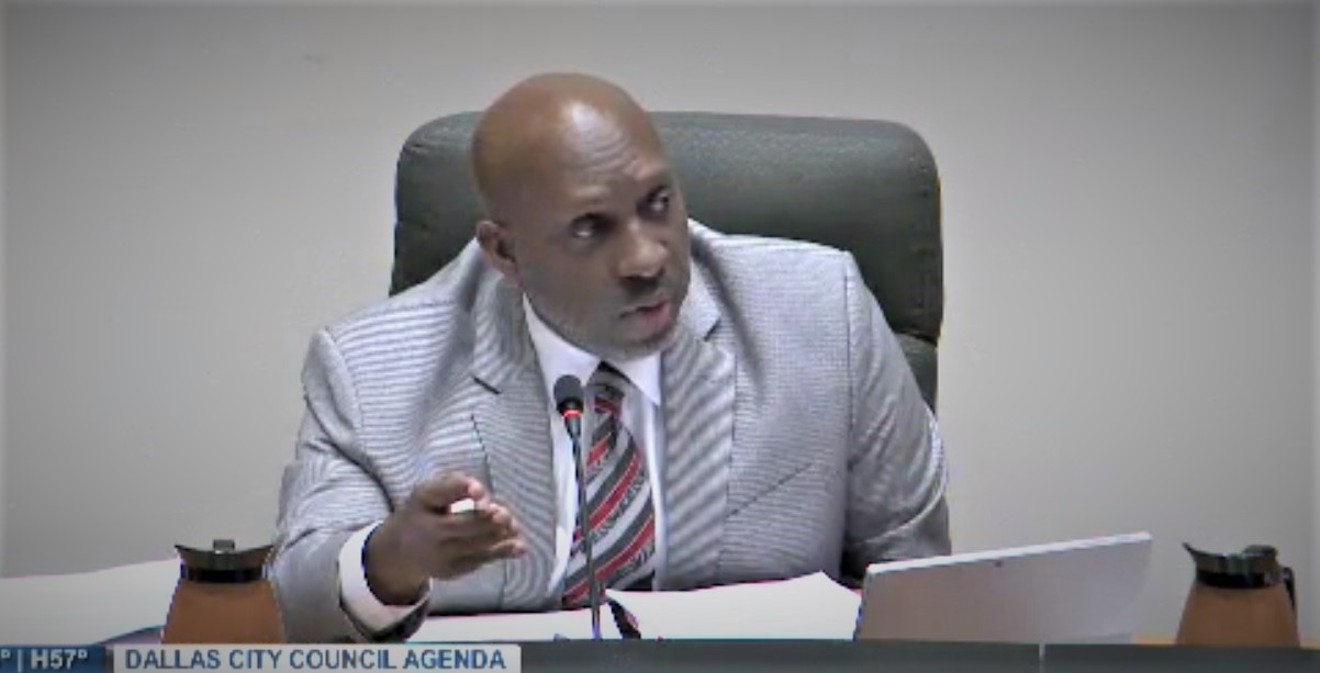 Dallas City Manager T.C. Broadnax has been on the job since 2017. dallascityhall.com
On Wednesday, the Dallas City Council was supposed to meet behind closed doors to discuss City Manager T.C. Broadnax’s performance and whether disciplinary action should be taken against him. When it was finished, they'd continue with a public, special-called meeting to vote on what to do with Broadnax.

One option was to fire him. But the day before the meeting, plans changed. The council decided it would instead consider Broadnax’s performance on June 23, which was the original course of action before city officials sent out memos asking for the meeting to be held this week.

Though this has been brewing for some time, the recent threat to the city manager’s job appears to have been sparked by a memo containing the signatures of five City Council members. The names signed on that memo seem to be Chad West, Cara Mendelsohn, Paula Blackmon, Jesse Moreno and Adam Bazaldua. The memo was essentially asking for the performance review to be added to Wednesday’s City Council agenda.

But on social media, Bazaldua said he asked that his signature be removed from the memo because he claimed it was added without his consent. Besides that, the memo was also filed without the consent of three of the other signees, Bazaldua claimed.

“That five-signature memo was not only filed without the consent of three of the signees, it was also explicitly asked by all three to remove their names/signatures once the memo was brought to our attention,” Bazaldua said in a series of Facebook comments about the rescheduled performance review. “Mayor’s staff fabricated this memo and submitted it to themselves.”

Bazaldua added: “Also, per our council rules, five-sig[nature] memos send items to be vetted in committee before making it to an agenda, so beyond the fact that this is a fraudulent memo, it’s also requesting something that is not in compliance with our City Council rules.”

“Mayor’s staff fabricated this memo and submitted it to themselves.” – Adam Bazaldua, Dallas City Council

In the comments, Bazaldua attached an image of an email he sent to the city secretary regarding the memo. “I am requesting you to remove my name and signature from this memo immediately and I will send a memo/statement to follow that will address the memo being filed without all parties knowledge and/or support,” his email read.

Tristan Hallman, Mayor Eric Johnson's chief of staff, disputes Bazaldua’s claim. He told the Observer it’s untrue that Bazaldua’s signature was used without his consent. “He consented and had his staff send his e-signature (I believe he was in Puerto Rico at the time) on Wednesday morning last week,” Hallman said through text. “The council member was copied on the email.”

D Magazine obtained a copy of an email from one of Bazaldua's assistance with his electronic signature.

West told the Observer on Wednesday that he consented to his signature being added to the memo, “but did not consent to the memorandum being used for anything other than discussion purposes with the city manager.”

“My understanding from Tristan Hallman was that it would not be filed unless he had consent from all five of us,” West said. He has since asked for his signature to be removed from the memo. "At no time did anyone inform me that the memo had been filed that morning."

Hallman said the memo was filed to create an official record “so that no one could question the authenticity of the document.”

Apparently, the five-signature memo wasn’t used for anything. It was a memo sent by Johnson that set the executive session, while a memo sent by City Council members Paula Blackmon, Gay Donnell Willis and Cara Mendelsohn set the special-called meeting to consider disciplinary action against Broadnax. Those council members and the mayor cited continued problems at the city’s permitting office, with homelessness, and the massive Dallas police data loss last year as reasons for the city manager’s potential firing.

“[Bazaldua] consented and had his staff send his e-signature ..." – Tristan Hallman, Chief of Staff

Phil Crone, executive director of Dallas Builders Association, told the Observer this week he supported hiring a new city manager. The group also sent out a press release this week saying as much. Jim McDade, president of the Dallas Fire Fighters Association, also said in a press release that the group supported firing Broadnax over pay disputes, slow repairs to damaged fire stations and the city’s slow permitting process.

But on Tuesday night, Johnson’s office sent out a statement saying the city manager’s performance review had been postponed to next week. He canceled the executive session scheduled for yesterday. The special-called meeting was canceled too.

“Several of the City Councilmembers who had initially asked the mayor to place the executive session item on the June 15 agenda have since expressed their desire to revert to the process planned by the Ad Hoc Committee on Administrative Affairs, which had tentatively called for a potential June 23 special-called meeting,” the statement said.

“I do not mind taking another week to ensure my Dallas City Council colleagues can get comfortable with the process,” Johnson said in the statement. “I look forward to discussing our city’s direction and future next week.”

Johnson has gone on record saying he would vote to fire Broadnax.

Four other City Council members – Carolyn King Arnold, Jaime Resendez, Omar Narvaez and Paul Ridley – told The Dallas Morning News they think Broadnax should keep his job because he’s making progress and budgeting season is right around the corner. Eight votes, a council majority, are needed to fire Broadnax.
KEEP THE DALLAS OBSERVER FREE... Since we started the Dallas Observer, it has been defined as the free, independent voice of Dallas, and we'd like to keep it that way. With local media under siege, it's more important than ever for us to rally support behind funding our local journalism. You can help by participating in our "I Support" program, allowing us to keep offering readers access to our incisive coverage of local news, food and culture with no paywalls.
Make a one-time donation today for as little as $1.