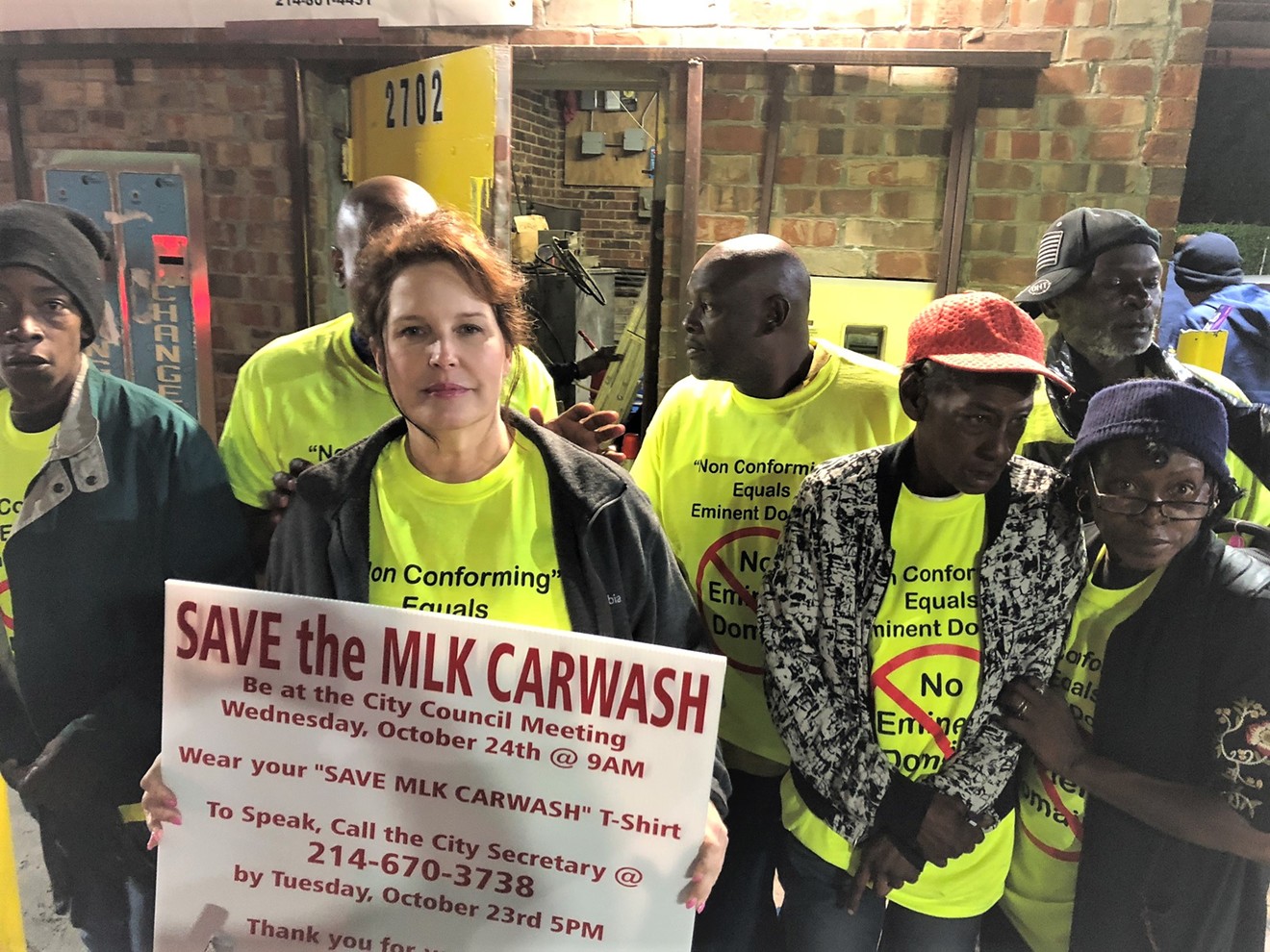 Last Saturday night at Jim's Car Wash on MLK. Jim Schutze
Today the Dallas City Council will be asked to vote to commit a form of public fraud. The council will be asked to launch a process that would shut down a private business as a public nuisance, even though years of extraordinary effort have failed to prove it’s a nuisance.

But this vote is about more than that. It’s about a certain animus deep in the soul of the city. Partly but not strictly about race, the thing I’m talking about is a devout bent-knee, heads-down worship of respectability, shared alike by the old white and black leaderships of a harshly segregated city. The flip side is a horror of vivacity and spontaneity among certain people.


The editorial compounds a years-long legacy of dishonest reporting on the car wash, usually based on no reporting at all.

Five years ago Dallas Mayor Mike Rawlings went to the chief of police and asked him to carry out intensive undercover narcotics operations at Jim’s Car Wash on Martin Luther King Jr. Boulevard in South Dallas, just over a half-mile southwest of Fair Park. The police chief declined.

The cops know the place well. If you really wanted to devote X-many tens of thousands of dollars in police salary and expense to the car wash, police officials told the mayor and council years ago, your reward would be catching some people with small amounts of weed and pills in their pockets.

The same amount of effort and expense would scare up the same amount of drugs at any prosperous shopping center in white Dallas. So what? Juries these days don’t convict the way they used to in Texas for petty drug offenses. It’s a waste of police resources.

And yet, just yesterday in an editorial calling once again for the car wash to be shut down, The Dallas Morning News insisted that, “Open drug sales aren’t uncommon, according to police reports that document how people congregating at the car wash work in concert with drug dealers from a nearby home.”

The editorial compounds a years-long legacy of dishonest reporting on the car wash, usually based on no reporting at all. Four years ago a Morning News editorial page writer said in an opinion piece, “The police reports are rife with arrests for drug-related activity at Jim's Car Wash.”

So there’s a way for a newspaper to make that point and make it stick. Pony up those police reports. Go get them. Show them to the reader. That’s what newspapers are supposed to do. But four years ago, as in yesterday’s editorial, there were no police reports in the Morning News opinion piece. Instead, in a serious attack of self-drama, the writer said, “I've seen the activity with my own eyes.”

Well, guess what? That’s not a police report. That’s an editorial writer report. Take that to a grand jury and see what you get (can’t get in to see the grand jury, I would bet).

After the chief told the mayor that undercover drug operations would not work at the car wash because it is not a center of drug sales, the mayor hit on a new strategy, which he told me about. The car wash would be declared a public nuisance, which would allow the city to shut it down by taking away its zoning retroactively. It’s a quasi-political process that does not require the same hard evidence as criminal prosecution.

In fact, that campaign has been underway for the last four years. The car wash fell squarely within the proper zoning for the area when the current owner bought it. The effort to have it declared a nuisance is based on a change made to the zoning seven years after it was purchased.

The Morning News said yesterday in its editorial, “Jim’s Car Wash is a place that shouldn’t be where it is. The zoning for the property doesn’t permit a car wash. It’s a nonconforming use, in the city’s parlance.”

Well, dear reader, that statement is a series of nested lies. First of all, the car wash did comply with the underlying zoning when the owner bought it. When the zoning was changed, the use was grandfathered and allowed to remain, mainly because in America a local government cannot simply seize property — in this case the business activity itself — without due process.

By the way, due process and respect for property rights are not themes that appear anywhere in the editorial philosophy of the Morning News. These days the paper’s increasingly pathetic editorial philosophy seems to be “In what new ways can we suck up to you so you won’t cancel your subscription?” Predictably, they get even that wrong.

Even if the car wash does not conform to the new zoning, that does not make it, as the paper claims, “a place that shouldn’t be where it is.” A non-conforming but grandfathered use can stay right where it is forever, unless it is declared a public nuisance.

That’s what the years-long campaign by the mayor and some council members is all about, but we have to wait and see what the outcome is before we know that the car wash isn’t right where it belongs. At the very least, if the Morning News editorial page had wanted to make even the slightest gesture toward honesty and balance, it could have mentioned some of that legally mitigating information to you.

By the way, you might be interested to know how badly City Hall wants to make this case. The police force in Dallas is so short-handed right now that police officers can’t show up at all for certain kinds of calls all over the city — calls that used to get quick response.

But even in the midst of this crisis-level shortage of police resources, since last May the Dallas Police Department has been offering time-and-a-half overtime pay and time-and-a-half time off to employees of all ranks to carry out surveillance in a desperate search for evidence to bolster the public nuisance case against the car wash.

As a former Dallas police chief has observed on my Facebook page, time-and-a-half time off only exacerbates the staffing shortage. I hope that’s something the council will ask the city manager about today.

Don't you wish you could get some of those overtime cops to patrol your neighborhood?
Jim Schutze
This has been going on for a very long time. Twelve years ago, Dallas City Hall’s abuse of power against the car wash grew so egregious that it attracted the attention of a joint Texas House and Senate investigative committee in Austin. In a March 6, 2006, report never fully acknowledged by the Morning News, the committee found that Dallas had been using the car wash owner’s own persistent reporting of crime as evidence against him to prove he was causing crime.


These days the paper’s increasingly pathetic editorial philosophy seems to be “In what new ways can we suck up to you so you won’t cancel your subscription?” Predictably, they get even that wrong.

At this and other businesses citywide in Dallas, the report found, undercover police were encouraging criminal activity at certain businesses and then using that activity as public nuisance evidence against the business owners. Members of the City Council, meanwhile, were shaking down the same businesses for so-called campaign and charitable contributions.

This week’s guilty plea to federal corruption charges by former Dallas City Council member Larry Duncan says something about the culture of politics and campaign contributions in this city. His plea had nothing to do with the city, which he left long ago. But he started thinking he could get away with spending generous amounts of campaign money on his personal appetites somewhere, and my guess would be Dallas City Hall.

I think this brings us back to the beginning and to a truly perplexing question: If the car wash guy is a crime fighter, not a criminal, and if his place is an island of relatively law-abiding behavior in a sea of criminality, then what is the explanation for this 13-year campaign to get rid of him?

I thought I glimpsed the real answer in a particularly prescient comment a guy made on a Facebook post of mine last weekend. He said the role of the car wash as a focal point of sociability ought to make it an asset in this age of better blocks, walkability and organic community. I mean, are better blocks and walkability just for white folks?

If there are some ragged edges, if the car wash could be better at some things, then why wouldn’t we want to do everything possible to help it grow and enhance itself? Last Saturday night when I drove down there, it was shoulder-to-shoulder and wall-to-wall with people showing off cars, washing and waxing them, laughing, dancing to boom boxes, eating food from the several vendors parked along the perimeter.

My son was with me. (I’m old. He gets my back.) He got caught in a long conversation with a guy who was clearly way stoned. I thought, “Gosh, I feel like we’re at Snider Plaza.”

We certainly need to be beyond all of that. So, so far beyond it. That’s what this vote is about today.
KEEP THE DALLAS OBSERVER FREE... Since we started the Dallas Observer, it has been defined as the free, independent voice of Dallas, and we'd like to keep it that way. With local media under siege, it's more important than ever for us to rally support behind funding our local journalism. You can help by participating in our "I Support" program, allowing us to keep offering readers access to our incisive coverage of local news, food and culture with no paywalls.
Make a one-time donation today for as little as $1.