The group started to coordinate efforts and discuss how they could heal racial divides in 2015.

"After Trayvon Martin, Eric Garner, Ferguson — about three years ago — there were a lot happening," Warren tells the Dallas Observer. "Almost every week, it seemed, something different was happening. And the racism was just heightened. It felt like we were back in the '60s. And so we talked and said, 'Man, what if Ferguson comes to Dallas?'" 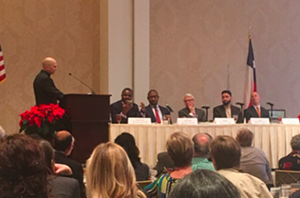 The Dallas Bar Association's Rob Crain hosts a panel of faith-based Dallas leaders to discuss race relations in the city.
via @MarciaTillman on Twitter

In early 2016, David Brown, then chief of the Dallas Police Department, told the Observer that he believed Dallas hadn't experienced a Ferguson-like incident because of the department's work in the community.

"We were ahead of what happened in Ferguson," he said. "We had similar incidents to Ferguson, Missouri, a year prior, but because, I think, of how we responded, because of our work in the community, we’ve been able to maintain our trust in the community. We haven’t had the type of protests that you see in other major cities."

It's not always easy to bring up the topic of race, Stern says. For example, he delivered a message of unity after the violence surrounding the removal of a Confederate statue in Charlottesville, Virginia. That message, he says, was met with some displeasure from his synagogue. Several members told him that some things — including race relations — shouldn't be discussed.
Having an open dialog helped the interfaith leaders prepare for what did happen in Dallas: the July 7, 2016, shooting of five police officers during a peaceful Black Lives Matter protest.  Because of their weekly meetings, Warren says, he and the others were prepared.

"The shootings happened, and sure enough, because of the meetings we had, I can tell you that we did know each other," Warren says. "That's why the mayor called us and said, 'I know what you guys are doing in the city. Please come to Thanksgiving Square; we're going to have a prayer for the city.' So he calls us because of the work already been done. Unlike Baltimore, unlike Ferguson, we were ready because of our relationships."