The Mavs Aren't the Only Ones: Dallas' 10 Biggest Sports Scandals 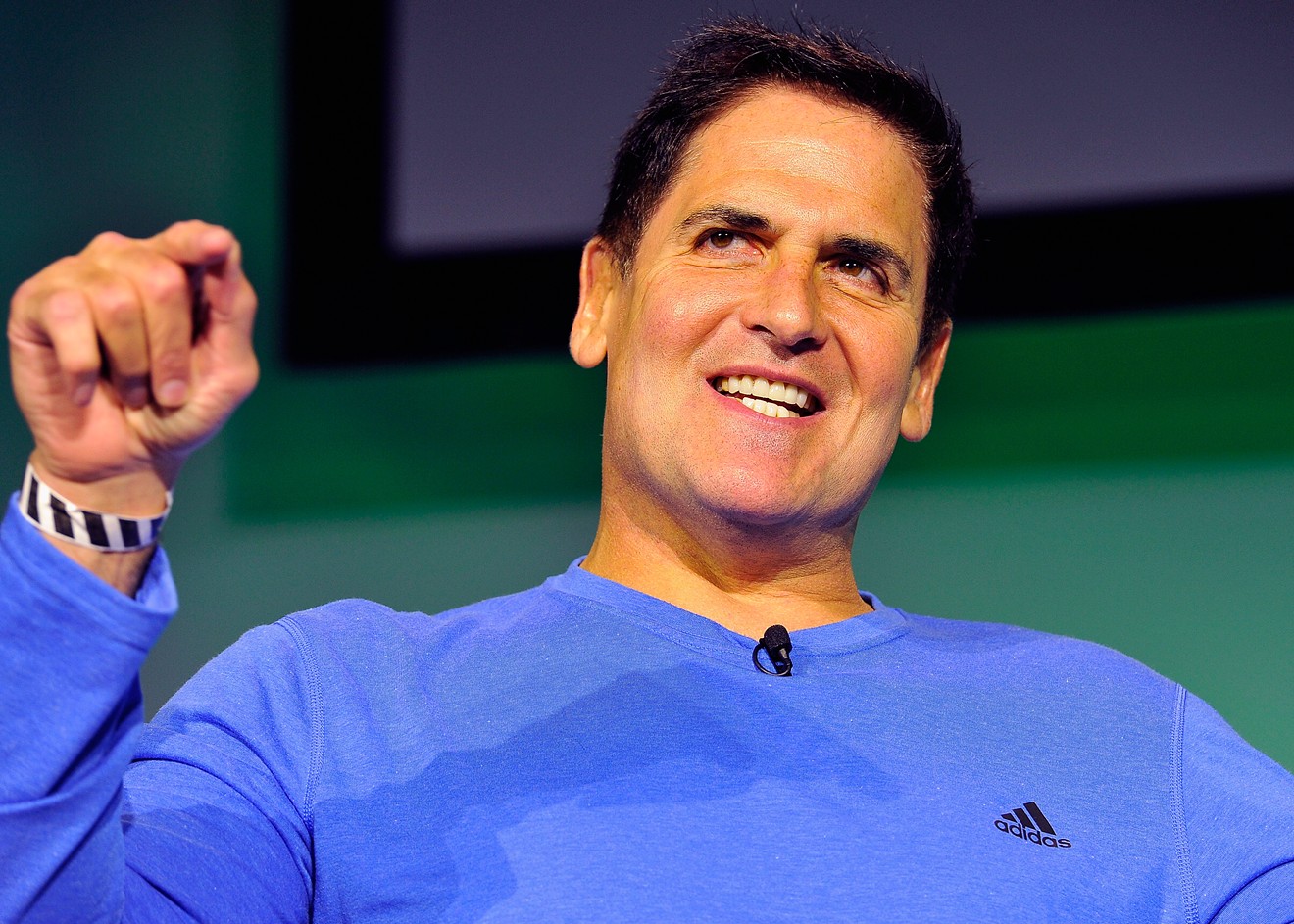 Mark Cuban at TechCrunch 2014. TechCrunch via WikiCommons
It's easy to forget, as much of a pro sports town as Dallas has become, that the city's professional sports history is a comparatively short one.

After a couple of false starts by both the NFL and AFL versions of the Dallas Texans, Dallas finally got its first permanent pro team when the Cowboys moved into the Cotton Bowl in 1960. The Cowboys were alone until 1972, when the Washington Senators moved into Arlington Stadium, a converted minor league park, and became the Rangers. The expansion Mavs and the relocated Stars completed Dallas' four-sport set when they took up residence in Reunion Arena in 1980 and 1993, respectively.

Despite having a half-century shorter sports history than cities like New York and Boston, Dallas has packed it in, winning seven championships, suffering a series of heartbreaking losses, and often making headlines for the wrong reasons, thanks to the players', owners' and team executives' indiscretions. Sports Illustrated published an explosive exposé Tuesday of the Mavericks' front office culture under owner Mark Cuban, including details of sexual harassment, coercion and domestic violence allegedly committed by team employees, including longtime team President Terdema Ussery.

While the revelations about the Mavs are shocking, it isn't the first time scandal has shaken Dallas' sports community, not by a long shot. Here are the 10 biggest scandals in Dallas sports history.

1. The Cowboys party at their White House.
During the team's early '90s apex, multiple members of the Cowboys team that would end up winning three Super Bowls from 1992-95 partied at an infamous home, called the White House, rented by wide receiver Alvin Harper. Drugs and prostitutes were apparently plentiful in the house. When reporters asked star offensive guard Nate Newton about what went on at the house, he was candid.

"We've got a little place over here where we're running some whores in and out, trying to be responsible, and we're criticized for that, too," Newton said.


2. Texas Rangers infielder Lenny Randle attacks Frank Lucchesi.
Frustrated that rookie Bump Wills might take his starting job and furious that Rangers manager Frank Lucchesi called him a punk in the press, Rangers second baseman Lenny Randle sucker-punched his boss in March 1977, then continued to attack him as he fell to the ground.

Randle's assault might have been premeditated, too. The week before his punch, he told reporters that he was "a volcano, getting ready to erupt" because of his belief that Lucchesi was slighting him.

The Rangers suspended Randle for 30 days before trading him to the Mets the next month.


3. Johnathan Turner kills Troy Causey.
On March 23, 2014, Johnathan Turner beat his roommate Troy Causey to death in Oak Cliff after a dispute over a video game boiled over. As police investigated the crime, however, they learned that Turner and Causey, both teenagers, were living together because they'd both been illegally recruited to play basketball at Dallas ISD schools for which they were ineligible to play. After an investigation, Dallas ISD's James Madison High School, for which Turner played, gave up both its 2013 and 2014 Class 3A state championships.

Turner pleaded guilty to manslaughter and was sentenced to seven years of probation.


4. Toni Braxton breaks up the Mavs. Maybe.
After suffering through several of the worst seasons in NBA history in the early '90s, the Mavericks used a series of high draft picks to build a promising nucleus, a group of young players who became known as the "Three Js." Jamal Mashburn, Jimmy Jackson and Jason Kidd never played in a playoff game, however, thanks to their constant feuding. Things between Jackson and Kidd allegedly came to a boil when singer Toni Braxton went to a hotel in Atlanta in the winter of 1996 to meet Kidd for a date but left with Jackson.

Kidd demanded a trade, and the Mavs quickly sent him to the Phoenix Suns. A couple of months later, Jackson was traded to the Nets. While Kidd and Jackson have denied the rumors in the years since, Braxton was more equivocal when talking to the press.

"I've at least heard of them, [but] as far as dating, whether it's true or not, I can never kiss and tell," she told one reporter.


5. Ezekiel Elliott dooms the 2017 Cowboys.
When the Cowboys drafted Ohio State running back Ezekiel Elliott in 2016, they thought they were getting a sure thing. On the field, they were right. Elliott is a complete back, one of the best runners, blockers and pass catchers in the NFL.

Off the field, Elliott has been a nightmare. In August 2017, NFL Commissioner Roger Goodell suspended Elliott based on a series of detailed domestic violence allegations made against Elliott by his ex-girlfriend Tiffany Thompson. Elliott lost his ensuing legal battle, missing most of the season's last two months. If he violates the NFL's personal conduct policy again, Elliott could be banned from the NFL for life.


6. A Rangers great travels with a suitcase full of steroids.
While Juan Gonzalez is, without question, one of the five greatest Rangers of all time, he'll never be remembered as fondly as Pudge Rodriguez, Adrian Beltre or Ian Kinsler, thanks to his repeated connections to steroids.

In October 2001, Canadian Border Service agents caught Angel Presinal, a member of Gonzalez's entourage, picking up a duffel bag filled with anabolic steroids and hypodermic needles. Presinal told the agents that the bag and everything in it belonged to Gonzalez, but the agents let both men go after more than four hours of questioning.

The shadow of that night, along with accusations made about his steroid use by Jose Canseco in Canseco's memoir, Juiced, have clung to Gonzalez ever since. Although he's a two-time American League MVP with more than 400 career home runs, Gonzalez fell off the Hall of Fame ballot after just two years of eligibility, unable to meet the 5 percent standard required to remain a candidate for induction.


7. SMU gets the death penalty.
After years of warnings and lesser sanctions for violations of its rules and regulations, the NCAA imposed its harshest ever sanction on Southern Methodist University in February 1987, banning the school from participating in football in the upcoming season. Over the preceding season, the school had unprecedented success on the field, thanks to a series of star recruits, including running backs Craig James and Eric Dickerson, lured to the Hilltop with cars and cash.

After the penalty, SMU crashed so hard that the NCAA hasn't issued the so-called "death penalty" to any school since.


8. Jerry Jones goes to court with a stripper.
Jana Wackerly, a former stripper, sued Cowboys owner Jerry Jones in September 2014 for allegedly rubbing and grabbing her without permission before forcing her to watch as another woman performed oral sex on him. While both parties eventually agreed to drop the lawsuit, the graphic pictures of the night in question, posted to Twitter by Frank Hoover, a Dallas sports scene hanger-on, will live on forever.

The Sins of Jerry Jones by Enrique Espinoza on Scribd


9. Sports Illustrated calls out the Mavericks toxic workplace culture.
While the fallout from Tuesday night's story hasn't been fully realized, it's clear that owner Mark Cuban has a big problem on his hands. Rumors about Ussery appeared in local media as early as 1998, 17 years before he left the team. Earl K. Sneed, a writer for the Mavs' website, kept his job as a team employee although Cuban was aware of multiple instances of domestic violence involving Sneed. The NBA is investigating the Mavs, and punishments levied against the team could be severe.


10. Carter High School football players participate in a robbery ring.
The 1988 Dallas Carter Cowboys remain one of the most talented teams in Texas high school football history. The team's roster featured 36 seniors. Sixteen of those fourth-year players went on to earn full football scholarships from Division I schools. Another 12 underclassmen eventually received scholarships from major colleges. Five players from the team, including five-time Pro Bowler Jessie Armstead, played in the NFL, a remarkable feat for an underfunded public school.

There's another stat, however, that earns Carter a spot on this list. During the 1989 spring semester and the summer that followed, 13 Carter students, including several football players, committed 21 armed robberies, mostly in fast food joints and video stores in the neighborhood.

The team vacated the state championship it won — part of a separate academic controversy — and six members of the team, including Derric Evans, an all-American defensive back with a full scholarship to the University of Tennessee, spent time in jail.