Attacks on Griggs, Attacks on Kingston, All Have Same Scary Shadow 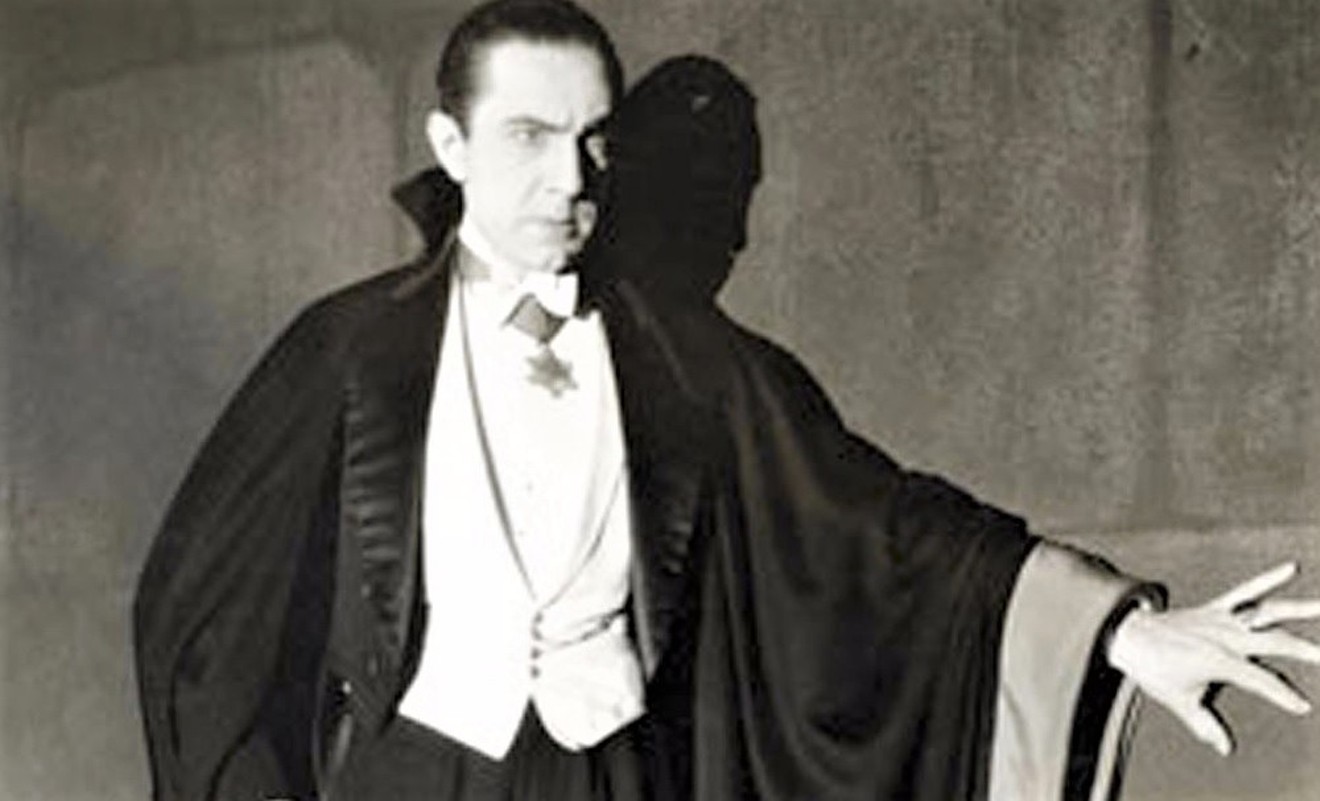 Can we not see more truth in the shadow than the face? (Scary music in background.) Universal Studios 1931 Wikipedia
Sometimes you learn more about people in politics from their shadows than their faces. Serial efforts over a period of years to take down two progressive Dallas City Council members have cast the same kind of shadow consistently.

In the effort, mostly failed I think, to dirty up council members Philip Kingston and Scott Griggs, the persistent suggestion is that both men are diametrically the opposite of what they seem. Oh, no, don’t buy that stuff about their being idealistic young champions of stronger neighborhoods and the greater good. No, they are conniving hoods whose only ruthless goal is their own enrichment and power.

I find myself wondering. Is this a strategy? Is it some kind of cloak and dagger Moscow rules for taking out adversaries? Or is it a worldview? Does it reflect a sincere belief that people not of one’s own tribe — people who fail to genuflect on the right teeing ground — have got to be monsters. If they don’t look like monsters outwardly, it’s some kind of trick.

Here is a first clue. The old-guard establishment tends to view Griggs and Kingston as twins, when in fact they could not be more unlike each other as persons. Kingston is in-your-face and on-your-case. Griggs, on the other hand, seems to operate on a seven-second delay. You can see him pausing before every answer.

I think in a way each of them reflects subtle differences in the parts of town they represent. Again, the old guard looks at Kingston’s East Dallas realm and Griggs’ Oak Cliff constituency as mirror images, because both are places where the citizenry often has been at odds with the old guard. But, you know, there’s more to life than just how people feel about the old guard.

When The Dallas Morning News editorial page tried to go back to the crypt and excavate fingersgate, we waved the cross in front of them, and they threw their hands before their faces and fled the scene.

East Dallas has been a tough political battleground for decades. Now one of the most successful residential and commercial regions in the inner city, East Dallas only got that way by fighting tooth and nail against old-guard zoning initiatives that would have turned it into an urban desert. Not one of the lessons of those wars has been forgotten. The fact is that East Dallas will not elect a representative who doesn’t look tough enough to keep up the fight.

Speaking of what you can learn from shadows, the old establishment, spoken for by the incumbent mayor and the editorial page of The Dallas Morning News, casts exactly the same shadow every time Kingston runs for re-election. Again in the current election cycle as it did last time around, the News editorial page is endorsing a Kingston opponent on the grounds that he’s a nicer guy.

“(David) Blewett exhibits a more nuanced understanding of the way to attract business and to balance quality of life concerns of residents …” the endorsement editorial said. Somehow after all these years and repeated resounding defeats, the Morning News editorial page still fails to grasp that “nuanced” in East Dallas means traitor. In District 14, a guy is nuanced when the boys downtown have already trained him how to get down on all fours and beg for biscuits.

By the way, I don’t know Blewett, have never met him and have no basis whatsoever for believing he begs for biscuits. Often the men and women recruited to run against the favorite in District 14 have scant idea what they’re even getting into. I wind up feeling sorry for them, because, like Matt Wood, the last nice guy the old guard ran against Kingston, they often really are nice guys. But District 14 isn’t looking for that kind of nice.

Kingston is the kind of nice District 14 is looking for, because he stopped the illegal giveaway for Fair Park, got taxes down three years in a row, wrangled more bond funds for streets and infrastructure than any other district, helped stop gas drilling in parks — the list goes on. Voters in District 14 understand that all of that was accomplished against and in spite of bitter opposition from the mayor and the ruling cabal. District 14 wants the kind of nice guy who’s very smart but also pretty good with a spear and one of those big balls on a chain with sharpened spikes all over it. Nuance, not so much.

Griggs’ district in North Oak Cliff is quite different. Another extremely successful example of inner city resurgence, District 1 was so far off the charts of the old guard’s map of expectation, so utterly foreign to their concept of cool, that until very recently they never even tried to grab it by the collar. I think the case of North Oak Cliff demonstrates that simple neglect can be a wonderful shelter for urban areas in the long run.

When North Oak Cliff began to surge 15 and 20 years ago, it was more of a flowering than a battle. North Oak Cliff’s brilliant success has been fairly collaborative. Oh, they have had their battles, but their best developers, people like David Spence, came from and completely got the neighborhood. They weren’t foreigners anointed by the News and the Citizens Council, charging in on ponies hacking at the homeowners’ heads with polo mallets the way developers had earlier in East Dallas.

So it made sense that North Oak Cliff sought out a more deliberative person in Scott Griggs to represent it downtown. Griggs, like Kingston, is tough and smart. I wouldn’t call him nuanced, because I still think that’s a dirty word. But even though he and Griggs have been allies on a series of urban issues from affordable housing to economic equity, they clearly are very different types of people. No one who looked at them even briefly could miss those differences.

And that brings me back around to the consistent sameness of the efforts to sully them, to stop their political careers and quash their influence by proving them to be monumental Academy Award-deserving actors and fakes. In Griggs’ case, the most egregious of these efforts was the “fucking fingers” accusation: Griggs four years ago, shedding his clever disguise as a polite family man, is supposed to have threatened to break the fingers of a female city employee. No charges were ever brought, and the whole thing floated away on its own bad air.

Scott Griggs, left, Philip Kingston, two very different people, unless you just see both of them as being in your way.
dallascityhall.com
But when Griggs began running for mayor, The Dallas Morning News editorial page started invoking fingersgate in weekly editorials designed to paint him as a wolf in sheep’s clothing. The Dallas Observer published a cover story a month ago including audio recordings of all the police interviews with witnesses to the original fingers complaint, including the alleged victim, stating that the alleged attack never happened.


Kingston is in-your-face and on-your-case. Griggs, on the other hand, seems to operate on a seven-second delay from talk radio.

I happen to know that since then and for some time, the News has been in possession of the same recordings. At the risk of stirring them up again, I feel compelled to observe that since acquiring the recordings the News has gone silent on fingersgate.

Now more recently we find that an anonymous complainant with a high degree of sophistication about how things work at City Hall has filed an ethics complaint against Kingston alleging a conflict of interest. For years Kingston lobbied the City Council to make “accessory dwelling units” (garage apartments) legal, in part to give legitimacy to a widespread practice already in place in much of East Dallas. Last June the council agreed. At some point after that, Kingston and his wife, Melissa, began building a so-called “granny flat” above their own outbuilding.

The complaint, cleverly formulated to allow its author to remain secret, alleges that Kingston’s whole multiyear lobbying effort was a clever plot to enable Kingston and his wife, both well-employed lawyers, to get rich renting out a granny flat. Under any reasonable theory of law, Kingston could not be accused of a conflict of interest for championing a change in law that benefited everybody else in East Dallas as much as it did him. But the city’s so-called Ethics Advisory Commission happens to be a deep and dank moral mausoleum where deeds too foul for daylight are carried out, and so the anonymous complaint lives. We can expect to hear a lot about it soon on the Morning News editorial page.

In the meantime, this is what strikes me. Never once have we seen Kingston or Griggs on the dirty end of this stick, mounting these kinds of malevolent, devious accusations against their political adversaries. As I have said already, they’re both tough, and they both fight hard for causes they believe in, but they fight on the issues. This kind of vampire bat attack — the shocking allegation that swoops in suddenly from a moonless night — always comes from the other side. Always. Think about it.

First think about credibility over time. These things never make. They never survive daylight. The rush of wings, the screech and then they’re gone. When The Dallas Morning News editorial page tried to go back to the crypt and excavate fingersgate, we waved the cross in front of them, and they threw their hands before their faces and fled the scene.

Then think about questions of character and what we can read in these strange shadows. Who believes that this is how the world should work, that anyone who disagrees with you is a filthy foe and utter destruction is fair play even if done with lies? I look at that stuff too long, and I just want to run outdoors and get a gulp of fresh air.
KEEP THE DALLAS OBSERVER FREE... Since we started the Dallas Observer, it has been defined as the free, independent voice of Dallas, and we'd like to keep it that way. With local media under siege, it's more important than ever for us to rally support behind funding our local journalism. You can help by participating in our "I Support" program, allowing us to keep offering readers access to our incisive coverage of local news, food and culture with no paywalls.
Make a one-time donation today for as little as $1.