Bikes Roll In, Lee Rides Out: Dallas Arrivals and Departures 2017-18

The Robert E. Lee statue stood in Lee Park, now Oak Lawn Park. Patrick Williams
Along with a hangover, New Year's Day brings the chance to look forward and backward. At the Observer, that means paying tribute, for good or ill, to those newsmakers who left the DFW stage in 2017 and announcing those who stepped up to it 2017, or will step up in 2018. As we come down from the longest news year of our lives, let's say hello and goodbye.

Bike-share bikes
Over the summer, they appeared first silver and mustard, then orange, green and yellow, swarming downtown, Deep Ellum and the Katy Trail. Dallas' first dockless bike-share bikes, thousands of them, quickly became ubiquitous, offering rides to commuters and the curious for a buck. While there's been some backlash to the bikes on social media, LimeBike, one of the biggest bike-share players in the city, says it has nearly 45,000 active riders in Dallas.

U. Renee Hall (right) visited Dallas City Hall in July.
Avi Adelman
U. Renee Hall
Hall, Dallas' first female police chief, took over the top job from interim Chief David Pughes just after Labor Day. During her first four months on the job, she's streamlined the Dallas Police Department's command structure, ordered an intensive investigation of the department's vice squad and helped respond to a hit-and-run as she delivered Christmas presents as part of a charity event. She's also taken heat for her failure to detail the problems that led her to break up the vice unit, as well as the fact that she has yet to pass a Texas licensing exam that will allow her to formally be sworn in as chief.

Willie Calhoun
YavapaiCollege via Youtube
Willie Calhoun
While the Rangers didn't get a huge return when they dumped former ace Yu Darvish at the trade deadline, they did get Calhoun, an all-hit, no-glove second baseman from the Dodgers. After joining the Rangers organization, Calhoun showed surprising defensive competence — albeit in left field, rather than at the keystone — and continued to rake at the plate. If Calhoun starts 2018 with the big club, he may be the best reason for Rangers fans to trek to Arlington during what could be a lost 2018.

The Dallas Mavericks selected Dennis Smith Jr. at their ninth pick in the 2017 NBA Draft.
NBA via Youtube
Dennis Smith Jr.
Thanks to their worst season in 19 years, the Mavs had their highest draft pick in decades this summer. Rather than trade down, as they've done repeatedly during the Mark Cuban era, the Mavs stayed at No. 9, drafting Dennis Smith Jr., perhaps the most exciting player available. The Mavs still aren't any good, but Smith has shown flashes of brilliance while averaging 13 points and four assists per game. When the next great Mavericks team gets here, Smith will be leading the charge.

Yu Darvish
In July, the Rangers traded the best starting pitcher the team's ever had. For six maddening season in Texas, Darvish never led the Rangers to a championship and had enough meltdowns and genuinely strange games that he acquired all sorts of labels he didn't deserve. For the most part, though, Darvish days, the days he was slated to pitch, were magical. Blessed with an arsenal of pitches unique in the big leagues, Darvish dominated when he was on and healthy, striking out batters in bunches. Assuming the Rangers don't re-sign him in free agency, his loss leaves a crater in the team's starting rotation.

Dallas County Sheriff Lupe Valdez rode in Oak Cliff's 2016 Mardi Gras parade.
Melissa Hennings
Lupe Valdez
In December, just before Texas filing deadline, four-term Dallas County Sheriff Lupe Valdez turned in her badge to run for governor against incumbent Greg Abbott. Valdez, 70, has a decent shot at the Democratic nomination, thanks to a thin field, plus a national reputation buoyed by a prime-time slot at the 2016 Democratic National Convention and a public fight with Abbott over sanctuary city policies. Valdez faces an uphill climb against Abbott and his $40 million war chest, but Dallas County won't have her to kick around anymore.

The empty platform on which the Robert E. Lee statue stood.
Jim Schutze
Lee Park's Robert E. Lee statue
After white supremacist violence in Charlottesville, Virginia, in August, the Dallas City Council voted 13-1 to remove the Robert E. Lee statue from Lee Park in September. After a couple of false starts — the first crane on the scene wasn't right for the job, then a temporary injunction briefly halted the removal, then another crane was in an accident on the way to Dallas — the statue was finally removed Sept. 14. Shortly thereafter, Dallas' Park Board rechristened the park, too, as Oak Lawn Park.

We're begging you, Joe, put down the camera.
Jonathan Ernst/Reuters/Newscom
Jeb Hensarling and Joe Barton
Hensarling and Barton, two of DFW's most powerful U.S. House members, aren't running for re-election in 2018. Hensarling is leaving because he's set to lose his chairmanship of the powerful House Financial Services Committee because of term limits. Smoky Joe, as Barton became known when he was chair of the Energy Committee, announced his intention to quit after a woman with whom he had a sexual relationship released an explicit photo of the 17-term congressman.

Jody Warner was tearful during her press conference.
WFAA via Facebook
Jody Warner
The Dallas County District Attorney's Office fired Assistant Prosecutor Jody Warner after her Uber driver recorded her profane, drunken rant, in which she called him "stupid, dumbass and retard" according to a criminal complaint. When the driver asked Warner to get out of his car, she refused and told him that she hoped the police would "fuck him up" when they got there. They didn't, but they quickly sent the driver on his way and gave Warner a ride to her condo, which was less than a block away. 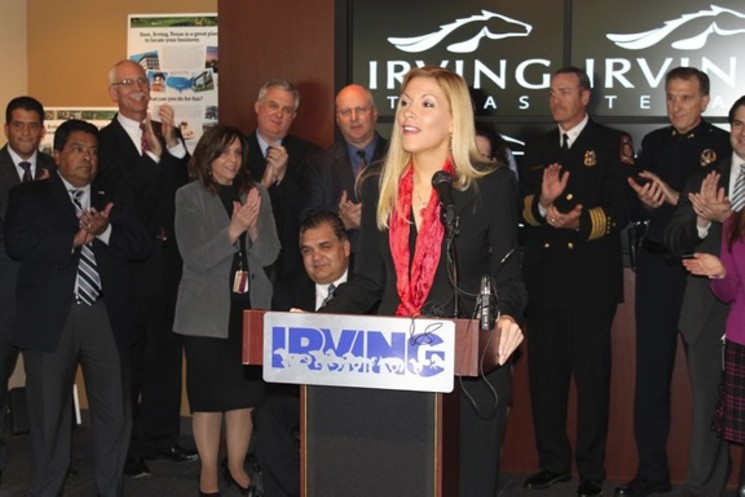