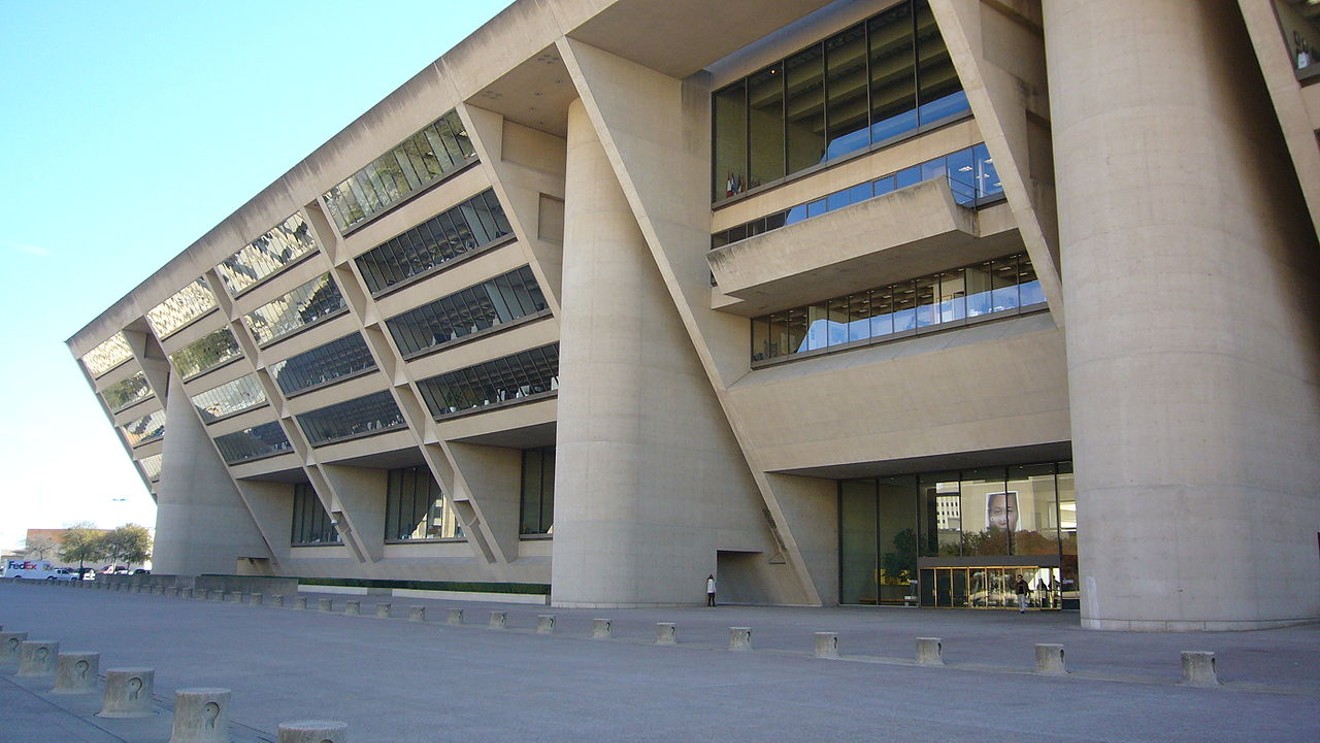 Dallas City Hall, your municipal sausage factory Kent Wang / Wikipedia
Dallas got a peek at how its new City Council is going to work Tuesday afternoon. The results, giving bonus points for about half the members being new on the job and all the members being freshly returned from vacation, were a mixed bag.

The council didn't hamstring its budgeting process before it really got started. That's good, but the fact that it even considered doing so in the first place isn't exactly comforting.

Tuesday's council meeting was supposed to be about giving members their first public look at Dallas City Manager T.C. Broadnax's new, two-year budget. It turned into an attempt to stymie the budgeting process before it even had a chance to get going.

Broadnax's budget calls for a property-tax increase of one-third cent for every $100 of home valuation. To put things in perspective, that means Dallas residents who own a $300,000 home would pay about $10 more per year in property taxes under the new rate than they would've under the old rate.

The city manager wants the rate increase in order to pump more money into public safety — a priority for much of the council — and to offset lost revenues stemming from changes to state law made by the 2019 Texas Legislature.

In proposing a rate increase, Broadnax probably knew he was in for a fight. Over the last several years, the council has managed to avoid raising rates thanks to rapidly increasing property values — they've been able to cut rates and still take in more revenue. What he might not have expected is the council trying to set a cap on potential rates prior to any debate about budget specifics.

That's exactly what the council's rejuvenated fiscal hawk caucus tried to do. After hearing from Broadnax and city staff, North and East Dallas council members pushed a pair of amendments that would've set the city's maximum possible property-tax rate at lower than the 78 cents per $100 valuation recommended by the city manager.


“It’s not about $8 to me, it’s about the message we send to our constituents." — David Blewett

Council member Lee Kleinman's plan to cut the tax rate so property taxes effectively remained the same despite increases in home values failed 14-1. But a plan that would've set taxes at no higher than the previous rate of $.7767 per $100 valuation picked up considerable support, with six City Council members — Kleinman, Cara Mendelsohn, David Blewett, Jennifer Gates, Adam McGough and Paula Blackmon — voting for the cap.

“It’s not about $8 to me, it’s about the message we send to our constituents," Blewett said. "I think it’s important to send a message that we can live within a budget."

Omar Narvaez, who represents parts of West and Northwest Dallas, said limiting the budget before the council even has a chance to work with residents to identify priorities will pit members against one another.

Kleinman's anti-tax push wasn't a surprise. During his three terms on the council, he's consistently fought for lower property taxes and against spending. He's even willing to reach out and touch the city's budgetary third rail, the 60% or so of its general fund that goes toward public safety every year. Mendelsohn, Gates and McGough, too, represent property-rich, tax-averse districts in the northern part of the city.

Blewett and Blackmon, on the other hand, represent a change in direction for their districts and the council. By virtue of their victories in June runoff elections, they took over for Philip Kingston and Mark Clayton, two reliable voices for increased city services, often by way of increased revenues. The coming budget debate seems certain to be fought on more conservative ground.
KEEP THE DALLAS OBSERVER FREE... Since we started the Dallas Observer, it has been defined as the free, independent voice of Dallas, and we'd like to keep it that way. With local media under siege, it's more important than ever for us to rally support behind funding our local journalism. You can help by participating in our "I Support" program, allowing us to keep offering readers access to our incisive coverage of local news, food and culture with no paywalls.
Make a one-time donation today for as little as $1.