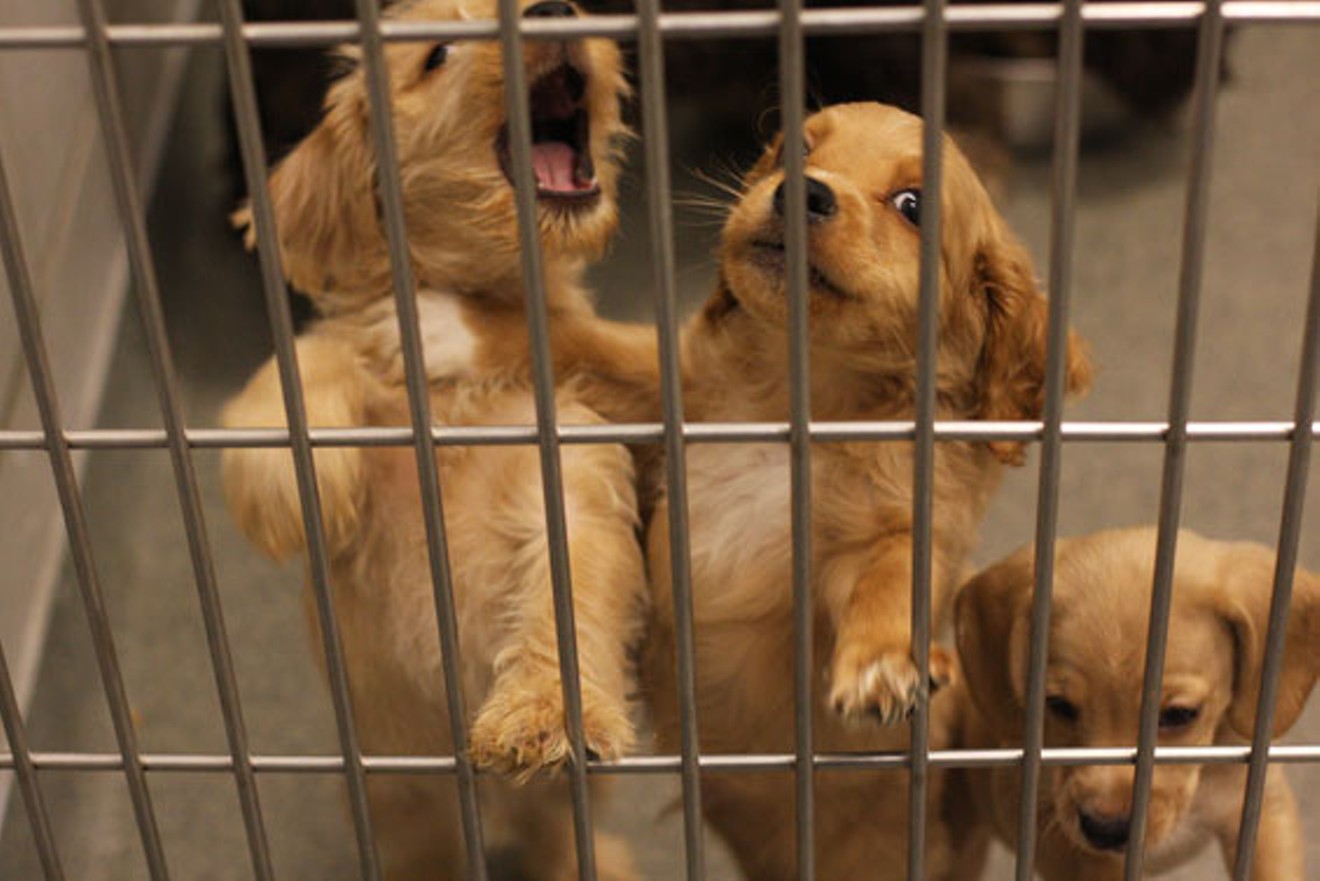 Three playful puppies at Dallas Animal Services. More dogs are making it out of shelters alive, the city says. Mark Graham
It doesn't take a particularly good memory to remember when Dallas had a problem with loose dogs. A crisis is probably a more accurate way to describe it. A 2016 study found that there were literally thousands of loose dogs roaming the streets of southern Dallas contributing to a spike in dog bites.

The city took action following the mauling death of Antoinette Brown on a vacant lot in May 2016, allocating increased cash from its budget to control dangerous dogs, make sure dog owners in Dallas are getting their animals spayed or neutered and to make sure there are fewer loose dogs on the street.

Dallas Animal Services says it's accomplishing all of those goals, while operating as a no-kill shelter at the same time.

"It took decades to get this way. It's going to take a long time to fix it, despite the progress that we've made," Ed Jamison, director of Dallas Animal Services, said Wednesday. "I would encourage you to keep up the level of funding."

According to the agency's report, loose-dog bites have gone down in each of the last three years, falling to 558 in 2019 after rising as high as 752 in 2016. Of those loose-dog attacks, 77% came from loose dogs with owners, not strays.


As the number of loose-dog attacks has gone down, the number of citations DAS has issued for dogs that aren't fixed or don't have rabies vaccinations on record have gone up, because of increased enforcement.

In 2019, DAS issued more than 20,000 citations to dog owners. Of those cases that have already been closed, however, more than half were dismissed because the dog owner fixed the issue within three weeks of being written up. In 2016, DAS issued just more than 5,000 citations.

At the same time the city has become a safer place for people, the euthanization rate at DAS has gone down as well. Dallas Animal Shelter's had an 86.4% live release rate last year, its highest in the last four years. It also took in more dogs than it did in any of those four years — nearly 40,000. The number of dogs getting put down in Dallas' shelters has decreased 72.7% since 2016.

"Where we were then to where we are now," Dallas Mayor Pro Tem Casey Thomas said, "I can't even come up with the words to talk about the transformation that's taken place."

Adam McGough, chair of the City Council's Public Safety Committee, said the problems Dallas faced three years ago threatened to become a blight on the city.

"This is kind of a litmus test for a city," McGough said. "If you can't even pick up the stray dogs, what are you doing with the rest of the city? This is really the first time I've felt like we were going in the right direction for a long time."
KEEP THE DALLAS OBSERVER FREE... Since we started the Dallas Observer, it has been defined as the free, independent voice of Dallas, and we'd like to keep it that way. With local media under siege, it's more important than ever for us to rally support behind funding our local journalism. You can help by participating in our "I Support" program, allowing us to keep offering readers access to our incisive coverage of local news, food and culture with no paywalls.
Make a one-time donation today for as little as $1.