Dallas Has a Road Map to Crack Down on Illegal Dumping. Will the City Use It? 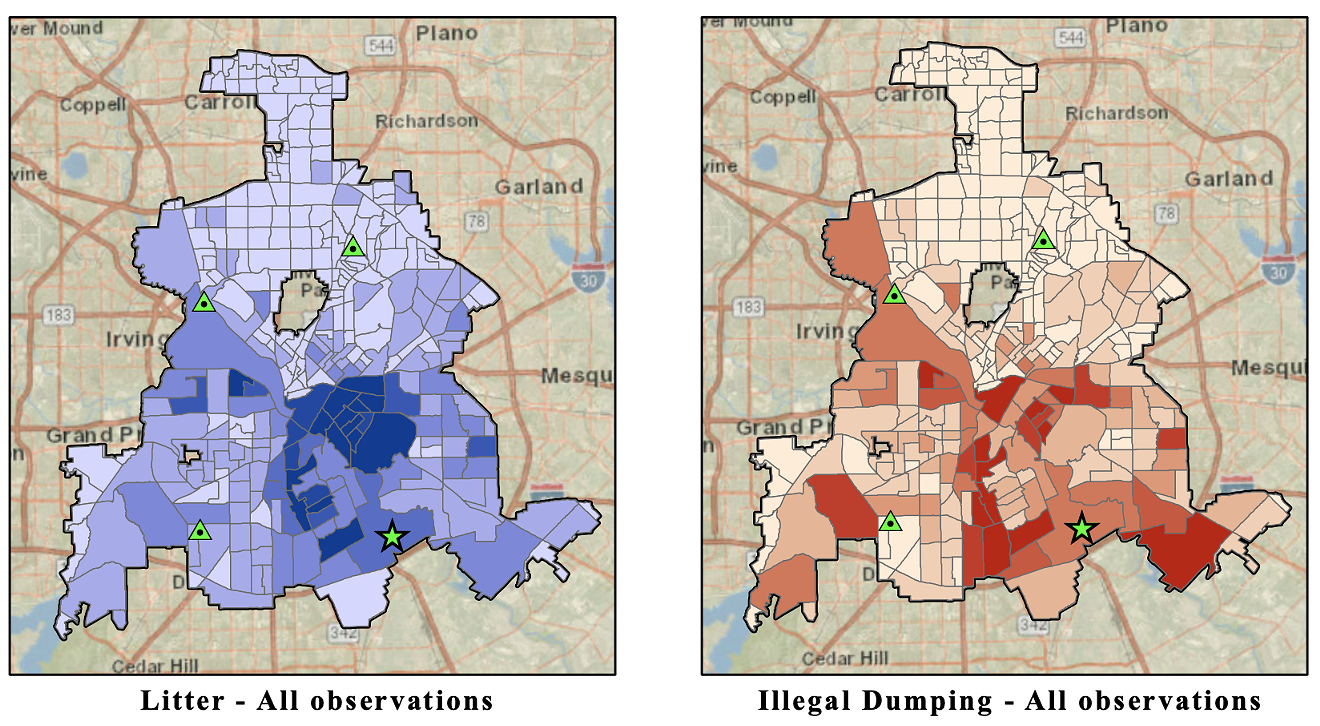 A 2018 report offers recommendations to solve a problem that has long plagued southern Dallas. City of Dallas
For more than a year, Dallas has been sitting on a report addressing the city's trash problem. It lays out recommendations for reducing litter and illegal dumping — problems concentrated in historically underserved communities in southern Dallas.

Now, according to a top official, the city will be implementing them.

The report, conducted by a consulting firm that has done similar studies across the state, was commissioned by the city's Office of Environmental Quality and completed in September 2018.

It itemized the more than $20 million the city spends each year combating the problem and found that the city spent essentially nothing on preventing littering and illegal dumping.

In comparison, the nine other Texas cities analyzed in the report spent nearly a fifth of their budgets on prevention. Dallas also spent a far smaller portion of its budget on enforcement.

When the city released a draft of its comprehensive climate plan, or CECAP, earlier this month, the document made reference to this report. It recommending Dallas "expand efforts to reduce illegal dumping by implementing recommendations identified in [the report]."

The Observer asked James McGuire, the head of the Office of Environmental Quality, why these recommendations hadn't been implemented. His full response is included below.

There’s not really a “why” because it was never decided not to undertake them. Rather, we are in the process of CECAP creation, adoption, and implementation and we were fortunate to have already done the assessment which identified potential actions in that area. So we will be implementing and improving along with other items in CECAP. And it also takes time to get there — particularly with an organization as large as the City of Dallas.


The report builds off case studies of nine other Texas cities produced in 2017 by the same consultant for nonprofit advocacy group Texans for Clean Water. Those case studies analyzed each of the cities' efforts to attack the problem and cataloged their expenses. The total, more than $50 million — most of which went to cleaning up trash — amounted to more than $7 a person. Dallas was not one of the cities examined.

Maia Corbitt, the president of Texans for Clean Water, denied any association with the Dallas study. She wrote in an email that the nine cities were chosen to "represent a diversity of Texas communities" and that her organization wanted "to bring attention to the enormous, untold cost of cleaning up what is a totally preventable illegal act of convenience."

When the consultants turned to Dallas a year later, they found the city was spending a lot to fight the problem — nearly as much as the biggest spender, Houston — but was spending it differently. While other cities invested in enforcement and preventative measures, Dallas was spending millions on education.

It noted that Dallas has three ongoing outreach campaigns — Reverse Litter, the Clean Stormwater Campaign and Litter Free Dallas — "but the efforts are not always coordinated." Although the efforts are coordinated by a citywide "Litter Task Force," it lacks a single leader that could implement strategic, geographic targeting of problem areas.

"To support further development and implementation, the City has partnered with FUSE Corps who will embed an executive fellow within the City’s organization and drive new processes through innovative strategies and proven practices," wrote a city spokesperson.


According to a 2018 annual report, the city issued 1,493 citations for illegal dumping and arrested 301 people. That's fewer citations, but more arrests compared with the previous year.

Beyond education campaigns, much of Dallas' strategy to combat littering and illegal dumping laws is reactive. Residents complain to 311, and the city dispatches either law enforcement or cleanup crews.

But this doesn't always work out. Some southern Dallas residents have resorted to voicing their complaints on social media.

In November, neighbors in the Bishop Arts District in Oak Cliff posted photos online after a pile of furniture and household trash grew on their street. "After WFAA made a few calls to City Hall about the neighbors’ concerns and sent some photos and emails to staff, the dump pile quickly disappeared," the station wrote in November.

Similar stories pop up a few times a year, and every once in a while the city publicizes their efforts to crack down on the issue.

"It’s still a major problem, and the biggest thing is education,” a deputy at the Dallas City Marshal's office told NBCDFW in 2017. “We want people to know that it is a crime that you can go to jail for and it’s easy to avoid by using a landfill or the transfer stations that the city of Dallas has.”

According to a 2018 annual report, the city issued 1,493 citations for illegal dumping and arrested 301 people. That's fewer citations, but more arrests compared with the previous year.

But the city's code compliance office has only two staff members dedicated to enforcement, according to the report. That doesn't appear to be enough. The city's Marshal's Office, which is charged with enforcement of environmental regulations, told the authors of the report that "their workload could keep an additional two code enforcement officers busy continuously."

Southern Dallas communities bear the brunt of the problem. According to 311 records kept by the city, a vast majority of litter and trash complaints come from council districts 4, 7 and 8.

Those trash piles are associated with myriad public health issues, said Cassidy Campbell, a senior official at the North Central Texas Council of Governments. "Mosquitoes become a concern when a bunch of tires are lying around collecting water. It can also attract rats," she said.

The report blames small contractors, often in the construction or landscape industries, as well as grocery and convenience stores that rely on single-use packaging.

It recommended that the city require businesses to make "Litter Prevention Plans," promote someone in city management to "take ownership and provide direction" and add waste disposal locations. At the time, it noted, the city was piloting a new drop-off site for residents in southeast Dallas.

According to the city, "the pilot location planning was not advanced to development and implementation."