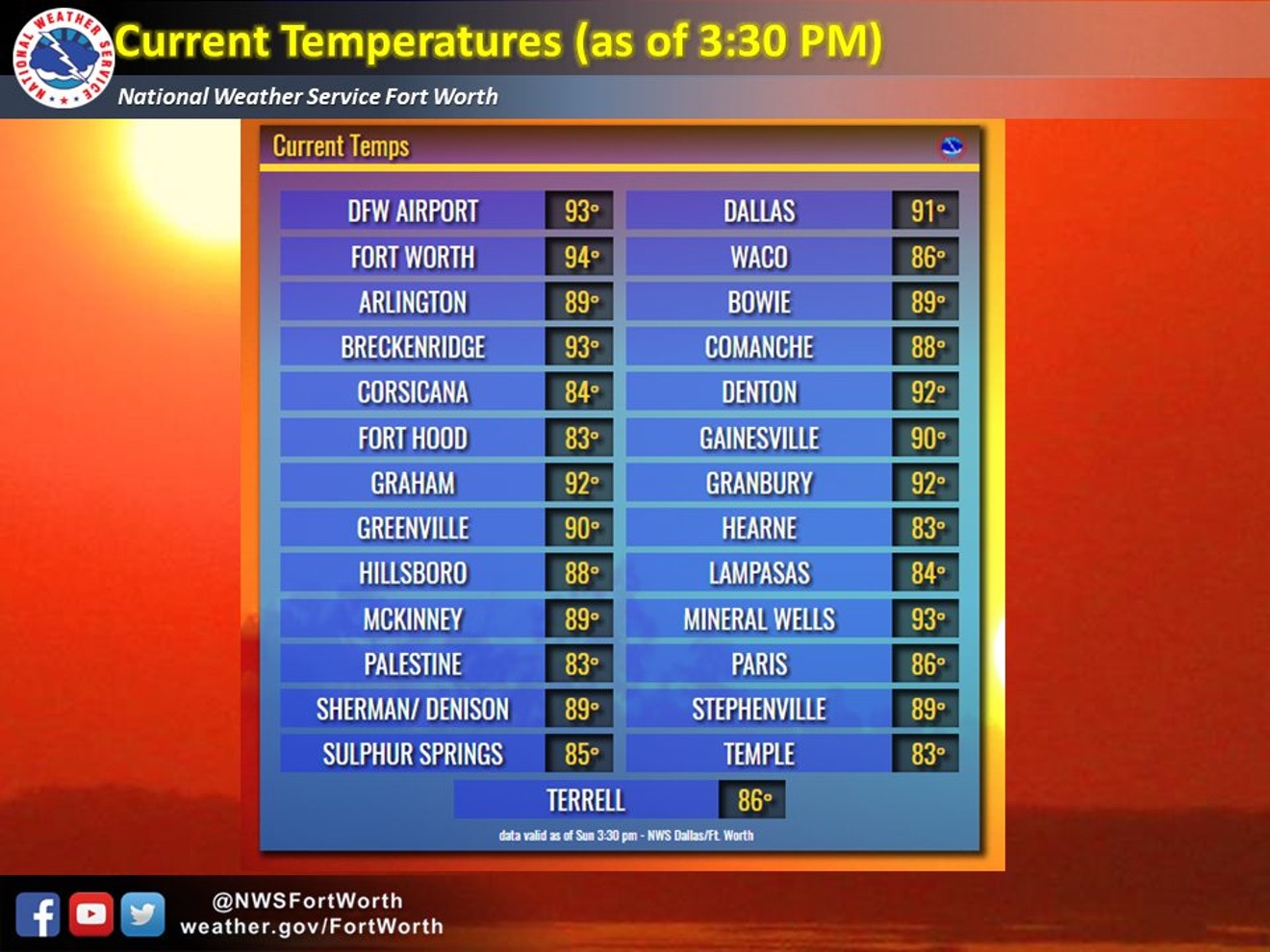 The NWS' record of Texas' high temperatures on Sunday. National Weather Service
Despite Monday's 70-something degree respite, the first week of November has been among the hottest in Dallas' recorded history. Three times, temperatures have cracked 90 degrees at Dallas/Fort Worth International Airport. Before this year, 89 was the highest Dallas' mercury had ever reached in November. According the National Weather Service, this weekend's conditions were perfect for unseasonable heat.


"It was clear [on Thursday, Saturday and Sunday], so the sun was able to warm up the atmosphere," says NWS meteorologist Patricia Sanchez. "We had a very strong high-pressure system and winds from the southwest. Usually winds coming from that direction, from Central Texas, are very dry. Winds from the north are cooler. We had a dry line close to our area, too, which brought warm air with it. We had all the ingredients."

By the time an expected cold front finally blew through DFW on Sunday night, Sanchez says, it was too late to make any difference in the weekend heat wave.


Check out the current temperatures as of 3:30 PM. Pretty hot out there! New record of 94 degrees for #DFW Airport. #dfwwx #ctxwx pic.twitter.com/rCYIIMlkAu


While the weekend's temperatures were atypical, Sanchez says they weren't that out of line from previous records. Thursday's high of 94 exceeded DFW's previous record, set in 2012, by just seven degrees, while Saturday's high of 90 broke 1987's record high by only two degrees.

"We broke the record, but it was not completely, completely different," Sanchez says.

Here's a look at the record highest temperature each month at the official Dallas Fort Worth site. Records go back to 1898. #dfwwx #txwx pic.twitter.com/QDjKJQnftU


Sanchez says that the weekend's heat wave could be a preview of what's to come for the rest of the winder. According to the NWS, the rest of November will be warmer or drier than what Dallas has seen in the past. The rest of this week is expected to be cooler, she said, with highs in the 50s and 60s. Next week, however, will see highs in the mid-70s, Sanchez says.