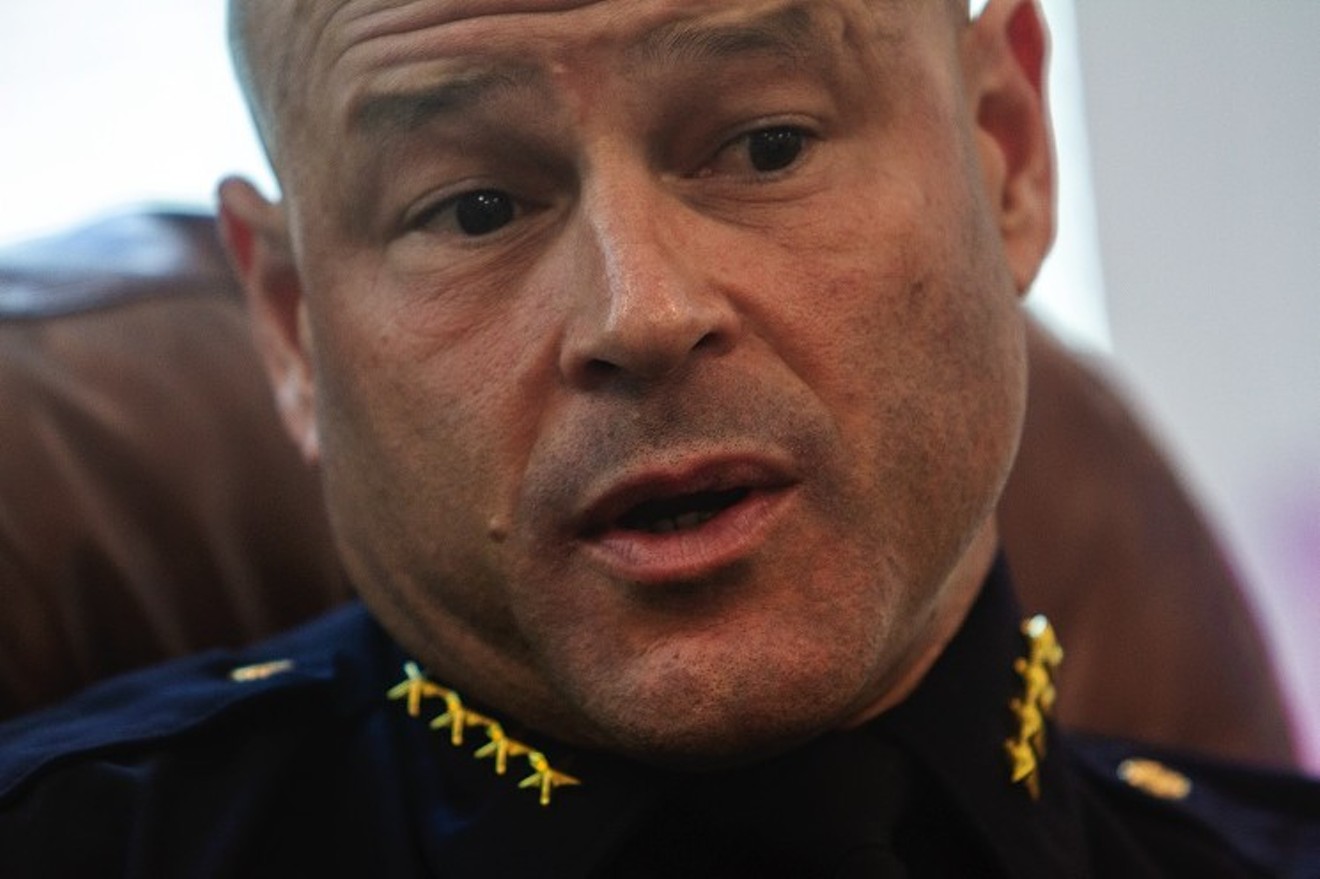 Eddie Garcia told reporters the officer had been placed on administrative leave. Mark Graham
At a press conference Wednesday, Dallas Police Chief Eddie Garcia apologized after news broke that an officer had created and tried to sell a racist commemorative challenge coin.

Speaking at the event with the Black Police Association of Greater Dallas, Garcia said the officer, whom he didn’t name, had been placed on administrative leave pending an investigation.

“I’ll tell you, we’re not going to tolerate it,” Garcia said. “A strong message will be sent that this will not be tolerated.”

Garcia confirmed that the officer was white. “We can’t allow our community to see us this way,” he said.

Earlier in the day, The Dallas Morning News reported that the coin showed an image of the Pillsbury Dough Boy with gold teeth, a gun in one hand and a wad of cash in another, standing in front of what appears to be a drug house. The coin also said, “Big T Plaza” and “South Central,” referring to a division within the police department.


The Black Police Association will discuss the coin this afternoon at a news conference. @DPDChiefGarcia confirmed he will also be there. pic.twitter.com/GhcbSG5obs

Garcia added that he apologized “to the members of our community that felt disrespected by what was depicted on that coin.”

Terrance Hopkins, president of the Black Police Association of Greater Dallas, told reporters he didn’t believe the incident was symbolic of a broader problem within the South Central Patrol Division.

Asked whether the officer in question ought to be employed at all, Hopkins said: “With the way he did this, in my view, he probably shouldn’t have a badge and gun.”

He added, “Because again, our job is to have the trust of you guys out there. We serve you guys.”

An image of the coin had also previously appeared on the Dallas Police Association's (DPA) Facebook page but was later deleted.

"Once it was brought to my attention – I had not seen it before – I looked," DPA President Mike Mata told the Observer by phone. "I, too, found it offensive and in very poor taste and deleted it immediately."
KEEP THE DALLAS OBSERVER FREE... Since we started the Dallas Observer, it has been defined as the free, independent voice of Dallas, and we'd like to keep it that way. With local media under siege, it's more important than ever for us to rally support behind funding our local journalism. You can help by participating in our "I Support" program, allowing us to keep offering readers access to our incisive coverage of local news, food and culture with no paywalls.
Make a one-time donation today for as little as $1.