Dallas Police Have Injured Protesters With 'Less-Lethal' Ammo. This Texas Bill Would Ban Its Use. 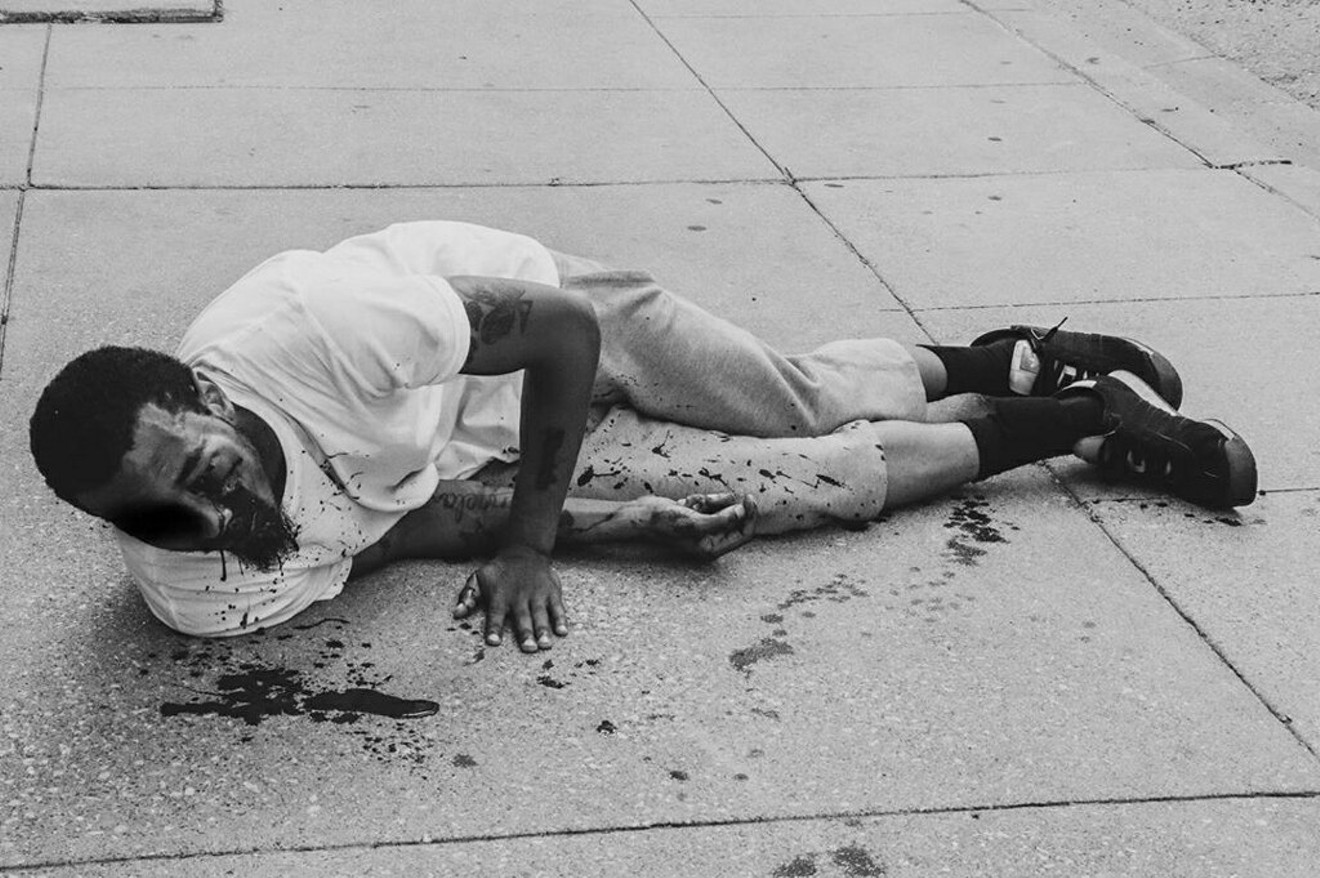 Brandon Saenz lies on a sidewalk bleeding from his eye after a Dallas police officer shot him in the face with "less-than-lethal" ammunition. Photo provided by attorney Daryl Washington
In the summer of 2020, several people in Dallas were seriously injured by what is known as less-lethal ammunition. The ammo was fired by police officers in a supposed attempt to control protesters like those who had gathered in streets across the country to protest police brutality

A local photojournalist named Vincent Doyle, for example, was shot in the face by a sponge/rubber bullet while he covered a protest in Dallas in May 2020. The round smashed Doyle’s left cheek bone, and left him with about 40% vision in his left eye. Around the same time, a Dallas protester named Brandon Saenz was also struck in the face by a less-lethal round. The shot fractured Saenz’s facial bones, knocked out several teeth and caused him to lose an eye.

A bill filed in Texas this week could spell the end of law enforcement’s use of less-lethal ammunition.

“Each law enforcement agency in this state shall adopt a policy on crowd control that prohibits a peace officer appointed or employed by the agency from using less lethal projectiles as a means to control the activity or movement of a gathering of people,” HB 974 says. Zwiener didn’t respond to a request for comment. She filed a similar bill last year that aimed to ban the use of less-lethal bean bags, but it never made it out of committee.

Municipalities across the country are having similar discussions about whether or not cops should be allowed to use less-lethal munitions.

As in Dallas, officers with the Oakland Police Department and Alameda County Sheriff’s office in California responded to the 2020 protests with tear gas canisters and rubber bullets. The rubber bullets struck two protesters, who sued the California law enforcement agencies in federal court. As part of the settlement of the suit, Alameda County agreed to ban the use of rubber bullets, bean bags and other forms of less-lethal ammunition for crowd control. These were already banned by the Oakland Police Department in 2003 except in cases where there was immediate danger of death or great bodily injury, according to CBS. However, the department ended up allowing the Alameda County Sheriff’s deputies who were helping with the protests to use the less-lethal ammunition.

“I don’t know what the public, or the small percentage of the public, wants from law enforcement." – Mike Mata, Dallas Police Association

Washington State passed a law banning the use of firearms that shoot large-caliber ammunition. It didn’t carve out any exceptions for projectiles like rubber bullets, effectively banning these less-lethal munitions. For police in the state, less-lethal options now include pepper balls shot from a paintball gun, pepper spray, Tasers and batons. Also in 2021, the Minneapolis City Council passed a ban on these weapons. It was later determined that the council lacked legal authority to do that, and the ban was reversed.

If you ask Mike Mata, president of the Dallas Police Association, banning these weapons would only lead to greater potential for violent clashes between police and protesters.

“How many times do we have to do this circle?” Mata said. “We started with the [lateral vascular neck restraint] and it was a great tool, but just like anything else, when it’s done improperly, it can injure. Then we went to the baton. Well, we can’t use the baton because it’s an aggressive impact weapon that can injure – obviously, you’re hitting someone with a steel stick. Then we went to the Taser. Well, they looked to stop doing the Taser because if you’re a person who’s going through some form of drug-induced or you’re in poor health there’s a chance you could have a heart attack. Then, we had to stop using the pepper spray for the same reasons.”

Mata said these munitions were used over 400 times during the Dallas protests in 2020, and that only a handful of people were injured, “most of them injured due to their own actions.” He said investigators are still looking into whether the use of these munitions was justified in every incident.

“I don’t know what the public, or the small percentage of the public, wants from law enforcement,” Mata said. “Every time we attempt to use something other than our weapon to disperse, there’s a call to get rid of it when there’s an injury.”

He said there aren’t a lot of ways to disperse a crowd. “You only have a few options,” he said. “40 millimeter [sponge rounds] or gas. And gas gets everybody.” If these options are off the table, Mata said officers would have to resort to hand-to-hand combat. “Now you’ve really got a problem,” he said.

Instead of an outright ban of these weapons, Mata suggested lawmakers look into how they can ensure everyone is properly trained in how to use them. To him, all of the North Texas police departments that responded to the Summer 2020 protests used the less-lethal weapons properly because they all received the same training. However, this isn’t necessarily true for police departments across the board. "A lot of these smaller towns don't have the budgets, the training budgets to train everybody the same way," he said.

Mata said the Dallas Police Association and others across the state are working on their own reform bill that would ensure law enforcement agencies receive the same kind of training. "During these riots that we had in Dallas, we had 11 different municipalities come help us," he said. "So, you've got to hope all 11 use the appropriate tool, in the appropriate manner, in the appropriate way. How do you do that? It has to be by unilateral training."

If passed, Zwiener's HB 974 would require police departments to adopt a policy banning the use of less-lethal munitions no later than Jan. 1, 2024.
KEEP THE DALLAS OBSERVER FREE... Since we started the Dallas Observer, it has been defined as the free, independent voice of Dallas, and we'd like to keep it that way. With local media under siege, it's more important than ever for us to rally support behind funding our local journalism. You can help by participating in our "I Support" program, allowing us to keep offering readers access to our incisive coverage of local news, food and culture with no paywalls.
Make a one-time donation today for as little as $1.