Dallas police Chief U. Renee Hall (fourth from left) prays before the City Council discusses the newly released police staffing study. Stephen Young
The vibe coming from Dallas City Council on Monday morning as they were briefed on the long-awaited Dallas Police Department staffing study was recognizable to anyone who's ever disappointed someone with a Christmas gift. Council members appreciated what KPMG, one of the United States' biggest auditing firms, had done for them, sure. But they were less than blown away by the end product.


"It is too simple to say it is just a number." — Ian McPherson

Ian McPherson and Caoimhe Thornton, KPMG's two lambs to the City Hall slaughter, did their best to inoculate their $500,000 work product from criticism before the council got rolling.

"It is too simple to say it is just a number," McPherson said. "You're dealing with a very complex organization that's been built over many decades."

The problem, as McPherson and Thornton soon found out, is that many on the council wanted "just a number" — a magic hiring recommendation that would tell the city just how many officers it needs to add to DPD to make the department, and the city, whole again.

"We heard for a long time that this study was going to give us the number that we needed," council member Adam McGough said, questioning city staff. "Was there a certain time when either the scope or the focus shifted?"
click to enlarge 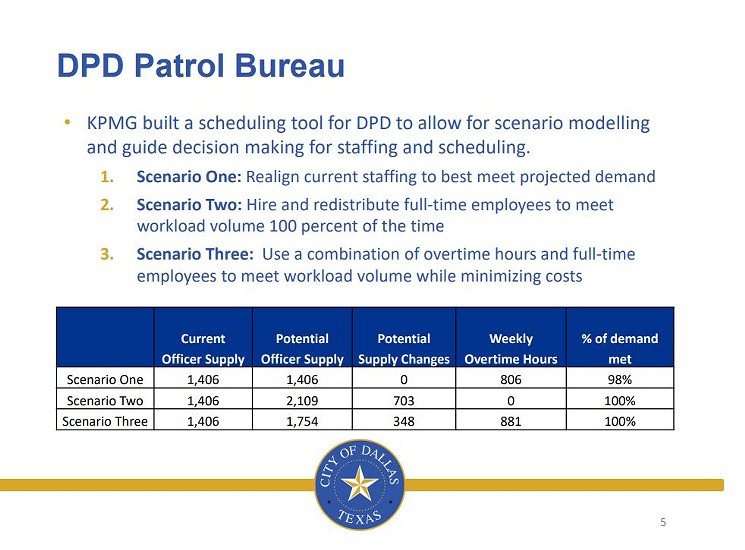 No one number, but here are three.
City of Dallas

Rather than a simple answer, KPMG presented three scenarios that could get the department close to its goal of responding to every Priority 1 911 call in under eight minutes. At current staffing levels, according to the report, the police department can leverage 806 weekly overtime hours and meet 98% of demand. It can hire 703 officers and meet 100% of demand without giving out any overtime work, or spread 881 overtime hours around and meet all of Dallas' demand by hiring 348 more officers.

It's just up to the City Council to decide what its priorities are.

According to the study, DPD, while it could certainly use more officers, doesn't properly use the ones already on its payroll. Around the city, officer shifts start and end at the same times, ignoring the realities of crime in the city. What's good for one Dallas police substation might not be good for another, McPherson and Thornton said. DPD also needs to modernize its data collection and analysis, according to the study, in addition to coming up with ways to address lower-priority calls that don't involve sending officers to the scene. Dallas police Chief U. Renee Hall (fourth from left) prays before the City Council discusses the newly released police staffing study.
Stephen Young
KPMG's conclusions led to a sharp exchange between North Dallas council member Cara Mendelsohn and Dallas Police Department Chief U. Renee Hall, who was back on the job for the first time since taking medical leave in July.

"What I read (in the report) describes a department in disarray," Mendelsohn said. "There's a lack of leadership  to address these issues, no structure in place to measure productivity."

Mendelsohn said she had to have a glass of wine while reading KPMG's findings.

Hall told Mendelsohn that she didn't drink, and then laid DPD's shortcomings at the feet of her predecessors.


“It is a confirmation of what we’ve assessed since Sept. 5, 2017, when I walked in the door understanding that there were some concerns. This is not all new information." — U. Renee Hall

“It is a confirmation of what we’ve assessed since Sept. 5, 2017, when I walked in the door understanding that there were some concerns. This is not all new information. When I look and see that KPMG says there's a lack of strategy, I don't read into it that the chief has no vision and the chief has no strategy and the command staff is in disarray,” she said.

While attrition has left DPD with about 2.6 officers per 1,000 residents, far short of the three officers per 1,000 ideal enshrined in a city ordinance, Thornton emphasized that per capita staffing requirements aren't the best way to staff a police department.

McPherson and Thornton told the City Council that KPMG's recommendations — with the help of a software tool created by the firm for DPD — could begin bearing fruit in as little as a year or take as long as three years to be fully in place, should the department and the city elect to run with them.
KEEP THE DALLAS OBSERVER FREE... Since we started the Dallas Observer, it has been defined as the free, independent voice of Dallas, and we'd like to keep it that way. With local media under siege, it's more important than ever for us to rally support behind funding our local journalism. You can help by participating in our "I Support" program, allowing us to keep offering readers access to our incisive coverage of local news, food and culture with no paywalls.
Make a one-time donation today for as little as $1.