Special programs took Dade Middle School in Dallas from the bottom level of school rankings to the top, but when the programs went away, so did Dade's high ranking. Stephanie Drenka
Show me a silver lining, I will find you a cloud. From 2014 to last year, the Dallas public school system became a state leader and role model for its ability to turn around failing schools. That’s the silver lining.

The cloud is what happened next. As soon as the Dallas Independent School District tried to taper off its expensive improvement program at certain schools, those campuses went straight down the tubes again.

The special improvement program was originally conceived as having a limited life. The district was supposed to be able to say, “OK, we fixed those schools. Now we can pull out and move the money to the next school in need.”

The lesson is that the district can’t stop fixing a troubled school. More to the point, it has to keep spending the money. The minute it stops, all of the same social and economic factors that dragged the school down in the first place will reach back in and grab it by the throat again.

The real-life experience was immediate and brutal. No school exemplified it more than Billy Earl Dade Middle School. Previously a poster child for dysfunction, during its three years under the school district’s ACE schools program, Dade turned at head-snapping speed, shot up in the rankings and became a statewide model for success. But last year, ACE support was withdrawn. It was an immediate debacle for Dade.

The backbone of ACE is a system that identifies the district’s top teachers and principals then pays them cash incentives above their regular salary to go teach in the worst schools, the ones most severely bitten by poverty, with the worst discipline problems and the highest teacher and principal turnovers. Those are the ones where nobody wants to go unless you pay them.

There is more to ACE than pay, including longer class hours and special resources. But the secret sauce is sending in the best teachers and the best principals. ACE has proved that the way to get the best is to pay for it.

In one year without ACE, Dade Middle School, which was a shining gem used to sell the Legislature on ACE, plummeted straight back to the bottom of district-wide rankings.

The percentage of Dallas teachers earning more than $70,000 is 65 times the percentage in Austin. The incentive pay to go teach in the toughest schools is an amount on top of those salaries.

Where does all that money come from? Well, here is where we find out why the teachers unions have fought so hard against the Dallas reforms. The old teacher pay system favored by the unions based almost all teacher pay strictly on seniority. The new "merit pay" system saves money at the low end by paying the least competent teachers less, then uses those savings to pay the highest-ranked teachers more.

But the results are clear, too. Since Dallas adopted its Teacher Excellence Index in 2014 to identify its best and worst teachers, the district’s students have chopped their own achievement gap in half. The district-wide student success rate on state achievement tests is now 6 percentage points under statewide levels as opposed to a 12-point gap in 2014.

The improvement at the ACE schools was even more dramatic than the strong district-wide showing — enough to deeply impress education leaders in the Legislature during its last session. They passed a new state law based on the ACE schools program in Dallas. 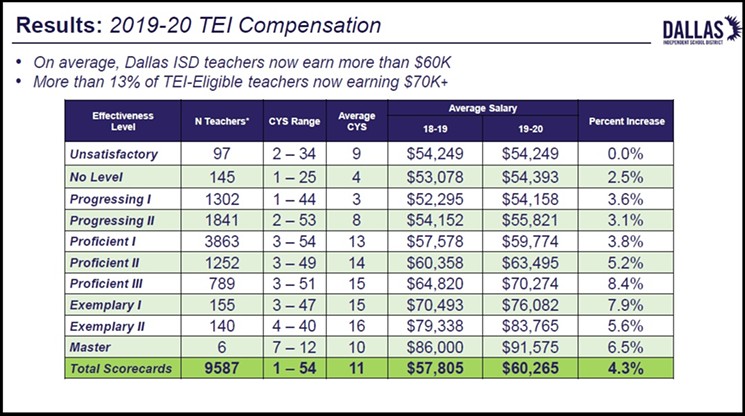 Under school reform, the old straight seniority pay system for teachers is out. Top teachers make much more, while the bottom-ranked ones make less.
disd.org
Todd Williams, CEO of Commit, a Dallas education nonprofit, was a major force selling legislators on the Dallas success story as was Mike Morath, now the state commissioner of education, previously a Dallas school board member during the 2012-2015 reform administration of former Dallas superintendent Mike Miles. The hope now is that this new state law, based on the success of the ACE program in Dallas, will reach back in and rescue the schools that cratered when Dallas took those schools off ACE support.


We should be enormously proud that our city has nurtured this success and these discoveries. We have learned something wonderful here about human nature and human potential.

In one year without ACE, Dade Middle School, which was a shining gem used to sell the Legislature on ACE, plummeted straight back to the bottom of district-wide rankings. Why? Well, it probably had to do with half the highly qualified teaching staff leaving when the district stopped paying them incentives to be there.

And why would they leave? Because teaching at Dade and other schools in very poor communities is hard, hard work. Those teachers earn that incentive money every day. Taking it away suddenly was a message of devaluation.

When the ACE supports went away for the 2018-2019 school year, Dade hit the skids. It joined two other former ACE success stories, Elisha M. Pease and Roger Q. Mills elementary schools, in falling back almost overnight to the bottom of district ratings.

I said if you showed me a silver lining I would find you a cloud, and I think I have. There is no one-time fix here. Nothing about this is easy. Turning schools around in the toughest socioeconomic environments will always be an ongoing task, a heavy lift and a long-term commitment. But what if we were to go back and take another look at that lining?

What all of this proves is really a wonderful thing, something bordering on a real-world, down and dirty, true grit miracle. The jury is in. ACE works. School reform works. With the reforms and special programs, tough schools soar. Take them away, and the schools collapse.

But there is also a much larger lesson to be drawn from the Dallas experience. We have shown in Dallas that any kid from any social background can be taught and maybe even become a high achiever, given the right conditions and resources at school. Isn’t that something close to being the answer to everything?

To see the miracle more clearly, maybe it would help to go back to the moral and intellectual insights that gave rise to it in the first place. A vision shared by all of the leadership in the school reform movement here has always been that every kid born to this world is capable of high achievement.

Dallas now ranks at the top of the state for highest teacher salaries.
disd.org
Another important aspect is the belief that it’s an excuse, a moral cop-out and simply not the truth to say that the only way we can help poor kids attain high levels of achievement is by ending poverty. Guess what? We don’t know how to end poverty. Handing people the help they desperately need is a mercy and the right thing to do, but it doesn’t seem to dent the overall cycle.

But we do know how to help poor kids do much better in school. And maybe that’s the way to end poverty. Someday we’ll know. In the meantime, doing better in school sure seems to open the way to a better life for those particular kids. What’s wrong with that?

We should be enormously proud that our city has nurtured this success and these discoveries. After all, this isn’t only about education. We have learned something wonderful here about human nature and human potential.

Why don’t you go ponder how great we are and what it is about Dallas in particular that made this all happen, because I kind of need to get on back down to the cloud department. I can only float up so high in the positivity levels before I start getting the bends.

The good news for Dallas this year is that the new state law looks as if it will provide a nice, fat stipend to the district, something between $20 and $30 million, that the district can use to put Dade and those other schools back on ACE support.

If they do, I’ll look for some ways in which they’re misspending the money. Nothing huge, just paper clips or something like that, you know, to keep my hand in.

And let me say something serious here at the end. For those kids at Dade, Pease and Mills, this bad year of decline was tragic. We have such a tiny window of opportunity into these lives. Our ability to help is so great. The costs of our failure are so terrible. Turning away from that window for even a moment is a monumental mistake. You want the real cloud? Once we know what we can do, we have no excuse for not getting it done.
KEEP THE DALLAS OBSERVER FREE... Since we started the Dallas Observer, it has been defined as the free, independent voice of Dallas, and we'd like to keep it that way. With local media under siege, it's more important than ever for us to rally support behind funding our local journalism. You can help by participating in our "I Support" program, allowing us to keep offering readers access to our incisive coverage of local news, food and culture with no paywalls.
Make a one-time donation today for as little as $1.