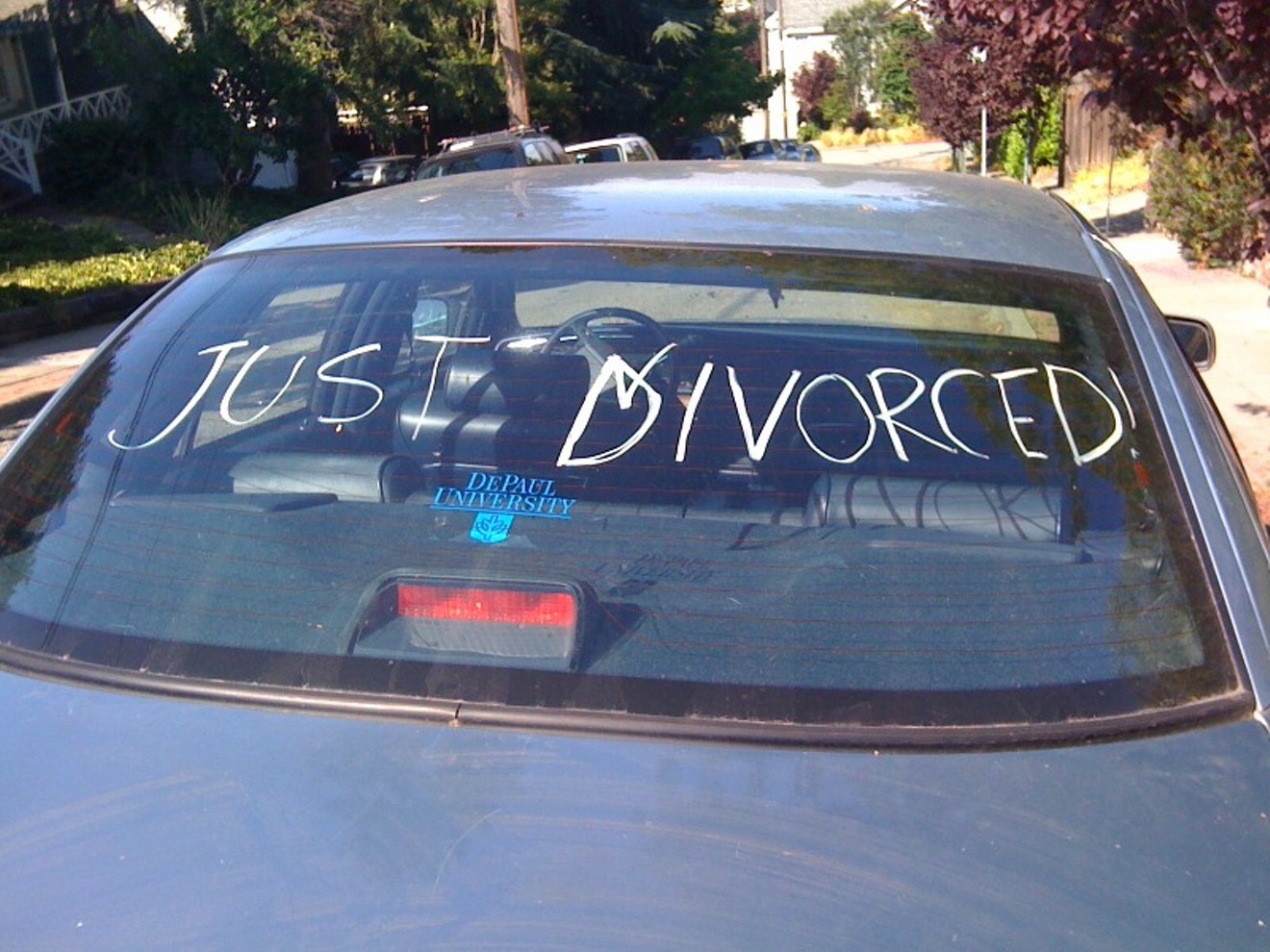 Best answer to Dallas' DART problem is a good, clean divorce by which the city frees itself of its suburban entanglements. Wikipedia
Sometimes somebody just rings the damn bell. Two young guys who are smart, one an analyst at the Manhattan Institute in New York and another an urban developer here in Dallas, co-wrote an op-ed piece recently that rang the bell loud and clear on DART, our regional transit agency.

The bottom line in their piece was that our regional light-rail system is a massive financial failure. We should be shocked by the way DART has wasted scarce public resources so far in its 37-year history. We should be frightened by what it will do in years ahead if it isn’t reined in and fundamentally reconstituted.

Rail comes down to how much it costs to build and operate and how many people use it. Nathaniel Barrett and Connor Harris report in their piece in the Fort Worth Star-Telegram that in the last quarter of 2018, the DART rail system attracted less than half what the Houston light-rail system did — 1,030 riders per mile of route length here versus 2,651 in Houston — and less than 60% of what the system in Phoenix gets.

The public costs of that inefficiency are truly staggering. The Orange Line to DFW International Airport has consistently performed below projections since it opened in 2014. Building and operating that line has cost us $600,000 per weekday rider, a fraction of which has been offset by fares.

They say in their piece:


Harris is in New York and an analyst at the Manhattan Institute, a conservative think tank. Barrett is an innovative urban developer here. When I spoke to them separately, both said an important lesson to be drawn from the history of DART so far: Build it, and they won’t come. Not enough of them.

“The ‘build it and they will come’ idea has not held out.” — Nathaniel Barrett

They said the sheer density needed for a rail system to make sense has to come from people who are already there, not people who may or may not show up later. Barrett told me one proof is that even when they do show up they often don’t use rail:

“The ‘build it and they will come’ idea has not held out," Barrett said. "I can give you the example of the Red Line station at the CityLine Development in Richardson.”

CityLine, which, of course, is not in the city, is a suburban mega-development that brags it offers “186 acres of restaurants, entertainment, beautifully landscaped plazas and parks.” It is home to a new 2 million-square-foot campus occupied by State Farm Insurance, built to house 8,000 to 10,000 employees.

Barrett told me: “Ridership at that station actually declined after the opening of the CityLine development with 10,000 State Farm employees.”

Who knows why? Maybe once the State Farm campus opened, all of the employees moved nearby and didn’t need to ride rail anymore. The point is that “build it and they will come” is from the movies. It’s not a principle on which anybody would ever bet this much private capital, which I like to call actual money.

Harris suggests people may not count money the same way when it’s public: “There is a sense in a lot of transportation planning that, if you build it, they will come, but a lot of this is, I think, people who don’t recognize how expensive public transit is to create, to build and run.

“A lot of people will support it just because they think it might be useful on occasion, and it’s always good to have more options. I think this line of thought motivated the recently built connection to (DFW) Airport, which by any measure is performing quite poorly.

“That’s not unique to Dallas, by the way. Basically every city that has ever built an airport rail connector has seen it underperform.”

None of what they have to say, by the way, is intended to be anti-rail or against mass transit. In their piece they say the Dallas region simply needs to get real about what rail and transit are for, where rail works, where buses are better and where none of it makes sense:

“It’s time for DFW transit agencies to stop expanding rail lines, consider closing low-performing existing lines, and use the money for better purposes. DFW should have better public transit, but this doesn’t mean spending billions on trains for a few rich suburbanites. DART is the longest light-rail system in the nation and among the least used.
Jim Schutze
By the way, there were people involved in the founding of DART all those years ago who predicted exactly the shortcomings that Barrett and Harris have found. Former Dallas Mayor Adlene Harrison, former Dallas City Council member Lee Simpson, developer John Tatum and engineer Tom Taylor, all early DART board members, fought hard to get DART to concentrate its resources and efforts on a dense downtown system.

That effort went nowhere. They were all kicked off the board. Note that DART still hasn’t even built the second connecting line through downtown that it has needed badly for decades to keep all of its far-flung, spaghetti-string, boondocks lines running on time. There has always been a reason for that, and those early DART board mavericks saw it plain as day. DART is a bad marriage.

Especially when DART was founded in the early 1980s but also even today, the region and the city have been controlled by the same small cabal of landholders. Two mayors of Dallas for most of the '80s were also the two biggest residential real estate developers in the northern suburbs. Today, one of the most influential developers in downtown, Ray Hunt, also is a major player in far north suburban Frisco.

DART was structured politically as a shotgun wedding in which the city was forced to marry 12 suburbs —  something even the Bible should have forbidden. Today 13 cities covering 700 square miles chip in $600 million a year in sales tax revenue, of which Dallas contributes more than half.

Somehow the logic of this wholly unnatural marriage becomes, “One for you, one for me.” If downtown gets a rail line, the suburbs deserve one, too. But actually it’s more like Dallas gets one, the suburbs get six.

Barrett points out that the mass transit needs of sparsely populated areas could be served more efficiently by buses than rail, but people in those areas probably don’t like buses for cultural reasons: “From the perspective of people who don’t really use public transit, rail is a more prestigious means of using public transit.”

In the long run, none of what is wrong with DART is ever going to get right by any means short of divorce, and that divorce will have meaning larger than more efficient mass transit. The city needs to free itself of its suburban entanglements because the culture, purpose and design of sprawl are antithetical to the culture, purpose and design of the city.

Especially when our single-most powerful issue is about to be global warming, we just have to wake up to certain realities. Sprawl is what’s wrong and not just in terms of engineering. Sprawl is morally wrong, because it’s what is going to kill us all.

Urban density is what’s right. It’s what works. It’s the only way we can achieve the great environmental efficiencies of scale required to right the ship in time. This isn’t just about lifestyle anymore. It’s about life.

I spoke with Tatum, one of the early banished mavericks. He reminded me of something that I think I had put entirely out of my mind so I could sleep: the badly needed second line downtown didn’t not get built all this time just because somebody forgot.

The suburban members have explicitly and consistently threatened to pull out of DART if it was built. They only have agreed to let DART build it now (when?) as part of a bargain by which they will get their latest and most crazily unneeded addition to the system, the Cotton Belt Line, which you might use if you needed to go harvest some cotton.

He made another point as well. The opportunity cost of not building a line is much greater downtown, where there is much more development and investment on the ground waiting to benefit from a rail line, than out in the boondocks. Out there if you don’t get the rail line you wanted for your land, you can just put those Herefords back on it.

Tatum agrees with me about the need for a divorce: “What’s best for the city of Dallas in the long run is to fix the mistakes that were made in the '80s when the suburbs first threatened to pull out. Dallas needs to do that. Pull out.

“Dallas needs to tell the suburbs to be happy with the system they designed and fought for and now they can go pay for it.”
KEEP THE DALLAS OBSERVER FREE... Since we started the Dallas Observer, it has been defined as the free, independent voice of Dallas, and we'd like to keep it that way. With local media under siege, it's more important than ever for us to rally support behind funding our local journalism. You can help by participating in our "I Support" program, allowing us to keep offering readers access to our incisive coverage of local news, food and culture with no paywalls.
Make a one-time donation today for as little as $1.