Suspected Dallas courthouse shooter Brian Clyde's magazines Brian Clyde via Facebook
Photos and videos from a Facebook page apparently belonging to Brian Isaack Clyde, the 22-year-old man identified by federal officials as the person who shot up downtown Dallas' Earle Cabell federal courthouse Monday, show the suspected shooter handling a rifle that looks similar to the one with which he was photographed Monday, bragging about owning high-capacity magazines and struggling to hold on to reality.

Clyde's Facebook page includes several photos in which a distinctive heart-shaped tattoo is visible on his left arm. The tattoo matches one described by The Dallas Morning News as having appeared in a photo of the suspected gunman.

Clyde died after a short shootout with federal law enforcement agents outside the courthouse. 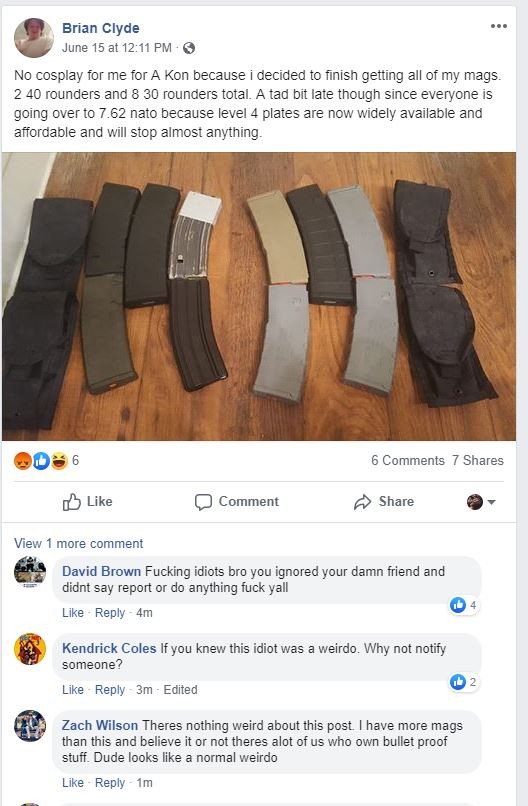 A cartoon from Brian Clyde's Facebook
Brian Clyde via Facebook
KEEP THE DALLAS OBSERVER FREE... Since we started the Dallas Observer, it has been defined as the free, independent voice of Dallas, and we'd like to keep it that way. With local media under siege, it's more important than ever for us to rally support behind funding our local journalism. You can help by participating in our "I Support" program, allowing us to keep offering readers access to our incisive coverage of local news, food and culture with no paywalls.
Make a one-time donation today for as little as $1.