Dallas residents affected by the upcoming sanitation services schedule and route change can expect to be contacted by the city starting next month. Cathy from USA, CC BY-SA 2.0, via Wikimedia Commons
When City Manager T.C. Broadnax’s job seemed like it was on the line in June, one complaint coming from the mayor, City Council members and residents stemmed from the dwindling quality of basic city services like trash and recycling collection.

As Broadnax works through a 100-day plan to get the city back on track, the Department of Sanitation Services is preparing to roll out changes that it hopes will improve the experience for residents and workers alike.

Under the current schedule, many residents often see delays in trash and recycling pickups, causing the junk to pile up outside their homes. And the employees with the department are stuck working 10-12 hour days.

It’s a problem that’s persisted for more than a year. In June last year, the number of complaints about recycling and trash collection skyrocketed to more than 27,000. City Council member Cara Mendelsohn said she still hears from residents about delays and missed pickups. She also hears about sanitation vehicles being out of service.

But all of that is due to change for the better on Dec. 5, says Director of Sanitation Services Jay Council.

Staffing and equipment shortages, as well as bad weather or other unpredicted circumstances, often cause the delays residents experience, Council said. As of now, the services are provided four days a week. When crews aren’t able to finish their routes, they have to make up for it on other days. After a while, the schedule can back up, leading the whole service to fall behind even further. In turn, that leads to longer workdays for the crews.

The upcoming changes aim to tackle both of these issues with five-day work weeks to shorten individual workdays, and more efficient routes that will affect over half of the city’s sanitation customers. Council, who has been on the job for a little more than a year, said the changes have been a long time coming.

“What we’re trying to do with this is improve work-life balance of our staff and make this a better operation for them.” – Jay Council, Department of Sanitation Services

“We haven’t done an update of our routing in over 10 years,” Council said, explaining that the routes simply haven’t kept up with the city’s growth. “As you grow, you have to update your routing to go along with that. So, this is long overdue.”

In a Sept. 9 memo, Assistant City Manager Carl Simpson explained the changes in detail to Mayor Eric Johnson and the rest of the City Council. The city says it will send more specific details to residents in the coming months.

“These route changes will allow for more efficient use of city equipment, will shorten the workday for sanitation crews, and will allow for maintenance on equipment to begin earlier each day,” the memo said.

They’ll do this by reducing the amount of times crews have to go to and from transfer stations, the landfill and their recovery facility. This should save on labor hours and fuel, while also reducing emissions in the city. Sanitation crews can expect to work eight hours a day instead of 10-12 when the changes are rolled out.

It’s a good thing too, Council said, because the harsh schedule and lack of working equipment are two of the main reasons the department loses employees. “We have a schedule that is very difficult to operate,” he added.

On top of making the service better for residents, Council said, “What we’re trying to do with this is improve work-life balance of our staff and make this a better operation for them.”

But change doesn’t always come easy, he said, and some with the department have already shared their concerns. Some crew members want to know if hours will be reduced, while others have concerns about potential layoffs. Council said he's tried to assure everyone that neither of these will happen.

As for residents, Council said some may have been on the same trash and recycling schedule for up to two decades. So, the new routes, which will impact 56% of customers, may take some getting used to at first, he said.

“The change that they will see is actual days of collection,” Council said. “There will be no reduction in the service being delivered; rather, it’s just a change in the actual day.”

Next month, the city will start sending out information to residents about the specific changes. This information will also be available online and through city staff by calling 311.
KEEP THE DALLAS OBSERVER FREE... Since we started the Dallas Observer, it has been defined as the free, independent voice of Dallas, and we'd like to keep it that way. With local media under siege, it's more important than ever for us to rally support behind funding our local journalism. You can help by participating in our "I Support" program, allowing us to keep offering readers access to our incisive coverage of local news, food and culture with no paywalls.
Make a one-time donation today for as little as $1. 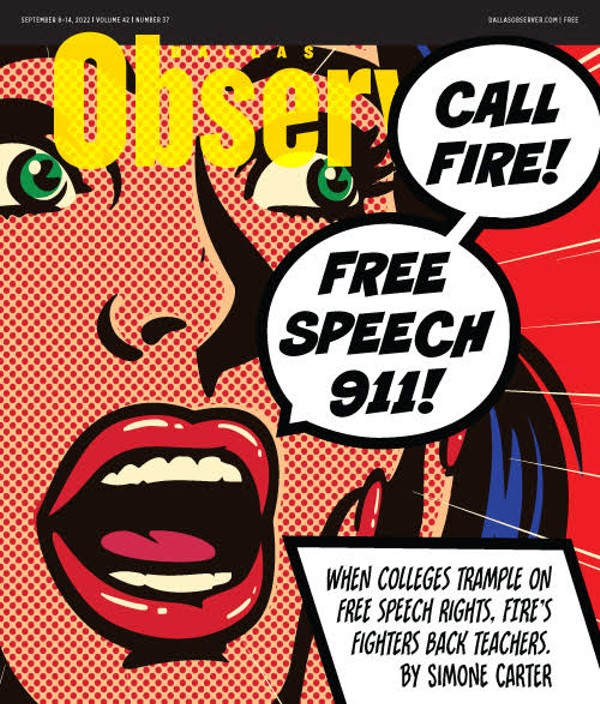