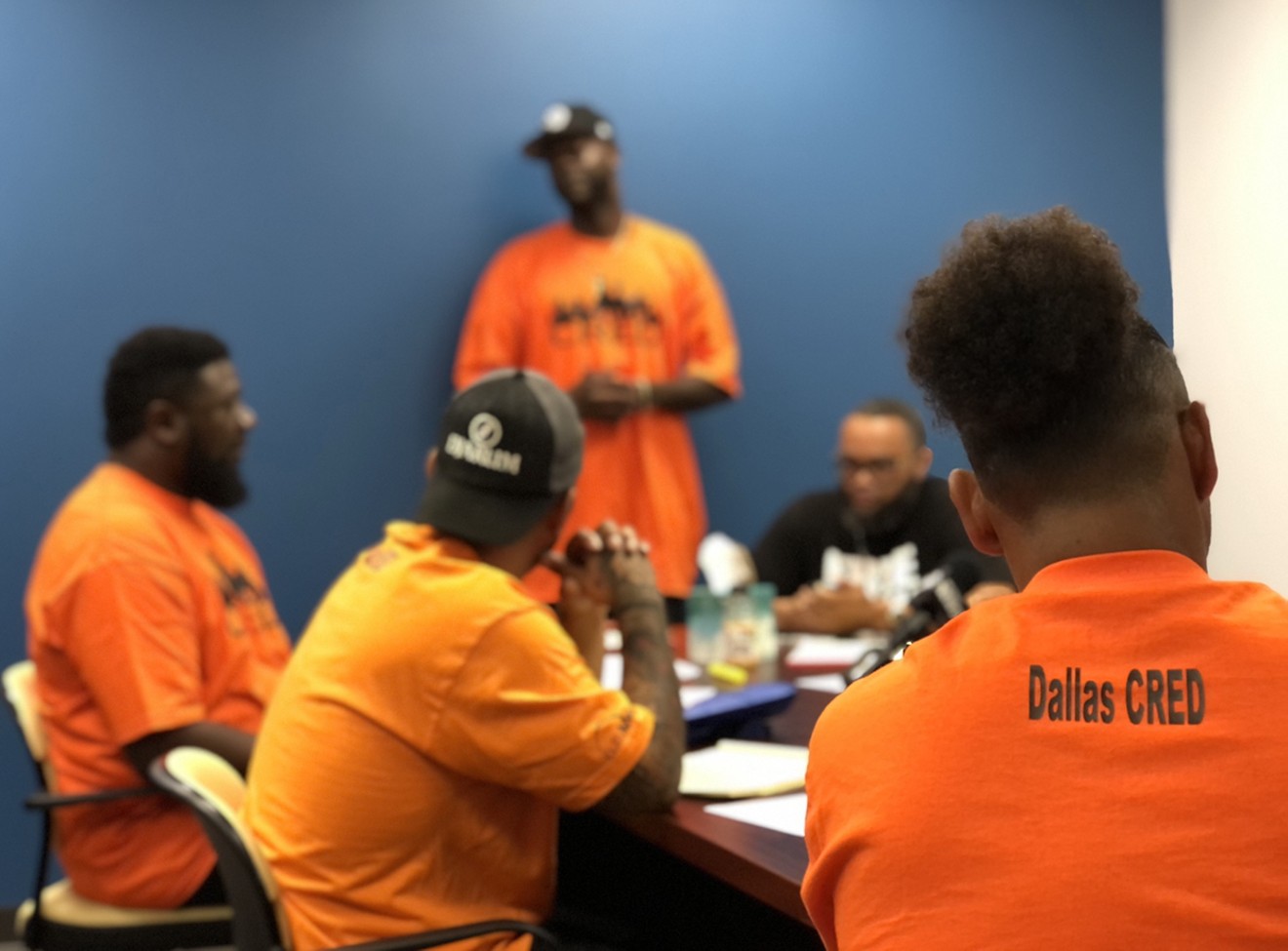 Dallas Cred is made up of people from the communities they serve, and many of them know the consequences of violence first hand. Jacob Vaughn
Every year, more than 600,000 people are released from prison back into society, and it’s not always easy for them to land a good job. Prisonpolicy.org estimates that the unemployment rate among ex-convicts in the U.S. is over 27%. That’s higher than the total unemployment rate in the U.S. at any time in history.

The Dallas Cred team is one group trying to help people getting out of prison land jobs with competitive pay. They're doing it with the help of the city and several other organizations in Dallas. “Cred” is short for credibility. Dallas Cred, which is an extension of the national nonprofit Youth Advocate Program, bills itself as a team of violence interrupters. They don’t intervene in actual violent situations, but they provide resources they say interrupt patterns that lead to violence. This could be anything from helping someone find their next meal to helping someone land their next job.

“By us being a violence interrupter team first of all, our whole entire job is to alleviate any disparities an individual may encounter that could cause them to want to turn to or enact violent behavior,” Mar Butler, Dallas Cred program director, said. “In order to do that, it requires building these relationships with other people who will tell us more about their story, get them to open up, and just let us know what the barriers are.”

One of those barriers is job placement.

“There are individuals who have been incarcerated for so long until they just could not get any real work,” Butler said. “The work is not competitive to the average cost of living when you’re over 40 years old and still working at the fast food restaurants and stuff like that.”

The group has been hosting job fairs and workshops where formerly incarcerated people can get connected with training and employers willing to give them a job. Earlier this month, Dallas Cred and several others hosted a day of workshops to provide people assistance with expungements, as well as teach them how to create a resumé and manage their finances. Two days later, they hosted a job fair that had on-the-spot interviews with “second chance” employers willing to offer them “careers not just jobs,” one flyer for the event said. Part-time and full-time jobs were available and transportation was provided. The events were also hosted and organized by the Dixon Circle Home Owners Association, the Dallas Parks and Recreation Department and Collective Activism.

Butler said they had nearly 200 people sign up for the job fair and workshops, but they’re still collecting information about how many of them landed job opportunities after their interviews. He said Dallas has the resources to help formerly incarcerated people, but everyone’s not always on the same page.

“What we do in Dallas a lot is we have resources and we have the answers to address the immediate needs, but because all of these entities and organizations don’t necessarily work together, they don’t work in concert, it’s hard for people to really find out what’s what and who’s who,” Butler said. Bringing the job fair to the community and getting everyone under the same roof seemed to make these resources easier to navigate, he said.

The city of Dallas also offers jobs to formerly incarcerated people through a program called FreshStart. Staff members with the FreshStart program were also at the job fair this month. In this program, city staff create a list of jobs needed across different departments that formerly incarcerated people can fill. Now, the city is looking to partner with more nonprofits for two new programs also meant to get ex-convicts employed. Without a good job, they may not be able to advance in life, Butler said, or they'll turn back to a life of crime.

“As long as we keep these individuals in survival mode, they’re constantly being forced to do something they really don’t want to do,” he said.
KEEP THE DALLAS OBSERVER FREE... Since we started the Dallas Observer, it has been defined as the free, independent voice of Dallas, and we'd like to keep it that way. With local media under siege, it's more important than ever for us to rally support behind funding our local journalism. You can help by participating in our "I Support" program, allowing us to keep offering readers access to our incisive coverage of local news, food and culture with no paywalls.
Make a one-time donation today for as little as $1.