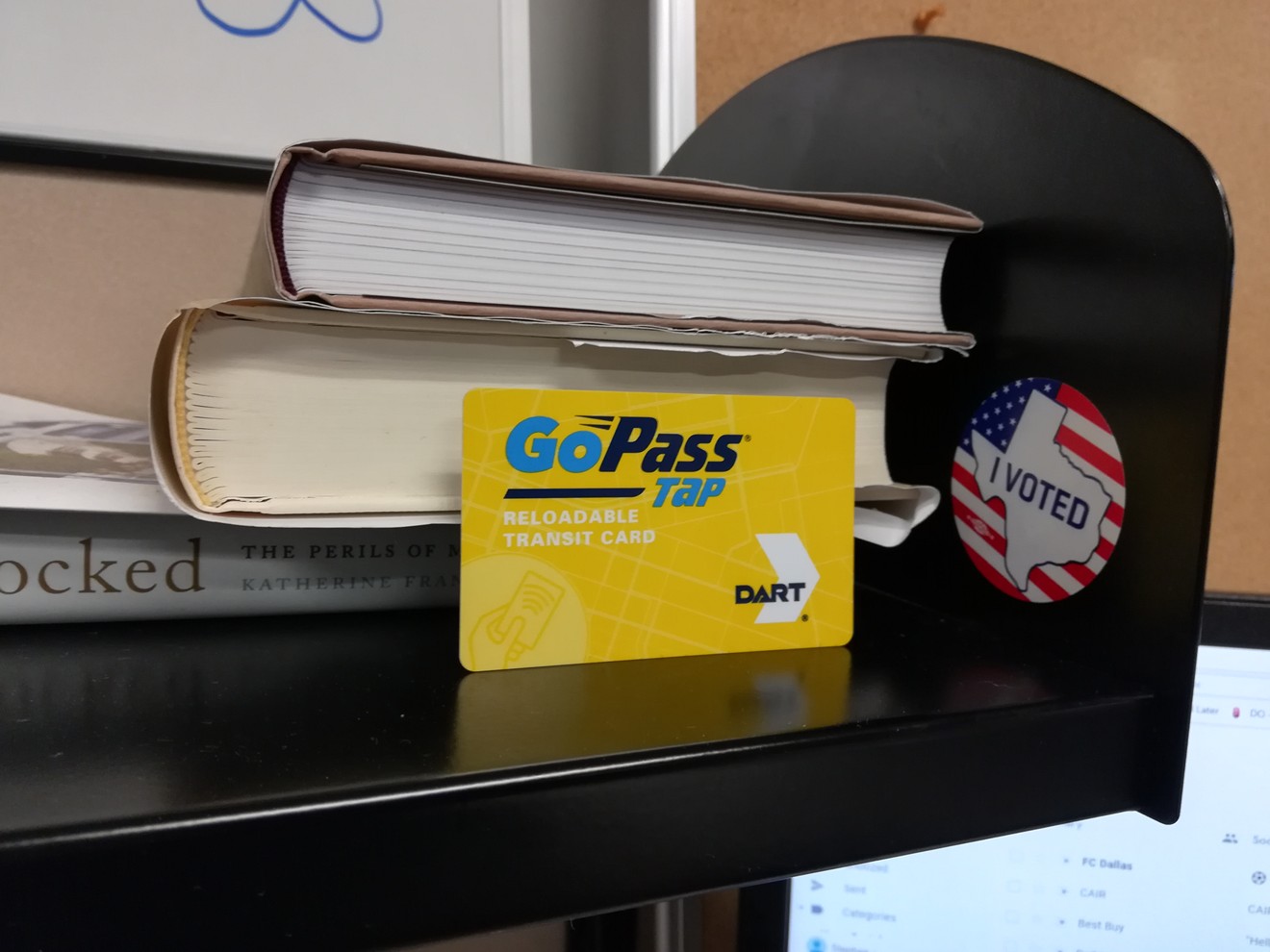 One of DART's new GoPass TAP contact-less payment cards. Stephen Young
Beginning Saturday, riding Dallas Area Rapid Transit is going to be a little bit more expensive. Day passes are going up $1, monthly passes are going up $16 and DART's two-hour pass is going away. The bump isn't all bad news, though, as the transit system is also set to begin capping daily and monthly fares for those using DART's new GoPass Tap contact-less payment cards or the GoPass smartphone app.

The transportation agency has to do so for a couple of reasons: First, thanks to state law, Texas municipal transportation providers are required to collect fares sufficient to ensure the provider can cover its expenses. In DART's case specifically, the agency also has to raise fares to keep up with its 20-year plan, which calls for increases in rider revenue of 17 percent every five years. A 20 percent increase covers the expected 3 percent dip in ridership along with the necessary 17 percent revenue bump, DART officials said last year when they first announced a potential fare increase.

Here's how DART's new structure will work when you hop on a bus or use a train-station ticket kiosk this weekend. If you're a cash customer, DART's bringing back its old single-ride bus ticket. That's $2.50 but doesn't come with any transfer privileges and isn't available on trains. Fifty cents more will get you a morning or evening pass, good until either noon or midnight.

A day pass is $6. Midday passes, previously available for $1.75 and good between 9:30 a.m. and 2:30 p.m., Monday through Friday, are now $2 but available seven days a week, good news for catching a Saturday matinee at the Angelika.


There's a real benefit baked into the new fare system for those who are willing to forgo cash, however.

There's a real benefit baked into the new fare system for those who are willing to forgo cash. Beginning Saturday for those with the GoPass Tap card and Sept. 1 for those with the GoPass app, fares paid will accumulate daily toward a daily pass and monthly toward a monthly pass.
When you board and tap your card, the minimum amount to get on the bus or train you're riding will be deducted from your GoPass balance. Accumulate $3 in fares during a morning or afternoon or $6 during a full day and that's all you'll pay that day. Accumulate $96 in fares paid during a month and ride free for the rest of the month.

GoPass Tap cards are available at DART's corporate store at Akard Station downtown, as well as retailers in the PayNearMe network. The cards can be registered and reloaded via credit or debit card online or reloaded with cash at retail locations.
KEEP THE DALLAS OBSERVER FREE... Since we started the Dallas Observer, it has been defined as the free, independent voice of Dallas, and we'd like to keep it that way. With local media under siege, it's more important than ever for us to rally support behind funding our local journalism. You can help by participating in our "I Support" program, allowing us to keep offering readers access to our incisive coverage of local news, food and culture with no paywalls.
Make a one-time donation today for as little as $1.