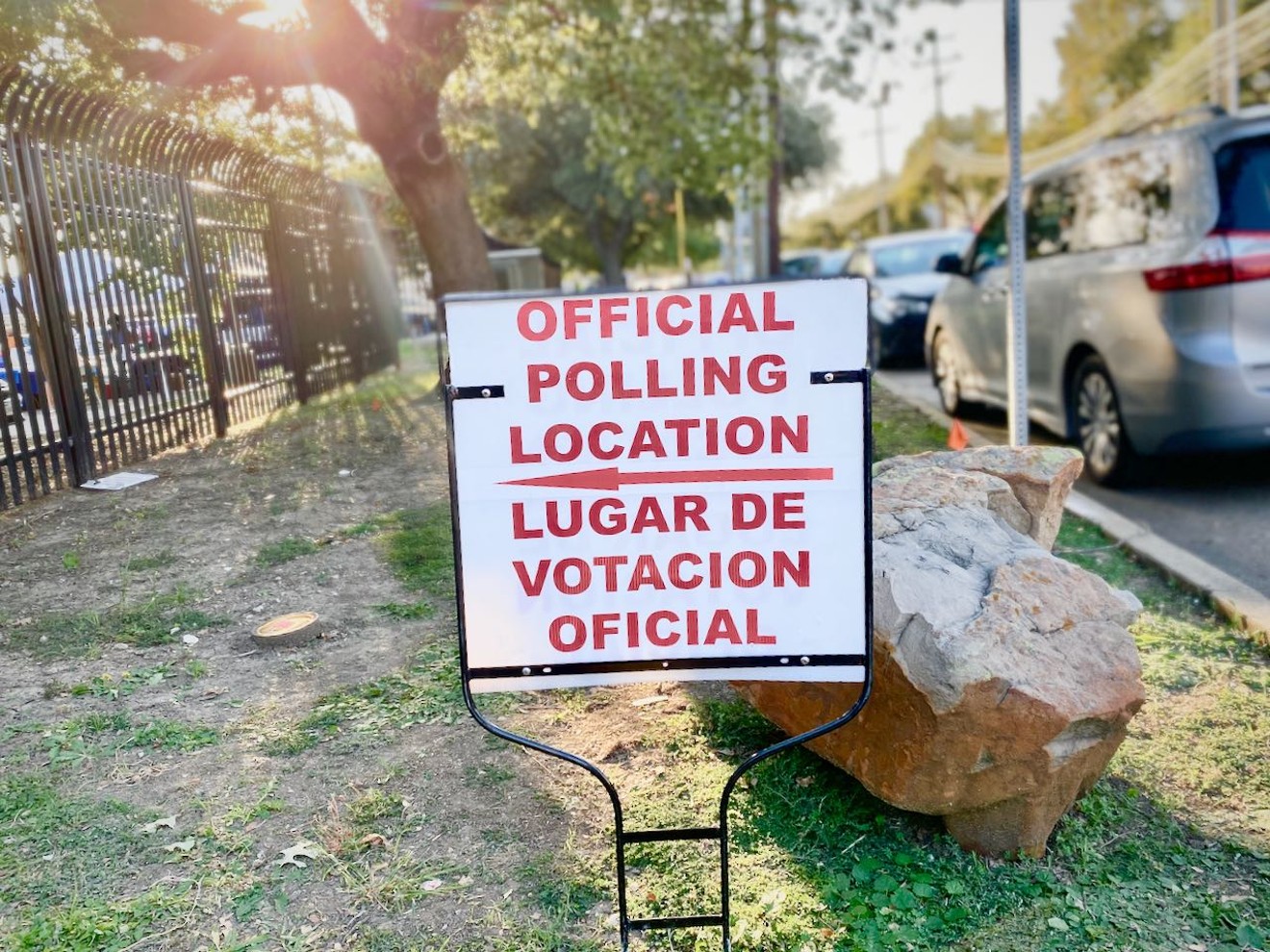 A metaphoric ray of light behind a polling location? Let's hope. Lauren Drewes Daniels
Editor's Note: This story was updated on April 6, 2021, to include responses from candidate Sery Kim.

The 2020 presidential election is in the rearview mirror, but North Texans in Arlington's congressional District 6 are gearing up to select their new representative.

After former U.S. Rep. Ron Wright died of COVID-19 in February, Gov. Greg Abbott set the special election for May 1. Twenty-three candidates jumped to file for the race, including 11 Republicans and 10 Democrats.

On Monday, Democrat Jana Lynne Sanchez’s campaign announced her first TV ad; the 30-second spot highlights the North Texan’s down-home roots. Although she later started a business "from scratch," Sanchez once worked at Dairy Queen and put herself through college.

Sanchez has garnered considerable support, no doubt in part because of her name recognition; she ran against Wright in 2018, losing by fewer than 8 percentage points.

Wright’s widow, Susan, is also seeking to fill her late husband’s seat with many eyeing her as the Republican frontrunner.

A March survey for Sanchez's campaign put Susan Wright at the top of the pack with 21% of support; Sanchez came in a close second with 17%. It's an open election, so the top-two vote-getters regardless of party affiliation will face one another in a runoff election if no one wins 50% of the vote.

Not every candidate has deep Texas roots. Former professional wrestler Dan Rodimer threw his hat in the ring after he lost a congressional bid in Nevada last year. While he billed himself as a suburban family man in that campaign, Rodimer tried a different angle this time around.

Some on Twitter were critical of the ad, especially given that Rodimer only recently moved to the state.

“'nancy pelosi’ got rid of you in 5 seconds and then you stepped in literal sh*t not sure this ad conveys the message you're intending, big guy,” wrote user @samdman95.

not sure this ad conveys the message you're intending, big guy

Rodimer’s campaign did not reply to our interview request.

"I know what that’s like — to live in the margins and to feel that my cries go unheard.” – Democratic candidate Shawn Lassiter

Rodimer isn’t the only Republican making waves. Candidate Sery Kim upset many last week when she declared that she doesn’t want Chinese immigrants to come to the United States.

Kim previously served under former President Donald Trump in the Small Business Administration, and her remarks came at a time when anti-Asian American hate crimes are on the rise.

“They steal our intellectual property, they give us coronavirus, they don’t hold themselves accountable,” Kim said at an Arlington GOP forum, adding, “And quite frankly, I can say that because I’m Korean.”

Afterward, the DFW Asian-American Citizens Council condemned Kim’s remarks, and two prominent California lawmakers pulled their support for her, according to The Texas Tribune. She then doubled down, accusing the liberal media of manufacturing the controversy.

Speaking to the Observer, Kim insisted her comments were taken out of context. An Asian immigrant herself, she said she was “very clearly talking about the Chinese Communist Party” and would welcome any person fleeing that regime.

Kim said she was inspired to run for congressional District 6 because her parents worked as janitors in Arlington so that she could excel in life. Lately, Kim has seen what she describes as “socialist Democrat policies” stripping the rights of the working poor to live and fulfill the American dream.

While the working poor never had the choice to stay home during the pandemic, Washington politicians simply "didn't care," Kim said.

"I would the make the best candidate for Texas 6 because I am the embodiment of the American dream that everyone here has sacrificed so much for, and I will fight for the continuation of that,” she said.

Lydia Bean is also a leading liberal candidate, and she quickly decried Kim’s remarks regarding Chinese Americans as racist. Plus, she took it personally; Bean’s husband and in-laws are Chinese American, as is her 10-month-old son.

Last week, Bean was endorsed by the Texas AFL-CIO union and is the only Democrat to earn a statewide endorsement. A small business owner, Bean criticized the governor for making business owners implement mask mandates themselves, creating conflict statewide.

Bean ran for state Legislature in 2020 against Fort Worth state Rep. Matt Krause. Although she lost by 9 percentage points, she was able to raise $1 million in her state House race.

The district is moving quickly in Democrats’ direction, Bean said; while Trump carried it by 12 points in 2016, he won by 3 in the last election. That momentum will help to flip the seat in May, she predicted.

Republicans in this race are extreme, she said, and the stakes are high.

“It’s very important we fight this fight because we’ve lost a lot in the last four years,” Bean said. “And the people running want to continue that failed, divisive politics into the future, and we can’t allow that to happen.”

Yet another Democrat has raised over $250,000 and attracted more than 4,250 donors since she announced her campaign in February: Shawn Lassiter. An educator and nonprofit leader, Lassiter earned endorsements from former Dallas ISD Board President Miguel Solis and 2020 Tarrant County sheriff candidate Vance Keyes.

An ad released in February in which Lassiter sits in the dark amid Winter Storm Uri also caught the attention of actor and comedian Patton Oswalt, who promoted her campaign on Twitter.


Love this ad and love this candidate. Donate if you can! #ShawnLassiter #TX06 https://t.co/3lFEQhpBOR

Lassiter is focused on getting Texans back to work, safeguarding voting rights and improving access to health care. And while the winter storm is a distant memory to some Texans, many were displaced, she said.

Rather than restricting people’s voting rights, as some conservative state legislators are attempting, Lassiter said politicians need to commit to helping families in need.

“That’s my goal. [It] is to focus on those families and to make sure that their stories are being heard loud and clear, that I’m fighting for them,” she said. “Because I know what that’s like — to live in the margins and to feel that my cries go unheard.”
KEEP THE DALLAS OBSERVER FREE... Since we started the Dallas Observer, it has been defined as the free, independent voice of Dallas, and we'd like to keep it that way. With local media under siege, it's more important than ever for us to rally support behind funding our local journalism. You can help by participating in our "I Support" program, allowing us to keep offering readers access to our incisive coverage of local news, food and culture with no paywalls.
Make a one-time donation today for as little as $1.