A bison thigh bone and a tooth from a woolly mammoth are the first of their kind found at the airport. Officials aren't disclosing where they were discovered "in the interest of safety for our customers and the property itself," the airport said Tuesday on Facebook.

During the initial construction of the airport in the '60's, workers building one of the terminals discovered a prehistoric plesiosaur fossil. The 25-foot relic was on display at the airport for decades before being removed sometime during the 21st century.

Hi, Larry - this was on display at Terminal C but has since been removed. The fossils were found while building Terminal B (2W) in the 60's. pic.twitter.com/aJqQ6ctZfP


The fossils discovered this month will be taken to SMU for safekeeping and research, according to the airport.
click to enlarge 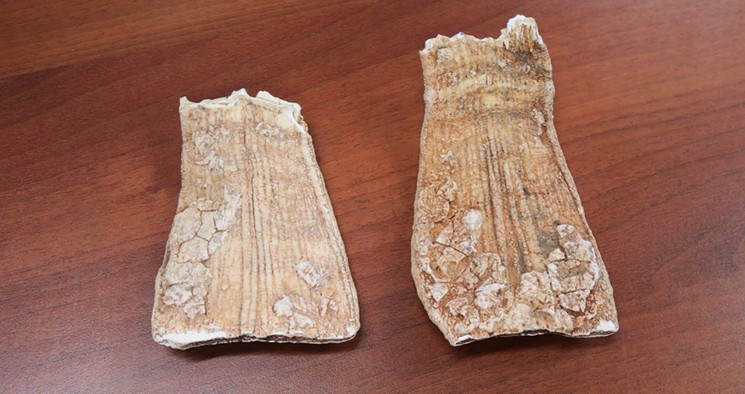 To paraphrase the best joke from the airport's thread about the fossils, it isn't clear whether the bison and mammoth to which the bones initially belonged were waiting for lost baggage or a canceled flight.
KEEP THE DALLAS OBSERVER FREE... Since we started the Dallas Observer, it has been defined as the free, independent voice of Dallas, and we'd like to keep it that way. With local media under siege, it's more important than ever for us to rally support behind funding our local journalism. You can help by participating in our "I Support" program, allowing us to keep offering readers access to our incisive coverage of local news, food and culture with no paywalls.
Make a one-time donation today for as little as $1.