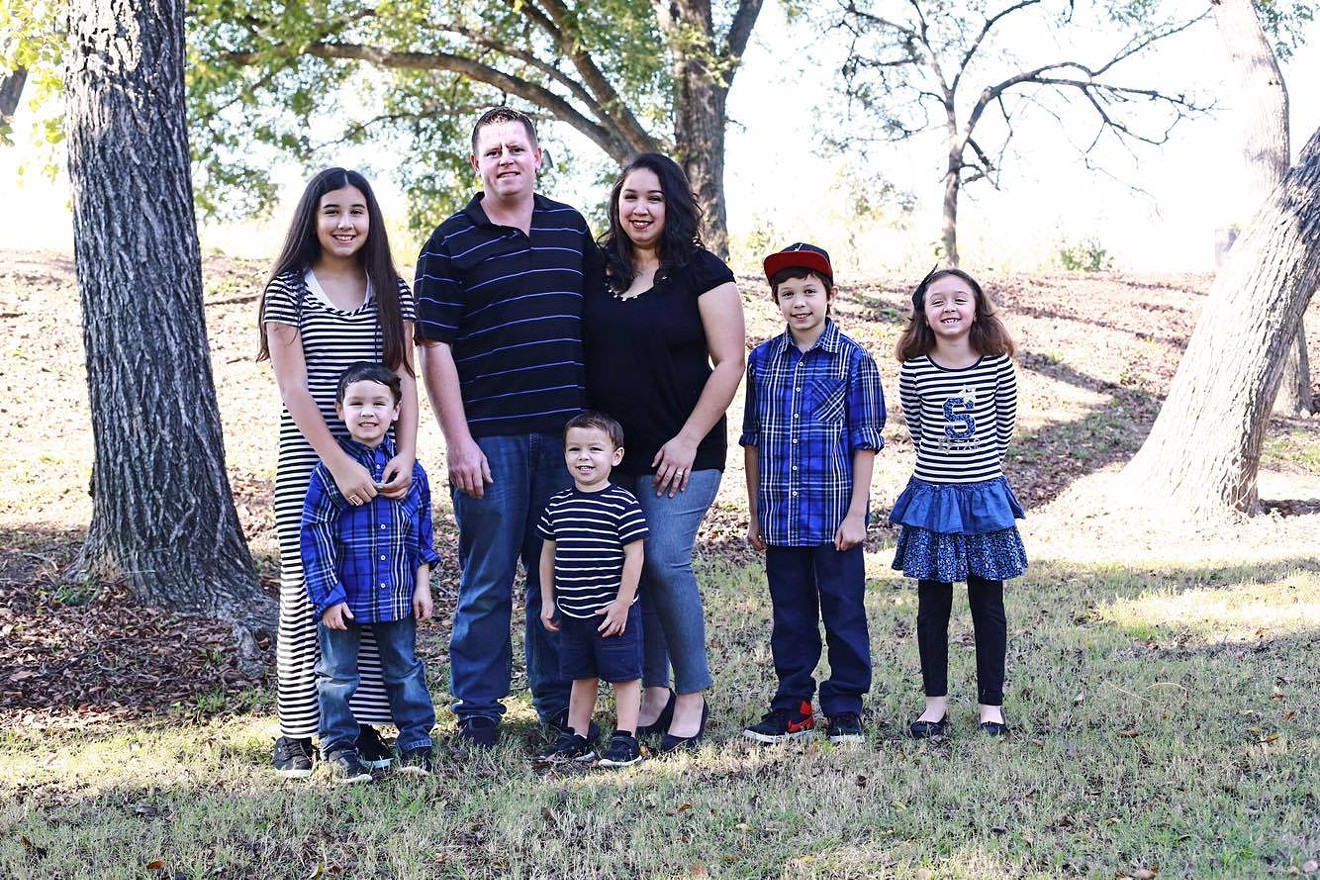 Courtesy of the Tuckers

A 32-year-old mother of five kids faces a felony child endangerment charge for testing positive for marijuana use while breast-feeding. Erica Tucker says she was using cannabis to control her grand mal epileptic seizures after she could no longer afford her prescription drugs. If convicted she could face up to two years in jail and a $10,000 fine.

A former Bible school teacher, Tucker was arrested in August 2016 after she tested positive for marijuana in a hospital emergency room in March 2016. She’d been rushed to the hospital by ambulance after suffering her third grand mal seizure. Once she tested positive, the nurse asked her if she was breast-feeding her newborn child, and she told her yes. The nurse immediately called Child Protective Services.

“I was still nursing my youngest son and had no idea it would transfer,” Tucker says.

They also had no idea how touchy Johnson County would be. On Friday, prosecutors withdrew a plea offer of six months in jail, six months at an in-house rehab facility, three months at a halfway house and five years probation after their story appeared on WFAA on Thursday evening. Their attorney, Daren Van Slyke, also withdrew from the case because they had gone public.

“Our attorney spoke with the DA, and he was very upset that the media was brought into this and made public,” Tucker says. “But we can do this fight. We’re here to fight.”

The felony charge comes at a time when Texas legislators are preparing to debate several medical marijuana bills in Austin. One bill authored by Sen. Jose Menedez seeks to expand the Compassionate Care Use Act to include the 1.7 million Texans with chronic pain, post-traumatic stress disorder, epilepsy and other disorders many believe could be alleviated by marijuana without the sometimes debilitating side effects of legal drugs.

Tucker, who home-schools her children, says she first began experiencing grand mal seizures in December 2014. It was close to Christmas when her 32-year-old husband, Greg, says he walked into the bedroom and found her on the floor, convulsing and biting her tongue. She says she was later diagnosed with epilepsy, an incurable neurological disorder. They couldn’t afford health insurance, and Tucker says she was unable to afford the monthly $325 for prescription medication. A former oil field worker, her husband now works as a surveyor for a construction company, earning about $30,000 a year to support their large family. She started researching alternative medicines for epilepsy and learned about the health benefits many patients claim they receive from using marijuana.

Though some people with epilepsy say marijuana helps control seizures, as is the case with many of the medical claims concerning cannabis, scientific research into its effectiveness has been hampered by federal law, which sees no possible benefit to the drug. Research into marijuana’s effect on lactating mothers and infants is also scant, but the general medical consensus is that breast-feeding mothers should abstain. Thomas W. Hale, a clinical pharmacologist at Texas Tech who specializes in drug exposure during pregnancy and breast-feeding, argues in his book Medications and Mothers’ Milk:


The American Academy of Pediatrics also warns against the use of marijuana while breast-feeding because the drug may affect brain development in the infant. In a 2009 study published by the Journal of Toxicology, researchers claim, “Because the important phase of brain growth occurs during the baby’s first months of life, THC could theoretically alter brain cells metabolism.”

The key word there is “theoretically.” Hale’s critics suggest that his claim of “high risk” and “significant damage” grossly overstate what little data researchers have uncovered because of the limits on the number and size of the studies and their sometimes contradictory conclusions. “Cannabinoid exposure through milk has not been shown to increase neonatal risk, but there are no appropriate studies of this. ... Despite abundant recreational use of cannabinoids by women of reproductive age, very little is known about marijuana use and lactation,” states a 2005 article in Can Fam Physician, summing up the current state of ignorance.

Tucker says she began smoking marijuana two to three times a day to combat her seizures because they had gotten so bad that she had to leave her job as a Bible school teacher at Turning Point Church in Fort Worth, where she worked for seven years. Marijuana helped, she says, but she still found herself heading to the emergency room on two different occasions. The last time she experienced a grand mal seizure in March 2016, she nearly bit off her tongue. Her husband called 911, and she was rushed to the hospital in Burleson, a suburb south of Fort Worth, then lost custody of her five children for five months after the ER nurse followed hospital protocol and called Child Protective Services because of Tucker’s marijuana use.

“I am not a bad person and don’t neglect our children, so we were just stunned and crushed,” she says.

A CPS investigator removed the kids from her home and gave them to her parents, who would later receive temporary custody for several months. A hair follicle test was conducted on each of her children, she says, and her infant son tested “slightly positive” for cannabinoids. Her husband was also tested and showed signs of marijuana use. He used it to help chronic pain, though Tucker points out that he only smoked it at night before bed.

Neither she nor husband smoke marijuana any longer. Instead she says she is forced to take levetiracetam to control her seizures, a prescription pill that, according to Drugs.com, may cause drowsiness or dizziness; behavior changes and mental or mood problems; risk of suicidal thoughts or attempts; serious skin reactions like swollen, blistered or peeling skin; cough, decreased appetite, diarrhea; headaches, irritability, nausea; nose or throat irritation, stomach pain, stuffy nose; tiredness, trouble sleeping, vomiting and weakness; dark urine, decreased coordination, fever, chills; persistent sore throat, hallucinations, memory loss; muscle or neck pain, new or worsening seizures; pain and itching, unusual bruising or bleeding, vision changes and yellowing of the skin or eyes. (This isn’t even the complete list of potential side effects. Drugs.com recommends contacting a health care provider for other side effects.)

CPS closed the case against them in August 2016 and turned it over to a Burleson police detective, who charged Tucker and her husband with child endangerment. The alleged crime occurred in a county with a district attorney, Dale Hanna, who is known to be hard on drug crimes regardless of the circumstances. Hanna has served seven consecutive terms as Johnson County district attorney and also serves as district attorney of Somersville County. Former Johnson County Sheriff Bob Alford told the Fort Worth Weekly in 2005, “It’s a tough county, no question about it. It’s tougher than most when it comes to prosecution of crime.”

Tucker says that the detective did some work with them when it came to their arrest. He gave them the heads up when he planned to issue the warrant, allowing them to gather the money to do what she called a “walk through” and bond quickly out of jail. He also told them that their bond would be $5,000 instead of $10,000.

She says that she thought they had been told they would have 10 days to gather the money but found out six days later the warrant had been issued. She spent the remaining four days at various parks around Burleson with her children in hopes that she and her husband wouldn’t be arrested before they were able to raise the money for their bond.

“I was at that park all day long until we had the money,” she says. “And that was an awful time. It was horrific.”

Tucker started an online campaign to raise awareness and money to pay for their legal fees, which got attention from the media and led to the plea offer being withdrawn.

David Sloane, a Fort Worth criminal attorney who specializes in marijuana law, says the charges facing the Tuckers are not rare. While he couldn’t comment on their case specifically, he has represented other parents who have faced child endangerment charges after being nabbed for marijuana possession.

“It wouldn’t surprise me if there were dozens of cases within a hundred miles of DFW,” says Sloane, a board member of DFW NORML, whose practice takes him across the state defending people charged with cannabis violations.

For prosecutors, the challenge is persuading jurors that a parent has endangered their child simply by possessing marijuana for their own adult use, particularly now, as support for cannabis as a medicine has grown and its hoary reputation as a demon weed has faded.

“I think prosecutors are going to come up extremely short proving the danger element,” Sloane says. Twenty-eight states allow cannabis for use, Sloane point outs. “Where are all these dead babies?”

Of course, whatever the odds are that someone might beat a child endangerment charge doesn’t change the fact that facing one is a risky, expensive proposition. Public attitudes toward marijuana may be changing, but that’s cold comfort for people who come to the attention of law enforcement. And marijuana use can be a massive legal headache outside the criminal courts, too, Sloane points out. It also pops up frequently in family courts, in cases where parents go to battle over child custody.

“A lot of people think it’s legal now, but it’s not,” Sloane says. “It’s a problem when the laws are not in step with the rest of society.”

That’s a hard fact the Tuckers have learned.

“No family should be ripped apart because of a natural medicine that is being legalized all over the country,” Tucker says.