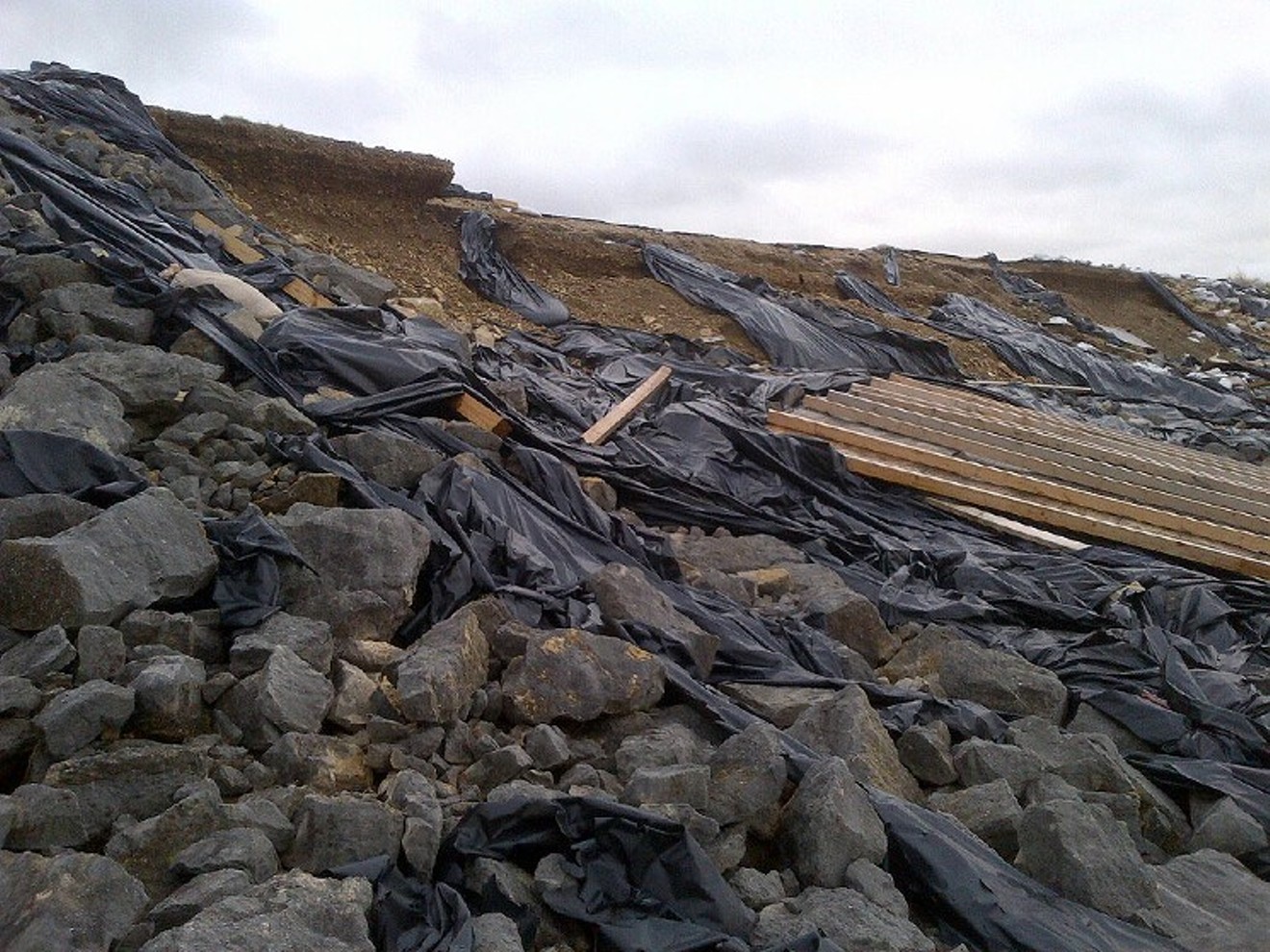 That’s the lesson homeowners are about to learn in Arlington. Prestonwood Lake, about 3.5 surface acres and 1-5 feet deep, lies behind a dirt dam built by a developer in 1978. The city of Arlington has been telling residents two very important things about the dam in recent weeks.

It’s about to blow. And it’s their responsibility.

The people who built the dam, long gone, stuck the responsibility for it on the books of a homeowner’s association, also long gone. Arlington officials have been telling people who live next to the lake that the city only knows one thing for sure about who’s on the hook when the dam blows: not the city.

How do things like this get worked out in Texas? Let’s you and me guess.


Federal standards say a risk of one death from a dam failure on a federally controlled waterway is too much. The standard in Texas is six.

In 2016 Tyler County in deep East Texas got hit with 14 inches of rain on one May afternoon, jumping up the water level in two small lakes, Amanda and Frog Pond, by several feet. When the dam at Amanda blew out, nobody died, but 165 families with property near the lakes discovered it was their job to fix things.

Easy. All they had to do was form a water control and improvement district under Texas law and borrow a million and a half dollars. Something like that happens, and all of a sudden that premium you paid to be near a man-made lake starts to look a lot more expensive.

Arlington is telling people near Prestonwood Lake that even a dam blowout won’t hurt anybody’s property or threaten lives. It would be interesting to see more detail on how they know that.

A 2017 investigation of dam safety in Texas by Ralph K.M. Haurwitz in the Austin American-Statesman, updated last September, revealed a truly frightening narrative about dams in Texas: The Legislature has devoted most of its efforts on dam safety in recent years to making sure small dams in Texas will not have to meet federal safety standards.

Dams that would kill only six people if they fail are allowed to meet lighter safety standards in Texas than dams that would kill seven or more. But even that was too tight for Texas. As Haurwitz reports, in 2013 the Legislature passed a special law exempting 45 percent of the dams in the state from any and all inspection or safety requirements, including 231 dams that are in the up-to-six-deaths category. Because, you know, we just need less dam safety in Texas. 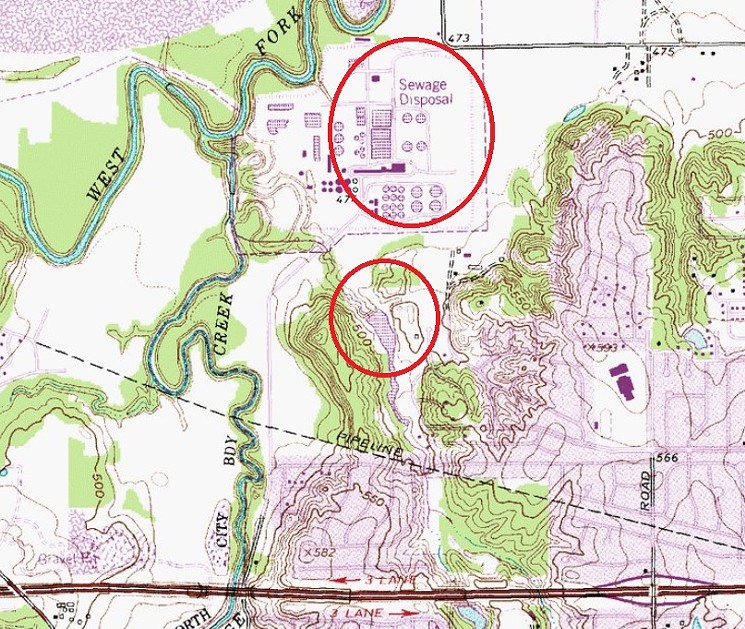 The smaller red circle indicates Lake Prestonwood. The larger circle above it is the Village Creek Wastewater Treatment Plant.
Topoquest
Arlington has been telling the folks with homes around Prestonwood Lake that even if the dam does blow, which the city says it probably will fairly soon, the resulting flood will only jam up some culverts and maybe slow down traffic on nearby Northwest Green Oaks Boulevard. And, indeed, a glance at a topographic map does indicate the divided six-lane thoroughfare with a median is directly in the path of an outflow from the small lake.

But just beyond the boulevard is the Village Creek Wastewater Treatment Plant, capable of pumping 166 million gallons a day of treated effluent into the Trinity River. The huge treatment plant is fortified by its own massive dirt levees, so maybe Arlington officials aren’t worried by an attack of water from a punky little lake like Prestonwood.


When we came up with the idea for dams, do we think nature slapped her forehead and said, “Dam! Why didn’t I think of that?”

But there it is, the punky lake, kind of pointed like a rifle right at the treatment plant, and when things get crazy with water, things get crazy. Maybe everybody in Arlington needs to know some more detail on the contingency planning here, not just the people near Lake Prestonwood.

Prestonwood dam and small private dams like it are the retail version of a wholesale threat posed by aging water impoundments in Texas. Three years ago in “The Dam Called Trouble,” a special investigative report, University of North Texas journalism professor George Getschow exposed the almost unimaginable urban catastrophe that will ensue in Dallas if there is a failure of the aging dam at the immense, federally constructed Lake Lewisville reservoir between Dallas and Fort Worth.

It’s kind of nuclear in scale — not something anybody wants to think about, so, for the most part, nobody does. But with climate change and violent weather battering us ever more ferociously on all sides, these small dam issues like Prestonwood are canaries in our coal mine.

Years ago former Dallas Mayor Adlene Harrison told me a story from her earlier tenure as a presidential appointee to the regional  EPA under President Jimmy Carter. Harrison had always heard boosters in Dallas talking about how we needed to build a big lake on the Trinity River downtown so we could be like Austin or Boston or somebody. So when Carter appointed her to the regional division of the EPA, she asked some EPA engineers about it.

They told her it was a terrible idea. They had specific engineering arguments for why — wrong kind of river, wrong kind of soil, wrong kind of weather, won’t last, will fill with silt and become a huge liability.

But after I heard her story, I found myself pondering another possible explanation for why maybe creating a vast lake in the middle of the city might not be a great idea. If we look around the region, do we see any places where nature created vast lakes? Or any lakes? Even little ones?

Do we suppose it just didn’t occur to nature? Was nature busy? We don’t want to suggest that nature was lazy or not smart enough, I’m sure, but when we came up with the idea for dams, do we think nature slapped her forehead and said, “Dam! Why didn’t I think of that?”

In other words, as the engineers were explaining to Harrison those many years ago, maybe nature had her reasons for not putting lakes here. And maybe we’re about to find out what those reasons were.
KEEP THE DALLAS OBSERVER FREE... Since we started the Dallas Observer, it has been defined as the free, independent voice of Dallas, and we'd like to keep it that way. With local media under siege, it's more important than ever for us to rally support behind funding our local journalism. You can help by participating in our "I Support" program, allowing us to keep offering readers access to our incisive coverage of local news, food and culture with no paywalls.
Make a one-time donation today for as little as $1.