Operation DisrupTor includes the Department of Justice, the FBI, the U.S. Drug Enforcement Administration, and several other agencies across the country. U.S. Department of Justice
Starting in June 2019, Aaron Brewer, 39, spent months inside a Dallas apartment packaging up drugs to ship around North Texas and across the country. It’s how he made his living and paid the mortgage on his house in Plano. But one day, the feds came knocking on his apartment door and shut him down.

Brewer didn’t fight the charges against him. He pleaded guilty in December to conspiracy to possessing a controlled substance with intent to distribute. He’s currently serving a 78-month sentence in federal prison and was ordered to forfeit $50,000 in drug proceeds.

He admitted in court to creating dark web market vendor accounts to sell cocaine, heroin and other drugs online. Customers would pay in cryptocurrency (often Bitcoin), and Brewer used aliases for shipments, sending them through the U.S. Mail and other services.

Brewer wasn’t always like this. If you looked at his past, you might not expect a guy like him to get caught up in a cross country drug dealing operation.

Between 2005 and 2010, he served in the U.S. Navy, eventually being deployed to combat zones in Afghanistan. He would help operate radar systems to warn soldiers when rocket and mortar attacks were coming. Brewer was honorably discharged in 2010. He received ribbons and medals, among other accolades, for his time in the military.

"... There will be no safe haven for drug dealing in cyberspace.” – Deputy Attorney General Jeffrey Rosen

But he left with more than a clean service record. After the Navy, he struggled with impaired hearing, limited motion of his jaw, migraine headaches, clavicle impairment, asthma and vertical strain. Ailments or not, he still returned to Afghanistan for 18 months in 2011 as a contractor for Counter Rocket Artillery Mortar, or CRAM, to help warn military bases of incoming attacks.

His attorney, Brian Corrigan, said Brewer's time in the military damaged him.

“In the years since his release from the military, Mr. Brewer has suffered severe PTSD and had undergone significant therapy and had access to resources to get more help,” Corrigan said by email. “It is regrettable that he did not ask for more help. Instead, he got back heavily into drugs, including selling them on the dark web. Many veterans serve and suffer PTSD without committing crimes, but Aaron would never have gone down this path without suffering in war.” 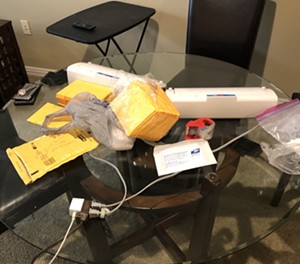 This is where Aaron Brewer, 39, packaged drugs to be shipped throughout North Texas and across the country.
U.S. Department of Justice

He'd ship the drugs he packaged in his apartment through various postal drop offs in North Texas. But that March, postal inspectors from the U.S. Postal Inspection Service found a ledger linking drug orders to tracking numbers inside Brewer’s apartment.

When FBI agents and the postal inspectors executed a warrant on his apartment later that month, they found about 621 grams of cocaine, three grams of black tar heroin and 18 grams of OxyContin. They also found $872.85 of stamp stock, 100 pages of ledger showing drug orders with tracking numbers, two computers, two sealer machines, a money counter, filler material and various packaging supplies.

“Aaron and his family are grateful to Judge Lynn for his 78-month sentence,” Corrigan said. “She clearly could have punished him much more severely. This is because Judge Lynn took into account that before his criminal activity, he was a decorated war veteran.”

Cracking down on Brewer is part of what law enforcement are calling Operation DisrupTor. Through the operation, authorities have arrested 179 Darknet alleged drug traffickers and fraudsters who took part in tens of thousands of sales of illicit goods and services across the U.S. and Europe. Law enforcement has seized over $6.5 million, around 500 kilograms of drugs globally and 63 firearms.

Throughout the operation, federal authorities say, agents discovered that the suspects were selling illicit goods on Darknet market sites such as AlphaBay, Dream, WallStreet, Nightmare, Empire, White House, DeepSea, Dark Market and others.

At a press conference last year, Deputy Attorney General Jeffrey Rosen said, “The arrest of 179 of them in seven countries — with the seizure of their drug supplies and their money as well — shows that there will be no safe haven for drug dealing in cyberspace.”
KEEP THE DALLAS OBSERVER FREE... Since we started the Dallas Observer, it has been defined as the free, independent voice of Dallas, and we'd like to keep it that way. With local media under siege, it's more important than ever for us to rally support behind funding our local journalism. You can help by participating in our "I Support" program, allowing us to keep offering readers access to our incisive coverage of local news, food and culture with no paywalls.
Make a one-time donation today for as little as $1.