City Hall Gets It Right and Wrong About Poverty and Crime The city sued the owners of Ridgecrest Apartments because the crime rate was too high. Jim Schutze
If it’s anything, the Ridgecrest apartment complex, located almost all the way to Mountain Creek Lake in far West Dallas, is proof that in the last half-century most local and national government programs designed to end poverty have been stupid.

Kind of like this: Build new apartments in hell, the apartments go to hell. Is there some part of this we don’t get?

Guess what. In Dallas we do get it. Or some people do. Just after the holiday weekend, Dallas City Council member Scott Griggs was touting a new deal struck by the Dallas Housing Authority to go into business with private partners for the development of mixed-income housing. That seems to be where all of the court decisions and the social science and the common sense are steering us.

Where we have been able to put poor people closer to successful, upwardly mobile working people, the poor people benefit from simply being near those healthier, happier lifestyles. I don’t think anybody has come up with a mathematical formula to explain it.

It’s something about seeing. People benefit just from seeing, from understanding that somebody nearby has a different set of values and that those values seem to be associated with happiness and health.

It’s very bottom-up. There’s nothing Lady Bountiful about it. Your betters are not bringing you the good word or treating you like a child. You see it. You figure it out for yourself.

You say, “I’m going to be like that woman who has a job with the county, not like that drunk I see leaning against the side of the convenience store every afternoon smoking weed and drinking 40s while her kids run loose.” It’s about the proof being right there before your very eyes, as opposed to hearing another sermon.

The thing that had Griggs excited was an initiative led by Dallas Housing Authority CEO Troy Broussard to partner with 12 private development companies to redevelop 146 acres as mixed-income housing. That’s a huge turnaround from the old paradigm in which public housing is developed as a new center of concentrated poverty and racial segregation.

Friday night at Ridgecrest: another police incident.
Jim Schutze
Griggs is happy because the first several projects to be undertaken under Broussard’s initiative are in Griggs’ North Oak Cliff district and will replace aging apartments left over from the old paradigm. He likes the fact that the new plan is to scrape and replace obsolete structures rather than spend money on what is called “Band-Aid rehab.”

Band-Aid rehab — actually a term of art, believe it or not — is where government funds are expended to patch up an apartment complex that has gone to hell for all of the reasons cited above, knowing full well it will go to hell again soon for all the same reasons. The only people who benefit long term are the small army of contractors who have forged close ties with politicians.

“When you say Band-Aid rehabs are acceptable,” Griggs says, “who shows up? Band-Aid rehab people.” He likes the fact that Broussard at DHA is partnering with big-name private sector development companies that bring proven track records with them.

The Broussard plan didn’t come out of thin air. DHA, under new board leadership, is striving to comply with a series of federal court rulings requiring it to seek projects that will not reinforce existing patterns of racial and economic discrimination and segregation.

All of that makes the case at Ridgecrest Apartments in far West Dallas all the more depressing. In that case, the city has been hounding a property owner to sell so that a new owner can come in and do a Band-Aid rehab.

Who wants that? Southern Dallas politicians. Crying alligator tears for the poor, neglected tenants at Ridgecrest — and they are poor, and they are neglected — the South Dallas subsidized housing mafia probably already has its Band-Aid rehabbers lined up and ready for another run at the trough.

The city hit a big snag recently, however, in its effort to force current owners to sell Ridgecrest. The city had been counting on a time-honored tactic, using state public nuisance laws to persuade a judge to shut the place down and levy $1,000-a-day fines on the owners. 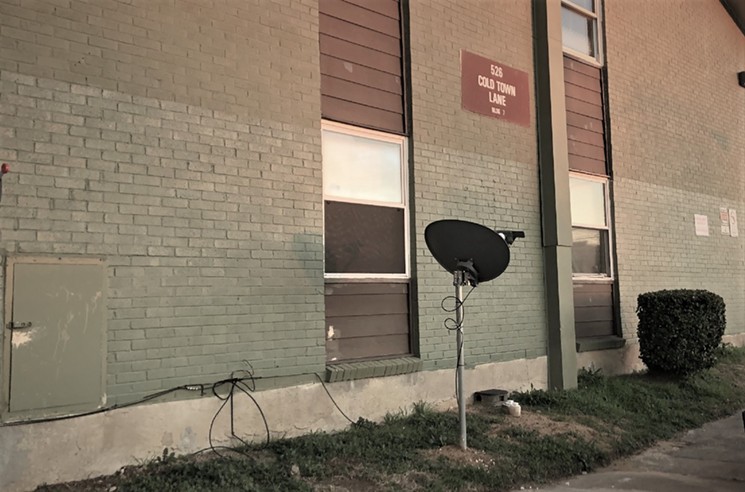 A judge refused the city's request that Ridgecrest be declared a public nuisance.
Jim Schutze
This is something I have written about for years in a number of instances — the Topletz properties in southern Dallas, Khraish Khraish in West Dallas, Dale Davenport’s car wash on Martin Luther King Jr. Boulevard and others.

The city pressures property owners and their tenants to report crime. They do. But then the city uses those reports to stab the owners in the back, claiming that the crime reports prove the property is a center of crime, a “public nuisance” under the law. That’s what was going on at Ridgecrest until the owners hired John Carney, the same lawyer who helped West Dallas landlord Khraish Khraish get out from behind the same eight-ball.

The city had sued the Ridgecrest owners, arguing that Ridgecrest was “a place where persons habitually go to commit crimes, including aggravated assault, arson and aggravated robbery,” and that “the owner knowingly tolerated the habitual criminal activity and failed to make reasonable attempts to abate the activity.”

A Dallas judge was on the verge of signing a temporary restraining order that would have had the effect of shutting the place down and evicting everybody. You might ask: How would that have helped the people who lived there? Obviously it would not have, unless you think making people homeless is a way to help them.

But it would have helped the city, which is knee-deep in a big real estate maneuver to force a sale of Ridgecrest. Getting a judge to slap $1,000-a-day fines on the current owner would be an obvious way to hurry that along.

At the last moment before the restraining order might have been signed, Carney went to court and argued that the city had not proved any of the basic elements of public nuisance. A landlord is at fault, he argued, if he allows a house of prostitution or a drug house to operate on his premises. But it’s not his fault if there is a lot of crime in the area.

Carney’s brief argued that “the City has the burden to prove three elements: (1) that persons habitually go to the property to commit a listed crime; (2) that the owner knowingly tolerates the crime; and (3) that the owner has failed to make reasonable attempts to abate the crime.”

He said the city had failed to prove any of those three things. All the city brought to court as evidence, he said, were 911 calls and some random arrests — about the amount of criminal activity to be expected anywhere in a considerable radius from the complex.

The judge agreed with Carney. The court did order the owners to clean up a list of building-code violations within six months. But the judge declined to sign the nuisance order that the city had been seeking.

In a way, the whole pattern of landlord demonizing from City Hall speaks directly to a confusion about what causes poverty and what causes crime. By blaming and penalizing property owners, the city is saying it’s not responsible for poverty or crime. And guess what. Really? It’s not.

The problem is that City Council members want the city to do something so they can tell their constituents they’re on the case. So City Hall goes out and takes a baseball bat to some hapless landlord who has about as much responsibility for what’s wrong as he does for the weather, not to mention being unable to do a damn thing about it.

There are aspects of the logjam at Ridgecrest that are not the fault of anybody on the ground, not the city, not the landlords. In fact, federal rules imposed by the U.S. Department of Housing and Urban Development, HUD, require that Ridgecrest remain exactly what everyone seems to agree by now it should never have been — a 100 percent low-income project.

Getting City Hall to change direction is like turning the Queen Mary. If you’re going to watch, you need to pack a lunch. But the new DHA initiative heralded by Griggs seems like the right direction. The harder part will be getting the other end of the ship to follow.
KEEP THE DALLAS OBSERVER FREE... Since we started the Dallas Observer, it has been defined as the free, independent voice of Dallas, and we'd like to keep it that way. With local media under siege, it's more important than ever for us to rally support behind funding our local journalism. You can help by participating in our "I Support" program, allowing us to keep offering readers access to our incisive coverage of local news, food and culture with no paywalls.
Make a one-time donation today for as little as $1.