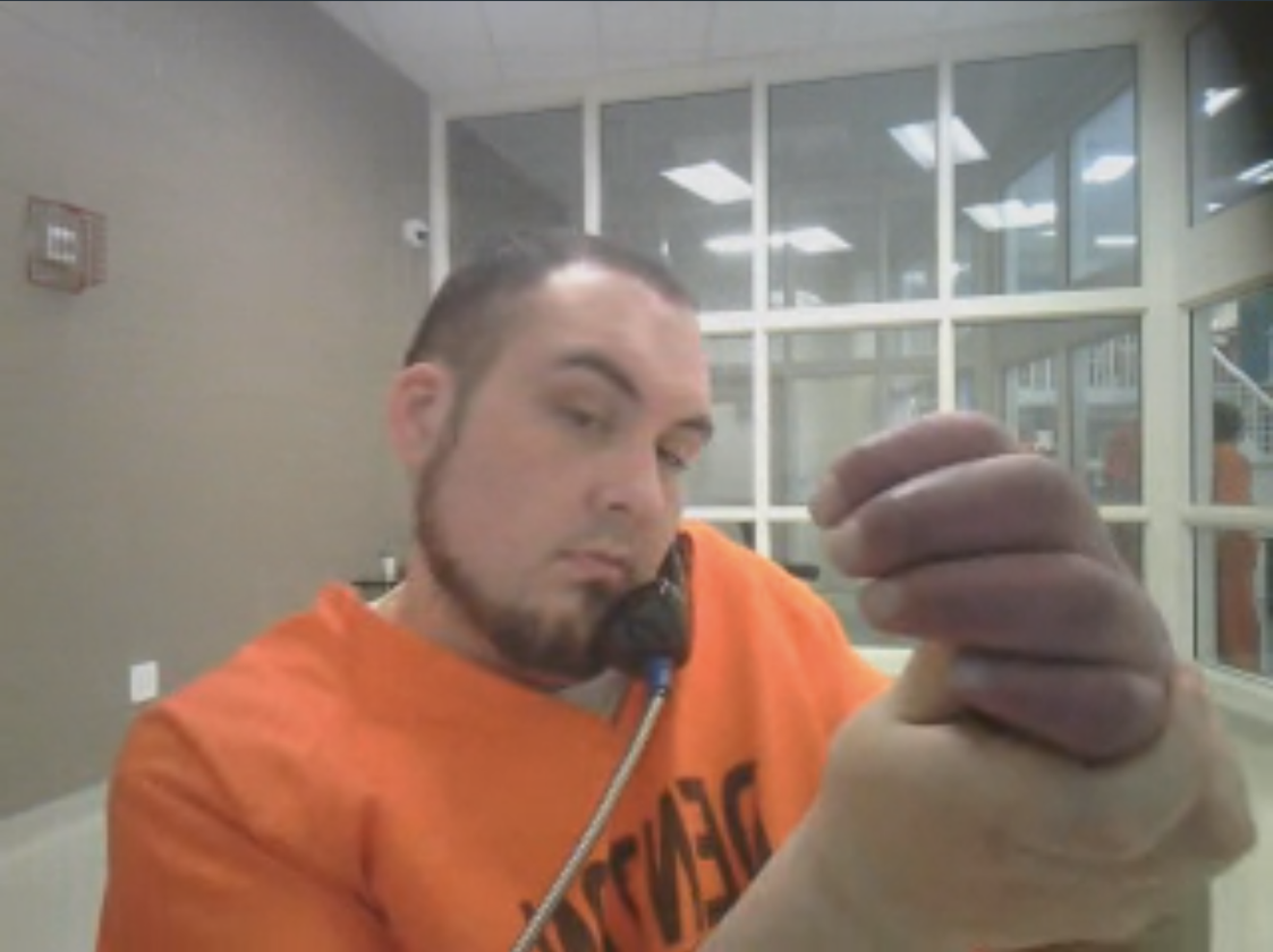 Gregory Corley says his arm must be amputated. Screengrab/Simone Carter
Greg Corley claims he’ll soon lose his right arm because of long-term medical neglect at the Denton County Jail. If he doesn't have it amputated, he'll likely lose his life.

Family and advocates plan to demand justice for Corley during a protest at the facility at 6 p.m. Wednesday.

“This can’t be what God has planned for me,” he told the Observer during a visitation Saturday. “This has been very morally draining.”

Corley had been in a motorcycle accident in 2019, leaving him with a stent in his arm. When he was arrested by bondsmen in February, he claims, he later asked the Denton County Sheriff's Office to not have him handcuffed behind his back because he feared his stent would collapse. Those pleas went ignored and that's what happened, he said.

From there, Corley alleges that it took months before he was brought to have blood flow returned to his arm. By then, the doctor told him that the only option left was amputation. Even still, Corley said, officials wouldn’t let him get the surgery.

Corley said he experienced a litany of other health issues due to the alleged medical neglect, such as gangrene and stroke-like symptoms. His fingers had turned purple and his arm was ice-cold to the touch.

It's not like he wants to lose his right arm, but he also doesn’t want to die of a blood clot. “No one should be forced to live this way,” he said.

After the Observer contacted the sheriff’s office on Monday, Corley was released on personal recognizance bond the following day, records show. He'd been arrested on charges related to drug and firearm possession. Corley was then booked at the Collin County Jail on Tuesday afternoon on separate charges related to the manufacture or delivery of drugs, unlawful possession of a firearm by a felon, theft and unauthorized use of a vehicle. It's unclear when or whether he’ll receive medical care there.

A Collin County Jail representative told the Observer they couldn’t discuss inmates’ health issues, but that they always have medical staff on standby. (Collin County Jail has also faced allegations of medical neglect.)
click to enlarge Greg Corley was arrested in February.
Simone Carter
Multiple advocates told the Observer that they were stonewalled at nearly every turn during their weeks-long fight for Corley. Kheri Hines, host of the radio segment “Let’s Talk Fort Worth,” has helped to lead the chorus demanding that he be taken to a hospital.

“We’re asking that his medical situation be given serious attention right now, because he’s not doing well,” she said. “His spirits are a little higher because [Denton County] released him, but at the same time, his physical condition has not changed and is worsening every day.”

"Dereliction of duty is what I’d call it." – Jeff Corley, Greg's father

Cindy Spoon with the grassroots organization Denton Bail Fund, which is hosting Wednesday’s protest, said the county doesn’t want to pay for the amputation surgery. She thinks they released Corley so that he can get treatment on someone else's tab.

Spoon is happy Corley may soon receive care but said his case is part of a much broader issue of medical abuse and neglect happening at the Denton County Jail.

Last month, the Denton Record-Chronicle reported that the institution had failed the state’s jail standards inspection. It partly made the non-compliant list because staff didn’t properly check on a female inmate “who later died of unknown causes," the Record-Chronicle noted.

Denton County Jail also made headlines during the height of the COVID-19 pandemic. Inmates claimed they weren’t provided functioning masks and that newly incarcerated women were made to bunk with those who’d tested positive for the virus.

Corley needs to get some form of justice, such as financial compensation, Spoon said.

“It’s not right that they are able to create this life-altering harm to an individual and then just release them after,” she said. “And I also wonder if this would be happening if it wasn’t for the protest and the phone calls and the public pressure that we’ve been putting on them.” Greg’s father, Jeff Corley, said he was “ecstatic” to hear about Corley’s release. He wants his son to finally receive the surgery he so desperately needs.

“I sure appreciate all the help that everybody’s given us to get us this far,” he said. “I’m just still appalled at the way they handled all that in Denton County. … Dereliction of duty is what I’d call it.”
KEEP THE DALLAS OBSERVER FREE... Since we started the Dallas Observer, it has been defined as the free, independent voice of Dallas, and we'd like to keep it that way. With local media under siege, it's more important than ever for us to rally support behind funding our local journalism. You can help by participating in our "I Support" program, allowing us to keep offering readers access to our incisive coverage of local news, food and culture with no paywalls.
Make a one-time donation today for as little as $1.