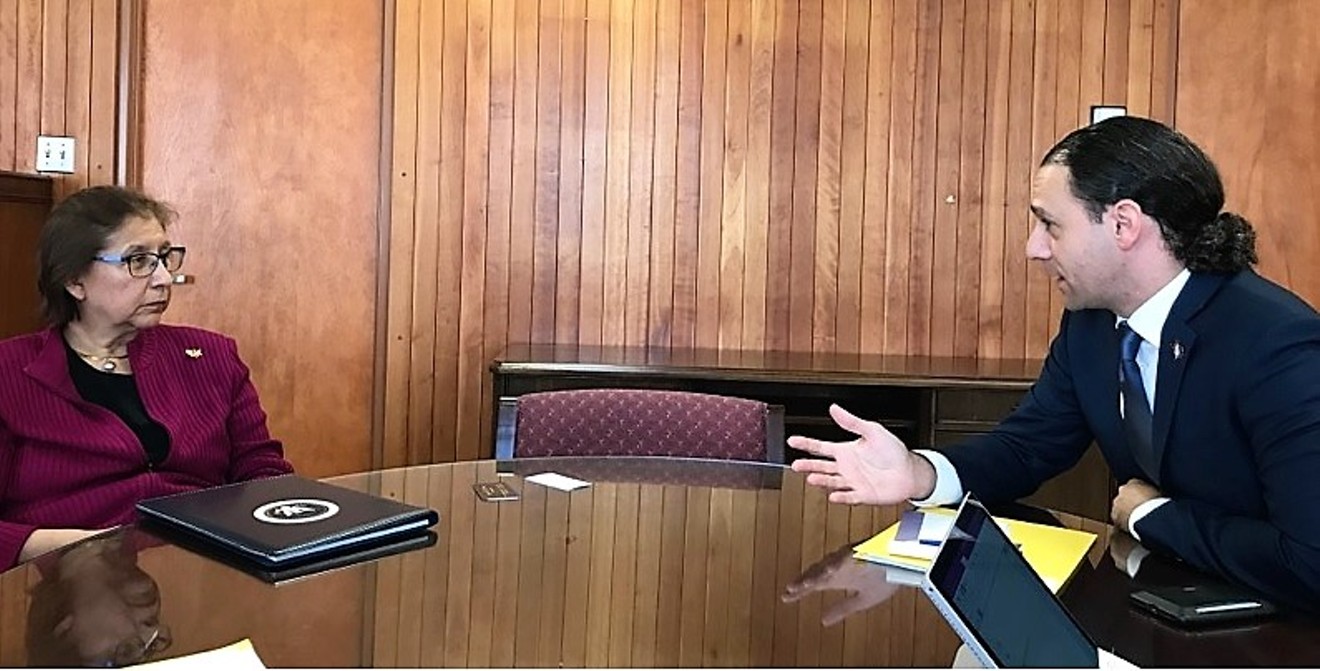 HUD Assistant Secretary Anna Maria Farias met last week with Khraish Khraish of Dallas. Khraish was in Washington to discuss low-income housing issues with federal officials. Hilda Duarte
When Dallas City Council members grilled city staff during a committee hearing Monday about a lack of progress on affordable housing issues, staff forgot to mention the team of feds breathing down their necks. They could have told the council: “We’ll know more after we figure out who’s going to the pen.”

The city can’t account for what may be hundreds of millions of U.S. Housing and Urban Development dollars funneled through the Dallas Housing Department and other city agencies. An unsuccessful yearlong effort to follow the money by regional HUD staff apparently has been taken over by a sizable contingent of investigators from HUD’s Office of Inspector General in Washington.

Multiple sources within and outside City Hall who asked not to be named have been telling me for the last month that the HUD OIG people are occupying desk space full time within the Dallas Housing Department. Last week, West Dallas landlord Khraish Khraish met in Washington with Anna Maria Farias, HUD's assistant secretary for fair housing. Khraish told me afterward that Farias confirmed the existence of the OIG investigation. He said she declined to discuss details but said it was a matter of daily concern to her.

Jereon M. Brown, HUD's general deputy secretary for public affairs, confirmed that Khraish had met with Farias but did not confirm the remark Khraish attributed to Farias — that the Dallas OIG investigation was a matter of daily concern to her.

Now that we have reported it, you can expect an official announcement of the OIG probe in The Dallas Morning News any day now.

Khraish with Nancy Pelosi
Hilda Duarte
The bottom line, as I have been reporting since March 2016, is that a routine audit of the housing department by the Dallas city auditor — not HUD — found $29.9 million in HUD money missing, and that was from only a 10 percent sample of city transactions. A reasonable extrapolation might put the total amount Dallas can’t account for at more like $300 million.

All of the bad stuff, however, happened on the watches of former City Managers A.C. Gonzalez and Mary Suhm, before the arrival of current City Manager T.C. Broadnax. Broadnax, who was recruited from outside the city, quickly unloaded the old-school loyalists who had been running housing for a decade and made an extremely interesting pick to replace them.

David Noguera, the new head of the Dallas Housing Department, comes from HUD in Washington. Among several high-ranking posts there, Noguera oversaw a special “audit resolution division” set up to negotiate settlements with cities that found themselves on the dirty end of investigations by the HUD OIG. So we ought to be able to assume that the OIG people in residence in the Dallas Housing Department are at least familiar enough with Noguera to say, “Hi, Dave,” when he walks through.

I am attempting to confirm the nature of the OIG investigation with Noguera’s boss, Dallas Assistant City Manager Raquel Favela. Radio silence so far. I’ll keep you posted.

Meanwhile, what does all of that mean? First, it means the nagging letters last year from the HUD Fort Worth offices — hey, where’s our $29.9 million? — went nowhere.

But it also means that Noguera, who obviously knows what he is doing, must have played some role in getting the investigation taken over by the serious people. And why would that be, if Dallas Housing is his department now? Because the missing hundreds of millions are not his.

U.S. Sen. Charles Schumer of New York. left; Hilda Duarte, Patricia Caballero, foreground, Delma Gorostieta, head poking out, all of LULAC; Khraish, background; Nancy Pelosi on his right; Mari Corugedo, LULAC, far right.
LULAC
If anything, all of them —– Broadnax, Favela and Noguera — look like they are swabbing the decks and plugging holes in the hull, trying to get the dirty old boat shipshape again. And that’s a good thing, right?

But it still makes for some stupid moments. Yesterday, a council committee heard about certain delays in something called the “regional assessment of fair housing” — all gummed up, the staff said, because HUD has changed certain parameters. No kidding. Like the parameter of who goes to the pokey. They didn’t mention that parameter.

And did you notice above — it kind of flew by — that I said West Dallas landlord Khraish Khraish had been meeting with an assistant secretary of HUD in Washington? Yeah, and I didn’t even tell you he also met with the president’s new buddies, Chuck and Nancy — U.S. Sen. Charles Schumer, a Democrat from New York, and House Minority Leader Nancy Pelosi. Khraish was in Washington to attend a meeting of the League of United Latin American Citizens, the national Hispanic advocacy group, but he also met with federal officials to discuss fair housing issues.

I suggested at the end of last week that Khraish, who has been demonized by City Hall as a slumlord, is someone the city instead might want to start treating as an expert. He has a track record of providing low-income housing, and he manages to do it without misplacing hundreds of millions of dollars that don’t belong to him. If he were to appear on an affordable housing panel with several longtime alumni of City Hall, he would be justified in putting a little ID sign in front of himself saying, “Not Headed for the Big House.” Just to make the distinction.

More on him tomorrow. We had a very intriguing chat yesterday about how you can successfully lend money to poor people. Even your own money! I’ll be back with that.