It’s All About Bolton’s Mustache. The Rest Is Misdirection.

Trump doesn't like John Bolton's mustache. Could he be right? Gage Skidmore / Creative Commons
This may be an ill-informed and over-personal approach to a very serious matter, but I truly believe the whole Trump/Bolton imbroglio is about the mustache. Hear me out. OK, hear me part of the way out.

Right after he was elected president, Donald Trump declined to hire John Bolton because of his mustache. Trump told confidants that he objected to Bolton’s bushy white mustache, which is sort of a cross between Yosemite Sam and Hitler.

Bolton, a former undersecretary of state and former U.N. ambassador under previous presidents, eventually did join the Trump inner circle as national security adviser, but then he sort of bolted back out after reportedly describing the president’s Ukraine policy as a “drug deal.” Now leaked pages of an upcoming book by Bolton seem to confirm the drug deal characterization, and that revelation has thrown the impeachment proceedings into disarray.

All of the top Washington pundits are focused now on friction between Trump and Bolton arising from Bolton’s history as an extreme war hawk and Trump’s tendency to cozy up to problematic regimes. I’m sure that’s all very important.

But look at what happened. Bolton didn’t just disagree with Trump. He punked him. He punked the heck out of him.

He saves up his manuscript and his book release. Then just at the right moment, at the most delicate possible point in the impeachment proceedings when the question of calling witnesses is up for grabs, the Bolton manuscript leaks.

There is something deeply personal here. That doesn’t mean there cannot also be political and philosophical differences and motivations in play. But that punk shot right between the eyes from around the corner, that’s the mustache talking.

Bolton didn’t just disagree with Trump. He punked him.

In fact, if Trump gets defeated in 2020, you could make a case that it will be all about personal insults. And I don’t mean necessarily he will lose because he has insulted so many people. He could win because of it. In fact, some of the people most susceptible to his taunts may turn out in droves to vote for him.

You can go ahead if you want and try to dope out everything going on in Washington according to political philosophies and economic trends and so on. But I think it’s a fool’s errand. Trump has taken the nation by the hand and waltzed it into the eerie dreamscape of the subconscious, the land of the wounded heart. And the goofy mustache.

Some of this may still be susceptible to reason, at least on the surface. From the first debate in 2016 when Megyn Kelly took Trump to task for calling women fat pigs, dogs, slobs and disgusting animals, his numbers among educated suburban women have been subpar, as they should be.

But his popularity with his hardcore base seems to have been untouched by stories about his problems with truth-telling and his serial personal attacks on individuals. I don’t know about the truth-telling. People’s expectations of public figures may simply be much lower in this department than what the pollsters anticipate when formulating their questions. Maybe the question should be, “Is President Trump any worse a pants-on-fire liar than most of them?”

But I do know about things like mustache insults, having worn a full mustache and beard myself since … I don’t even remember when. The fifth or sixth grade? Long enough to know this much: You never let a person who insults your mustache see that he has gotten to you. You smile and roll with the punch.

But you never forget. In the very wee hours, in the safety of your pillow and covers, you plot your revenge. It’s something about mustaches. Maybe that’s why they’re not allowed in some venues.

Please don’t let me oversimplify here. Really nothing is more complex, subtle or unpredictable in its effect on people than the crude physical insult. Take, for example, the instance in which President Trump, who is obese, body-shamed a man in the crowd at a rally for being obese.

“That guy’s got a serious weight problem,” the President of the United States said to an adoring crowd. “Go home. Start exercising.”

As it turned out — you know this already, sorry — Frank Dawson, the overweight man whom the president ridiculed for being fat, is an ardent Trump supporter. He told The New York Times afterward: “Everything’s good. I love the guy. He’s the best thing that ever happened to this country.”

So here — and I find myself struggling to find a way to express this without cruelty — we have a very fat man, the president, publicly ridiculing another fat man, Frank Dawson, for being fat, and Frank Dawson says, “I love the guy.” 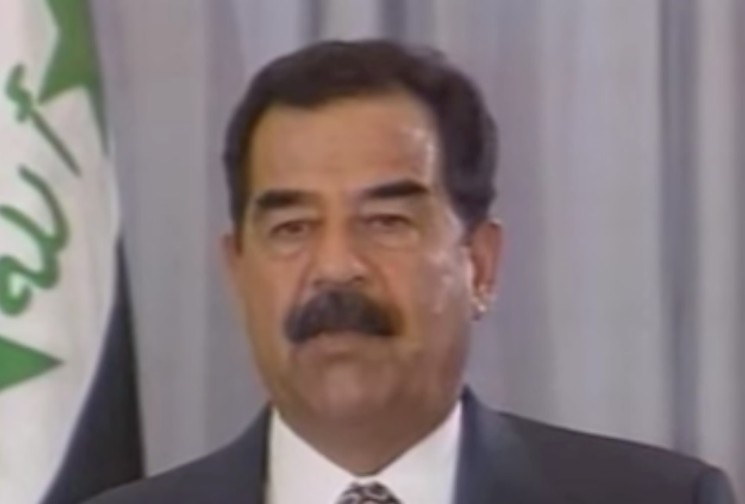 Saddam Hussein, the only other public figure on the international stage in recent memory with a Bolton-esque mustache.
Creative Commons
Lately a popular theme among people who write about the president has been that he consistently insults people for things like being fat or telling lies, things that are true of himself. His crudest insults are projections, things he says about other people because he doesn’t want to accept them in himself. All very Freudian.


Bolton is a Yalie. So what’s he doing with a Saddam mustache?

Trump calls people morons all the time. According to Bob Woodward, Defense Secretary Jim Mattis said Trump had the understanding of a “fifth- or sixth-grader.” The Washington Post and NBC News both have reported that former chief of staff John Kelly called Trump “an idiot” on multiple occasions, although Kelly has denied it. Vanity Fair says former White House adviser Steve Bannon told their writer that Trump “is like an 11-year-old child.”

And let’s say, just for the sake of argument, that we dismiss each and every one of those characterizations as a lie promulgated by the lying left-wing media. Then do this for me as a thought experiment: Google, “Trump rambling.”

There he is, big as Dallas and all over the world, at Davos with world leaders, at the White House with Chinese officials, in front of a crowd in Baltimore, rambling, rambling, rambling. It simply is not possible to watch Trump ramble, especially off the cuff (chopper talk is best) and not see that he is missing major nuts and bolts.

And then the cameras cut to his supporters for their adoring reaction, and what do we see? Almost no nuts or bolts at all.

Some kind of deep dark synchronicity whirls here. I could try to go deeper, but I am afraid. I really don’t want to know more about this until I have no choice.

Hovering above it all like a vengeful condor is the bushy white mustache of John Bolton. And let me ask you something about that mustache. Why does he have it?

Maybe I’m missing something, but I can only think of one other major player on the international stage who had that particular type of mustache, the bottle brush above the lip: Saddam Hussein.

Bolton is a Yalie, both undergrad and law school. He was head of his high school’s Students for Goldwater club. He went to law school with Clarence Thomas.

He avoided the Vietnam War by enlisting in the Maryland Air National Guard.

In a long subsequent career in Washington, Bolton has never seen a war he didn’t love. He has supported every possible effort and attempt to send American soldiers into combat. He is the perfect rock-ribbed Republican.

So what’s he doing with a Saddam mustache? I think it’s obvious. The Saddam mustache is John Bolton’s missing bolt, the little crack or fissure that gives us a peek inside, a glimpse of the complex soul twisted and folded inside that Patton-esque veneer. And guess what? We’ve all got one — a bolt gone AWOL.

Now he’s doing it to the whole country, and it’s the only thing that counts. I totally get why his supporters love him for singling out their own shortcomings. There are only two ways you can go with the bro. You laugh and embrace him. Or you have to stand up and take him on, and not everybody is up for that.

Bolton is up for it. Way up. Everything about the leaking of his book is cagey and planned. He’s going to be the guy who takes the bro down, and, when that happens, it will be all about the mustache.

Is facial hair a worse source of wounded pride than body mass or anything else? It depends. It’s different with everybody. A person might be able to laugh off one crude physical insult from Trump and not be able to take the next.

But there in the middle of the playground, standing all alone, is little Johnny Bolton, the only kid in the fifth grade with a bushy white mustache. The president is having great fun about it. And little Johnny is just standing there with a weird smile. A very weird smile.
KEEP THE DALLAS OBSERVER FREE... Since we started the Dallas Observer, it has been defined as the free, independent voice of Dallas, and we'd like to keep it that way. With local media under siege, it's more important than ever for us to rally support behind funding our local journalism. You can help by participating in our "I Support" program, allowing us to keep offering readers access to our incisive coverage of local news, food and culture with no paywalls.
Make a one-time donation today for as little as $1.