Fort Worth Incident Highlights Growing Use of Drones to Smuggle Contraband into Prisons, Say Feds Drones attempting to fly into airspace over federal and state prisons often carry packages containing electronics and drugs. Tochanchai/Shutterstock
Just before midnight on May 4, a surveillance camera at a high school near a federal prison facility in Fort Worth captured a red Chevy Tahoe with a Transformers decal on the back window pulling into a parking lot.

Law enforcement officials say at this point a man named Bryant LeRay Henderson, 42, stepped out of the vehicle and launched a drone into the airspace over the Federal Medical Center, a federal correctional facility in Fort Worth.

According to an Aug. 12 Department of Justice (DOJ) press release, attached to the drone was a package carrying 46 grams of crystal methamphetamine, 87 grams of pressed THC, two prepaid smartphones and nine MP3 players. Despite the alleged attempt, the drone crashed near the prison’s HVAC shop where prison staff would later find it, along with all the contraband onboard. More than a week later, officers with the Fort Worth Police Department would pull over the red Tahoe for a routine traffic stop.

According to court documents, Henderson identified himself as William, instead of Bryant, when Fort Worth police stopped him, giving them his date of birth and home address. But when they looked into it, the information he gave was instead tied to a Bryant Williams. They found his Instagram account, which included a picture of him in a red Tahoe with a Transformers decal on the back.

After reviewing other surveillance footage captured on nearby cameras, the police were able to find a license plate number for the Tahoe. But then, the Dallas Police Department found the vehicle abandoned in a travel lane with the hood up and hazards on some two and a half weeks after it was seen at FMC Fort Worth. When it was impounded and searched, police found Henderson’s debit and Social Security cards, various drone accessories, more than a dozen smart phones, tobacco products and vacuum-packed containers that were labeled as steroids and connected to a fishing line and a keyring.

Court documents don’t explain or speculate as to why the car was abandoned. But one of the accessories police found was a drone controller, and when they powered it on it immediately paired to the drone found at the Fort Worth federal prison. The drone also had 70 recorded flight logs capturing date and time stamps, as well as its speed, height and location.

The logs showed the drone infiltrated FMC’s airspace four times. They also showed the drone had twice flown into FCI Seagoville, another federal correctional facility near Dallas. When the police looked into Henderson’s cell phone data, they found he was near the prisons at times that associated with the drone’s flight logs. In June, investigators visited a motel where Henderson was staying and interviewed two employees who confirmed his identity and that the red Tahoe was his. One of the employees also said when they had to address a noise complaint at Henderson’s room, they saw “lots of narcotics, electronics and a large black drone," according to court documents. On top of it all, Henderson allegedly didn’t have a license to operate the drone.
click to enlarge 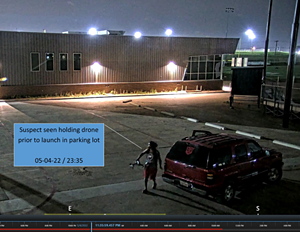 
If convicted of the charges he might face, Henderson could be looking at 45 years in prison. He made his first appearance before U.S. Magistrate Judge Jeffrey L. Cureton on Friday. It’s unclear if Henderson has an attorney.

According to the DOJ, drone contraband delivery is becoming increasingly problematic for federal and state prisons. A 2020 audit by the DOJ’s Office of Inspector General found that the number of drone incidents recorded by the Bureau of Prison increased by over 50% in just a year’s time.

“We found that the BOP faces significant and growing challenges to protect its facilities from drone threats,” the audit said. “Drones have been used to deliver contraband to inmates, but could also be used to surveil institutions, facilitate escape attempts, or transport explosives.” These incidents are likely underreported, according to the audit.

Last month, the DOJ charged a Houston man for allegedly operating a drone over FCI Beaumont. A few months before that, another man in New Jersey admitted to being involved in a conspiracy to use drones to smuggle cell phones and tobacco into FCI Fort Dix. Last fall, three men in Georgia were sentenced to a year each for using drones to smuggle electronics and tobacco into a state prison.

“Contraband drone deliveries are quickly becoming the bane of prison officials’ existence,” U.S. Attorney Chad Meacham said in the press release. “Illicit goods pose a threat to guards and inmates alike – and when it comes to cell phones, the threat often extends outside prison walls. We are determined to stop this trend in its tracks.”

"The Bureau of Prisons (BOP) is committed to ensuring the safety and security of all inmates, staff, and the public, which includes addressing the security threats that Unmanned Aerial Systems (i.e., UASs or "drones") pose to our facilities," the agency said in an emailed statement. "The BOP addresses this problem using a multi-faceted approach. We continue to proactively research, rigorously evaluate, and deploy proven security technologies to detect, interdict, and mitigate dangerous contraband, including UASs."
KEEP THE DALLAS OBSERVER FREE... Since we started the Dallas Observer, it has been defined as the free, independent voice of Dallas, and we'd like to keep it that way. With local media under siege, it's more important than ever for us to rally support behind funding our local journalism. You can help by participating in our "I Support" program, allowing us to keep offering readers access to our incisive coverage of local news, food and culture with no paywalls.
Make a one-time donation today for as little as $1.