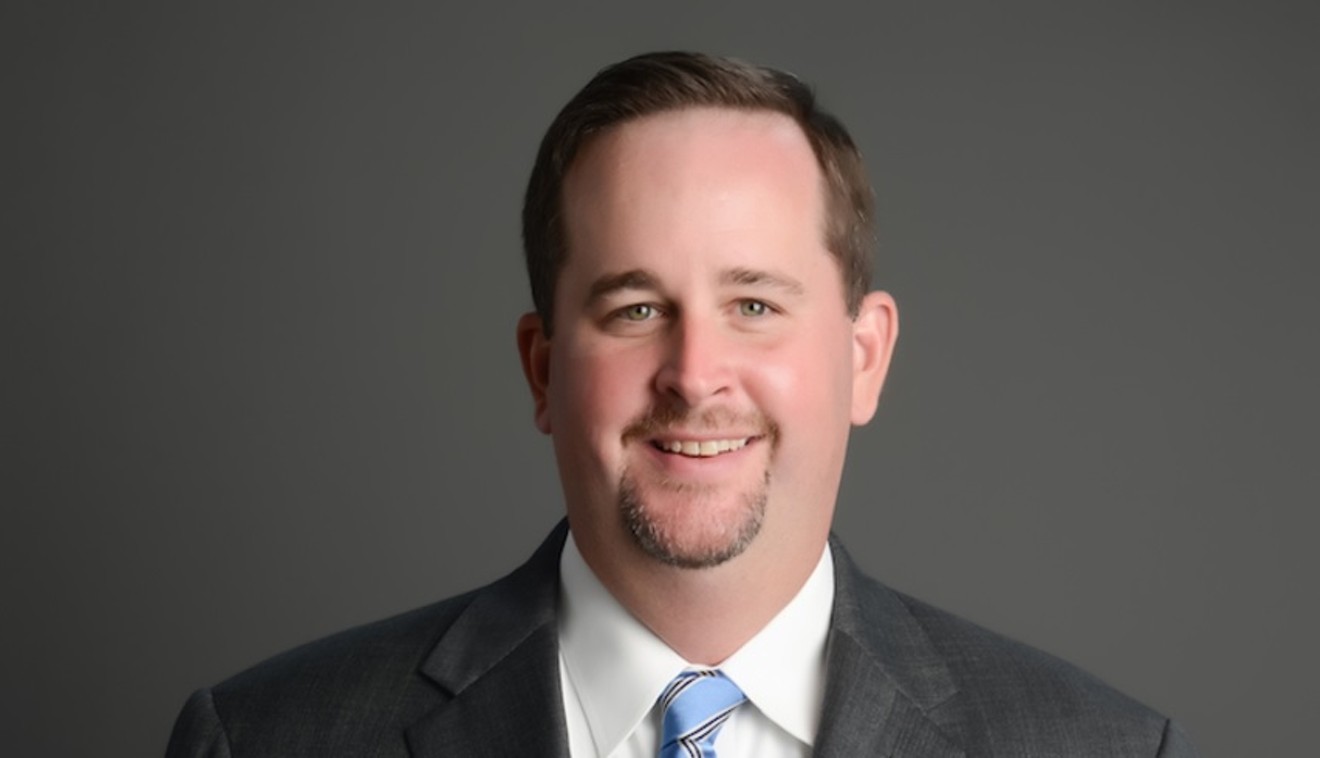 All our national politics buttons are being pushed — Trump revulsion, Occupy, shoulda been Bernie, Hillary got robbed, Springsteen rules — to get us to vote for an agenda that would betray and abandon poor minority kids in this city in favor of seniority pay for teachers and a Tammany Hall patronage system.

The significant school reform achievements of the last several years hang by one vote on the school board. A vote for Lori Kirkpatrick, the anti-reform candidate in District 2, is a vote to roll back and destroy the entire reform agenda.

In her runoff campaign against Dustin Marshall, the incumbent whom she beat in the joint election May 6, I think Kirkpatrick practices a deep streak of dishonesty. But I’ll let you be the judge of that when I come back to it in a minute.

Meanwhile, I do know that the teachers unions have become adept at whispering into the ears of a certain kind of parent to convince him or her that school reform is an evil plot by a bunch of Daddy Warbucks Trumpsters. Meanwhile, the closest thing they have to a discernible agenda of their own is an avid hostility for merit pay systems for teachers, which Kirkpatrick describes as "pitting teachers against each other."

The merit pay system put in place by former Dallas Superintendent Mike Miles is the cornerstone of an entire architecture of reform. The best and only way to turn poor kids around is to send the very best teachers into their classrooms in the earliest possible grades.

Paying a premium to the best teachers is how the district tells teachers what the district wants from them — better student outcomes. Of course, the unions hate that logic, because any good union's job is to protect seniority pay and job security above all else.


"The unions hate that logic, because any good union's job is to protect seniority pay and job security above all else." — Jim Schutze

Kirkpatrick has received pats on the back from revered author Diane Ravitch, who has become the unofficial national spokesperson for the teachers unions in their defense of seniority pay and locked-in tenure for teachers.

Kids can’t read? They drop out? Sell dope? Get caught? Go to prison? Find themselves concertina-wired out of a decent life? The Ravitch line is that all of that is terribly sad, but we can’t fix any of it with merit pay and outcome-based evaluation.

How do we fix it? Only by ending poverty. Oh, forgot: We don’t know how to do that. Well, meanwhile, carry on as you were, with seniority pay. The status quo rules.

“These days, those who call themselves ‘education reformers’ are likely to be hedge fund managers, entrepreneurs and billionaires, not educators," Ravitch writes. "The adherents of the business approach oppose unions and tenure, preferring employees without any adequate job protection and merit pay tied to test scores. They never say, ‘We want to privatize public schools.’ They say, ‘We want to save poor children from failing schools.’”

But we happen to have evidence right in our faces that school reform — measuring teacher effectiveness and basing pay on it — does exactly what Ravitch sneeringly says it cannot — saves poor children from failing schools.

A dramatic example and a school the Dallas Observer has devoted some attention to in the past is Dade Middle School, only two years ago a failing, chaotic mess of a school where  teachers were breaking down sobbing in front of their classrooms and the cops were pepper-spraying kids in the halls. Since then, Dade has been a focal testing ground for a Miles school reform program called ACE Schools.


"We happen to have evidence right in our faces that school reform — measuring teacher effectiveness and basing pay on it — saves poor children from failing schools." — Jim Schutze

Five years ago when Miles took over the Dallas school system, school board members insisted that he allow them, along with influential neighborhood leaders, to dictate hiring at Dade. Miles obeyed and found himself mired in a decades-old system of political patronage that was the illegitimate child of the civil rights movement. He even had to hire former — supposedly former — gang members as educational consultants.

When that scheme only produced more chaos, Miles ditched it. In its place, he imposed his idea, the ACE Schools program, which involved paying top teachers, newly identified by his merit-pay evaluation system, to go to Dade and teach.

In the last two years, Dade has seen dramatic improvement in the campus ratings imposed every year by the Texas Education Agency, soaring ahead in student achievement and student progress, closing achievement gaps and progressing toward college readiness. The last one, postsecondary readiness, is the most improved.

I called Miles in Colorado last week to check my memory. He said: "Keep in mind we didn’t use patronage to do it. We actually blew that out of the water. We put in all new, different people, really good, strong teachers, and that in the end of the day turned it around.

"It wasn't this culturally sensitive training and using the gang members from that group that wanted a job and contracts at Dade or you're not respecting the community. That all turned out to be B.S.," he said. "What really affected it was high-quality teaching, good leadership. That is what made the difference." 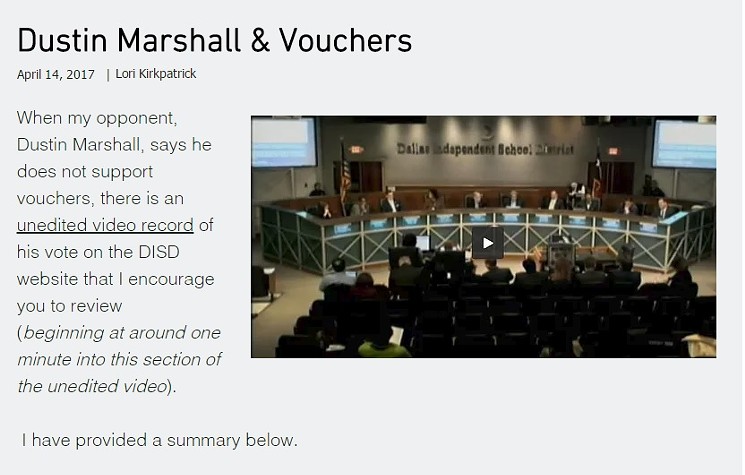 ... but if you watch the video, Marshall says nothing about vouchers. Not one word.
kirkpatrick4disd.com
In her campaign materials, Kirkpatrick has swallowed the Ravitch line whole cloth and regurgitates it as gospel. Her Facebook page warns that school reform is a sinister four-step corporate plot.

"The first step is defunding public education, which the State of Texas did in 2011," she warns. "Their next step is to enact an A-F school accountability system, which Texas enacted in 2015 and will go into effect as of the 2017-18 school year. Then reform leaders will work to pass a voucher program. And finally, completely privatizing public education."

It’s a free country. Anybody can be against school reform. But I find myself questioning Kirkpatrick’s core integrity when she continues to accuse Marshall of supporting private school vouchers. Vouchers — sending public school money to private schools — are an idea way out on the right-wing fringe of school reform.

Citing a school board meeting in which Marshall said nothing about vouchers — not one word — Kirkpatrick says on Facebook, "I can assume that perhaps Mr. Marshall couldn't speak out against vouchers because he would directly benefit from them, as he sends his children to private schools."

After she accused him of supporting vouchers with silence, Marshall spoke publicly and loudly against them. Last April in a school board meeting, Marshall said, "I think I speak for everybody at this table and certainly for myself in our opposition to vouchers as education advocates. We firmly believe that institutions spending taxpayer dollars should be held accountable for the education results of their students, and that’s not possible when you give money to private schools.”

Reform is complicated. It has a lot of moving parts. I have followed Marshall for several years, since his involvement in volunteer literacy programs long before he ever ran for office. He’s a middle-grounder, a moderate. It’s perfectly conceivable and reasonable for Marshall to embrace some aspects of reform — letter grades for schools, for example — and reject others, like vouchers.

But even in the face of his clear statement, Kirkpatrick continues to suggest by innuendo that Marshall is lying and is really a vouchers secret agent. When I called her, I asked her repeatedly to tell me if she means to say, yes or no, that Marshall supports vouchers in spite of his saying he does not.


"It’s perfectly conceivable and reasonable for Marshall to embrace some aspects of reform — letter grades for schools, for example — and reject others, like vouchers." — Jim Schutze

I said, “‘Talk is cheap’ means that the talk is not honest, that he’s deceiving the voters, that really his agenda is vouchers.”

We went around and around like that until I gave up. My personal opinion stands. If you’re going to repeatedly suggest in public that a guy is a liar, you ought to have the backbone to say it straight out.

Neither Ravitch nor Kirkpatrick has the right to impose some mechanical thought system on us — if you believe this, it automatically means you believe that, no matter what you say — and then use that as a tool of public denunciation. How is that progressive? Sounds a tad fascistic to me.

I think handling it that way merely allows Kirkpatrick to duck responsibility for saying clearly what she’s obviously suggesting. It reduces her entire message to a slime campaign. But that’s up to you. You may see it differently.

Marshall has ideas and programs he helped put in place for saving the lives of lost children. A vote for Kirkpatrick is an endorsement of sleazy campaigning, but far worse, it’s a vote to abandon school reform. For any good self-respecting, bleeding-heart hair-shirt like myself, that ought to be an easy call.