Lynetta Washington Was Killed During a Street Takeover. Her Family is Still Searching For the Killer 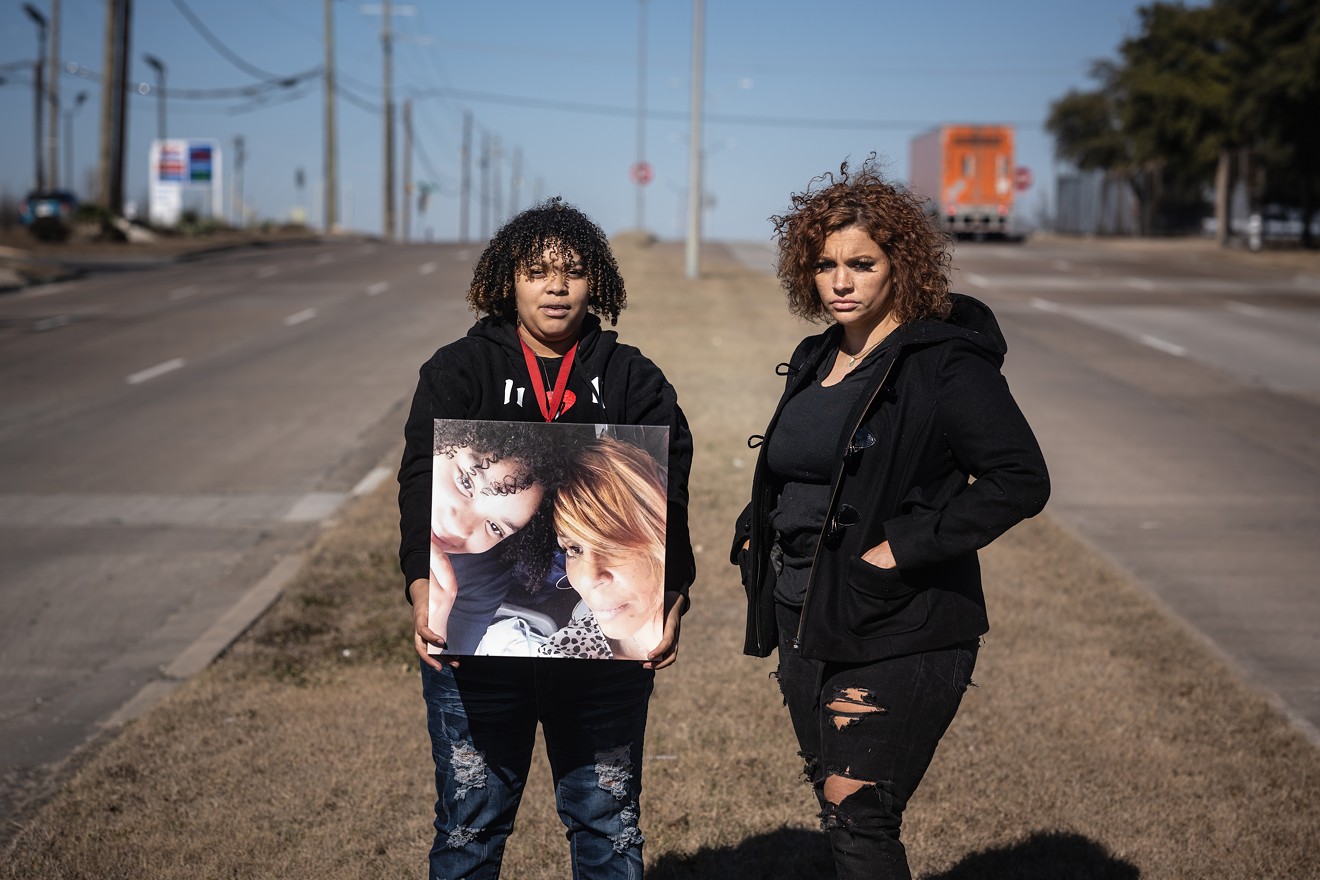 Angel Durr and her sister, Myah Hill lost their mother, Lynetta Washington. Mike Brooks
Lynetta Washington thought the street takeovers were cool at first. Drivers would block off an intersection and burn rubber right in the middle of the street, surrounded by crowds of spectators. The people behind the street takeovers call themselves swingers, referring to how their cars whip around when they do donuts and other stunts. The takeovers would happen near Washington’s apartment complex. It was all interesting to Washington, a 54-year-old southern Dallas resident and trained mechanic.

Then she began hearing about gunfire and injuries that would occur at the takeovers. She started to feel the events were a nuisance and put too many people in danger, which was particularly important to her because she worked in healthcare, her family says. She’d previously been a nurse's aide. She was working from home as a call agent for a telemedicine company last year when she was shot and killed outside of her home. 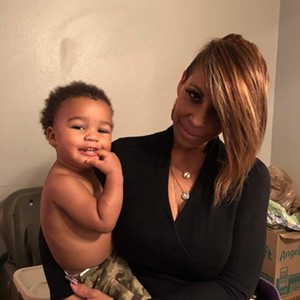 Lynetta Washington holds her grandchild in a family photo.
courtesy of the Durr family
Police say Washington was struck by a stray bullet when an unknown person randomly fired a gun at a street takeover in her neighborhood. Washington’s family says the bullet was meant for her, retaliation for an argument between Washington and the stunt drivers moments before she was killed. No one has been arrested for shooting Washington, and her family feels DPD is dragging its feet investigating the crime, which was captured on video.

“After speaking with detectives, the department has not found any evidence to prove that the shot that struck Mrs. Washington was intended for her,” a DPD spokesperson told the Observer. “Detectives worked vigorously to find who committed this terrible crime. The video that was obtained did not show who fired the shot that struck Mrs. Washington.”

The department hopes anyone with information will reach out.

Meanwhile, Washington’s family says they’ve started doing their own work on the case, planting hidden cameras in the area and hiring lawyers and private investigators.

Washington had four children. Angel Durr, 34, is the oldest. “I’ve always kind of been the closest to her since I was with her the longest,” Durr said.

She would always move near where Durr was staying. “That included me going to school and stuff,” Durr said. “I was a first generation college student, so that made her really happy.”

Washington was adopted in Connecticut, where she was born and raised. But, her family is from Texas. Durr’s grandmother worked for a Texas company. When the company moved to Connecticut, Durr’s grandma followed. Angel Durr and Myah Hill stand behind a memorial to their mother, Lynetta Washington.
Mike Brooks
Growing up, Washington would spend summers in Texas, most times in Oak Cliff. Early in the pandemic, Washington and most of her family, including Durr and her sister in-law Kyla Mckinzie, lived in Denton. They moved from Denton to southern Dallas in early 2021.

People would get annoyed at the traffic the takeovers would cause, but more or less, Mckinzie thought it was innocent fun. “I just saw a bunch of kids having a good time,” she said. “I never thought it would end in something so violent, you know?”

As for Washington, Durr said: “My mom loved cars, so she was actually really interested in it at first. But then when they were shooting and stuff, [and] that’s when her opinion changed on it immediately.”

Durr always felt the stunt drivers were dangerous. She lives in Addison near the city's airport, where she says takeovers have been frequent since the pandemic started. To her, the groups behind the takeovers are like gangs. “This is not like just a fun thing,” Durr said. “These car clubs are actually gangs. They are mobilizing the same way that gangs do. I feel like there’s a lot more to the story than just a fun night out doing something because you want to show off your vehicle.

“When people are dying, that’s not just a car club. I grew up around cars. My mom is a trained mechanic. But at the same time, we respect vehicles, and we don’t just go off and create unsafe situations for people.”

Just a couple of months after Washington moved to Dallas, she was shot and killed. “If you stand in the spot where it happened, you can see her apartment,” Mckinzie said.

Washington let a friend borrow her car that day. When her friend was returning the car later that night, they got stuck in traffic caused by a street takeover near Washington's home. “It’s literally like being stuck in traffic on 635,” Mckinzie said. “You can’t move. It’s just people angry, and they want to leave, but there’s people in front of you doing dumb stuff so you can’t.”

Durr and Mckinzie say that Washington started walking to where her friend was stuck because she thought it would be faster than waiting for the takeover to disperse. “Because of the woman she was, I’m pretty sure she was already mad that she had to get her car,” Mckinzie said. “I’m sure when she saw them she was frustrated and probably told them ‘Hey, get off the street! What are you all doing?’”

The family believes this is what instigated the shooting. Angel Durr and her sister, Myah Hill lost their mother, Lynetta Washington.
Mike Brooks
When Washington walked off, Durr said three cars followed her. She said someone in one of those three cars shot her mom. “We have a video of it happening, with the cars and everything, and just execution style, left her there,” Durr said.

It took an ambulance about an hour to get there. Her brother and sister, Michael and Myah, got to the scene around the same time the cops did. They called Durr and Mckinzie. “Mom got shot,” they said.

Mckinzie and her husband called Washington's phone and two random people answered. “What’s going on? What’s happening?” Mckinzie said. Not wanting to be the bearer of bad news, they simply told her to come.

Mckinzie said: “That’s how me and her son knew, and we just lost it. It was awful. It was really awful.”

Instead of an open casket funeral, Washington had to be cremated; she was shot in the face. She had recently completed a federal prison sentence for financial crimes, such as identity theft and wire fraud, and was getting her life back on track working at the telemedicine company Teladoc.

In response to the shooting the next day, City Council member Casey Thomas said: “This is something that should’ve never happened. We’re being as proactive and aggressive as we can be in order to make sure that something is done.”

But Durr said DPD hasn’t been communicating with them about the case, and they didn’t do enough to protect the crime scene.

“They haven’t communicated with us at all and that’s the frustrating part,” Durr said. She's also a data strategy consultant and says she's worked with the city on many occasions. "So it’s even more frustrating that they know me and they’re not communicating with me,” she said.

That's why Washington’s family has started looking into the case themselves. At first, they would just go out and patrol the area, taking pictures and videos of the stunt drivers and talking to people in the neighborhood. She said this has gotten them pretty far. Through this, Durr said they’ve also spoken to some of the swingers.

Some of the people Durr has spoken to belong to the group TSNLS Dallas.

Lynetta Washington's family is looking for justice for her killing.
courtesy of the Durr family
Street racing and stunt driving blew up in DFW and across the country during the pandemic. Many of Dallas’ street takeovers in the earlier days of the pandemic were organized by TSNLSDallas, as they’re called on Instagram. “[It] started in March of 2020,” the Instagram user told the Observer in February. “We became the face of Dallas sideshows."

They became experts at evading the police. It seemed at times that they had free rein over the city’s streets. “We know how to move. We are always a step ahead," TSNLSDallas said.

But four months after Washington’s death, the police started catching up with some of the swingers.

One weekend in August, DPD arrested dozens of people during 11 street takeover events. They also handed out 16 citations to spectators.

In September, House Bill 2315 took effect, which allows law enforcement in some circumstances to seize and possibly forfeit someone's car as part of an ongoing effort to clamp down on street racing.

First-time offenders still won’t get their car seized or forfeited unless they’ve injured someone or were driving while intoxicated. For any offense after that, stunt drivers risk having to get a new car. State Reps. John Turner and Morgan Meyer filed the bipartisan bill based on DPD's recommendations and constituent comments.

The takeovers continue in some parts of town though. Mckinzie said she still hears the street takeovers in Dallas at night. “It’s so triggering to hear that knowing that the person who killed her could be down there just having a great time and we’re still here with no answers,” she said.

Durr said she’s told the police that if they don’t do something about her mom’s death, things like this are going to keep happening. “That’s what I told the officer, too,” Durr said. “‘You’re not setting a good precedent. You’re basically saying it’s OK if you do it in an area of town where we don’t care about the people.’”

DPD still insists the shooting was an accident and that no one meant to kill Washington. Her family still thinks otherwise and is determined to get justice. “I need this story to be told, however it needs to be told, I will make sure it will get told so we find the answers we need,” Durr said.
KEEP THE DALLAS OBSERVER FREE... Since we started the Dallas Observer, it has been defined as the free, independent voice of Dallas, and we'd like to keep it that way. With local media under siege, it's more important than ever for us to rally support behind funding our local journalism. You can help by participating in our "I Support" program, allowing us to keep offering readers access to our incisive coverage of local news, food and culture with no paywalls.
Make a one-time donation today for as little as $1.